This story reflects on an old community pool from Govanhill, Glasgow’s most multi-cultural neghbourhood.

The pool is now derelict and awaiting renovation – the comic depicts a donation event at the pool, collecting clothes for refugees, and the xenophobia of one taxi driver. 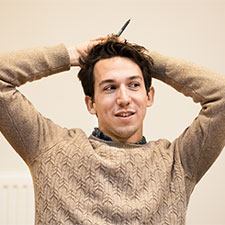 He works with a hand-painted aesthetic, playing with texture, pattern and colour to create a sense of lightness and economy.

His illustrations have appeared in a range of publications and exhibitions, both in the UK and overseas. His clients include Assemble, The Independent, Royal Opera House, Vintage Books and Scottish Book Trust.

As a character I include the woman in the Finns Party's youth section (Perussuomalaiset nuoret) logo, as I find nationalist imagery fascinating.

The Rise of Ireland’s Right Wing

Ireland's Fergal McCarthy provides an outline of some political events and trends surrounding immigration and racism in recent years in Ireland.