Populism and nationalism are spreading all over Europe and beyond. The Internet play a decisive role when it comes to distributing information and propaganda.

It is not always easy to tell apart truth from lies or to dismantlE internet manipulation; it is important to understand how the differnet information channels work and to train our media awareness.
Here is a little illustrated introduction and a useful KIT FOR MEDIA AWARENESS.

*T-Shirt: llustration of twitter echo chambers. Followers of Hillary Clinton and followers of Donald Trump hardly connect and therefore are not aware of the other's world views.
NZZ / VICE 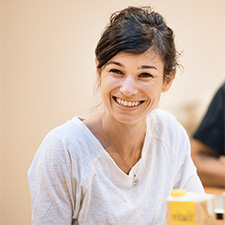 She has authored several books, three of which have been included in Stiftung Buchkunst’s annual list, The 25 Most Beautiful German Books. Her illustrated work has been published in a variety of international magazines and newspapers, such as ZEITMagazin, Das Magazin, FAZ and Kurier.

Klobouk is involved in advocacy for intercultural communication and against xenophobia. She initiated the project Bildkorrektur, which served as source of inspiration for Picture Politics.