Hasan and Hans are born at the same time, although in different parts of the world and under different circumstances.

While Hasan in Afghanistan has to deal untiringly with ever changing political challenges and relentlessy seeks solutions, Hans very soon founders, despite the considerably smaller obstacles he faces.

What and who decides about our path in life, and why should the chance factor of nationality be the all-decisive yardstick? Only when we understand that all human beings are equal individuals, without dividing them into national, religious or racist categories, will it be possible to exist together without fear and violence. 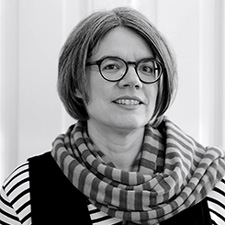 Birgit Weyhe - Private | Photo: © Sabine Reinecke Birgit Weyhe was born in 1969 in Munich, Germany. She spent her childhood in East Africa before moving back to Germany to study in Konstanz and Hamburg. In 1997 she earned a Master’s Degree in German Literature and History. In 2002 she began studying illustration at the Hamburg University of Applied Sciences. She completed her studies in 2008 and she now works as a comic book artist.

Her graphic novels have been nominated for several prizes and her latest book Madgermanes won the Leibinger Comic Book Award in 2015 and the Max and Moritz Award in 2016. On behalf of the Goethe-Institut she has given lectures on her work, as well as various international workshops. She has spent time in São Paulo and Helsinki as part of artist exchange programmes. She has been teaching at the Hamburg University of Applied Sciences since 2012.

Weyhe lives with her two children and her partner in Hamburg where she continues to create and instruct throughout the artistic community.

All Comics on the topic


We Are All Foreign