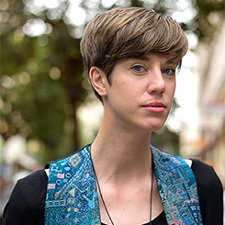 On New Year's Day, 1986, Karolina Chyzewska decided it was just the right time to face the world. Born and raised in beautiful Göttingen, she felt very much at ease with her Polish family around her. After school she went to study at the Kunsthochschule Kassel where she specialised in comic and animation.

In 2012, she spent a term at the Kraków Academy of Fine Arts, Poland. After her return she participated in several exhibitions and smaller publications with her art collective Die Goldene Discofaust and also took her arts degree.