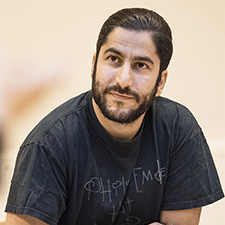 Hamed Eshrat was born in Teheran, Iran, in 1979, a period of political turmoil and inspiration for his first graphic novel Novel Tipping Point - Téhéran 1979.

After his family came to Germany, he studied visual communication in Berlin and Wellington, New Zealand. Hamed Eshrat works as a comic artist and graphic designer in Berlin. He has worked for a variety of magazines and newspapers including Tagesspiegel, Le Monde diplomatique, Das Magazin, as well as various publishing houses and agencies.

His last book Venustransit was released in November 2015 and became a cult book.