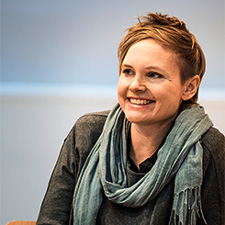 Sara Granér was born in 1980 and is today one of Sweden’s most well-known satirists and artists.

She debuted in 2008 with the collection of comics Det är bara lite AIDS and her works have since been published in numerous magazines and newspapers, such as Galago, Aftonbladet, ETC and Dagens Nyheter. In 2010, she was awarded the Swedish EWK-prize and in 2013 the cultural prize of the region Skåne (Scania) in the South of Sweden. Her latest work Blixt från oklar himmel (2017) is written in rhymes.