Fleeing Afghanistan “One day, I will return”

Afghan photographer Fatimah Hossaini has been living in exile for the past year and continues to stand up for the rights of Afghan women – through her photographs she wants to commemorate them.

Ms. Hossaini, you are one of the refugees from Afghanistan who spent days at Kabul Airport waiting for a rescue flight abroad after the Taliban took power in August 2021. In the end, France accepted you and today you live in Paris. How have you settled in there?

I would never have thought that I would ever be forced to live as a refugee again. My grandparents fled to Iran during the Soviet war in Afghanistan. That is where I grew up. But although we lived there for a long time, my family always had refugee status. We were never recognised as citizens. For me, that was a reason to return to Afghanistan. And now I am sitting here in Paris and have become a refugee a second time. That is a traumatic experience. The pain of having lost Afghanistan is always with me. But on the other hand, of course, Paris is an exciting city, especially for an artist. I am very grateful to France that I can be here. France saved my life. And my career.

In spite of having to fear dreadful consequences, courageous women in Afghanistan have demonstrated against the Taliban’s policies contemptuous of women. Are there still such protests?

In the more than twenty years since the Taliban first ruled, a new generation of women has grown up. These women are not willing to submit to the Taliban’s rules. They are continuing to protest. I very much admire them because they are taking a great risk. Their strength and resilience have always impressed me. That is something I also try to reflect in my photographs. They too show the resilience, beauty and hope of Afghan women. These women want more than equal rights under the constitution, they want to be free.

The Taliban promised to respect women’s rights. Was that just an empty promise?

The Taliban have not changed. They are terrorists. They know nothing about the women in Afghanistan. Yet, then as now, they have chosen women in particular as the target of their terror. Men can continue to get on with their work, they can move freely. Their everyday life carries on much as normal, whereas the life of women has been extinguished. Women have disappeared from society.

When I wake up in the morning, I think about what I would do if I were in Afghanistan.

How are the female artists who remained in the country coping?

To be honest, it has to be said that female artists, and male artists too, did not have an easy time of it even before the return of the Taliban. In a conflict zone, the government has little interest in art. It does not provide any funding. So it was a challenge to be an artist, even during the time of the republic. Now, of course, the situation is very different once again. How is anyone supposed to think about art when they are being denied basic rights? The Taliban have shut down the art faculty at Kabul University where I used to teach. My female students are now sitting at home. They are making self-portraits or taking photographs out of the window to capture the mood outside.

You are experiencing developments from afar. How does it feel for you not to be able to live in your adopted home country anymore?

It is hard to put into words what that means to me. My soul is broken. But I try to keep on raising my voice for the women who still live in Afghanistan. And I try to pursue my artistic work. For me, that is another way of sending a signal that women from Afghanistan do not simply accept their rights being trampled underfoot.

You only moved to Kabul in 2018. What led to that decision?

I had always longed to go to Afghanistan, the country of my grandparents. When I went to Kabul for the first time in 2013, it was wonderful. I felt much freer than in Tehran. I could say what I thought there, without fear of arrest. Also, there were no dress codes for women, unlike in Iran, for example. I could move freely and flourish as an artist.

Before the Taliban took power, Western media reported in particular on attacks, poverty and the difficult living conditions of women in Afghanistan. How does that fit in with your perceptions?

A very one-sided picture of Afghanistan was presented abroad. The security situation was very poor, it is true. There were many terrorist attacks and targeted killings. But in all the darkness, there were many lights of hope in Kabul. Women sat in cafés, worked, set up businesses or went to university. My seminars at the university were even attended by more women than men.

In your artistic work, you have consciously shown this other side of Afghanistan, putting the focus on women. What did you find particularly inspiring?

When I was out and about with my camera in the streets of Kabul, I met many interesting women. They have individual stories and very different characters. They are beautiful and strong. In the country, too, the women stand out in their brightly-coloured clothes made from traditional fabrics. That is something I absolutely wanted to show to counter the image the world has of Afghan women – anonymous figures in a burka. I also wanted to change the narrative of the burka. One of my pictures shows a woman sitting at the steering wheel of a car, her burka thrown back, smoking a cigarette. Smoking is a symbol of her freedom which even the burka she is forced to wear cannot take away from her. 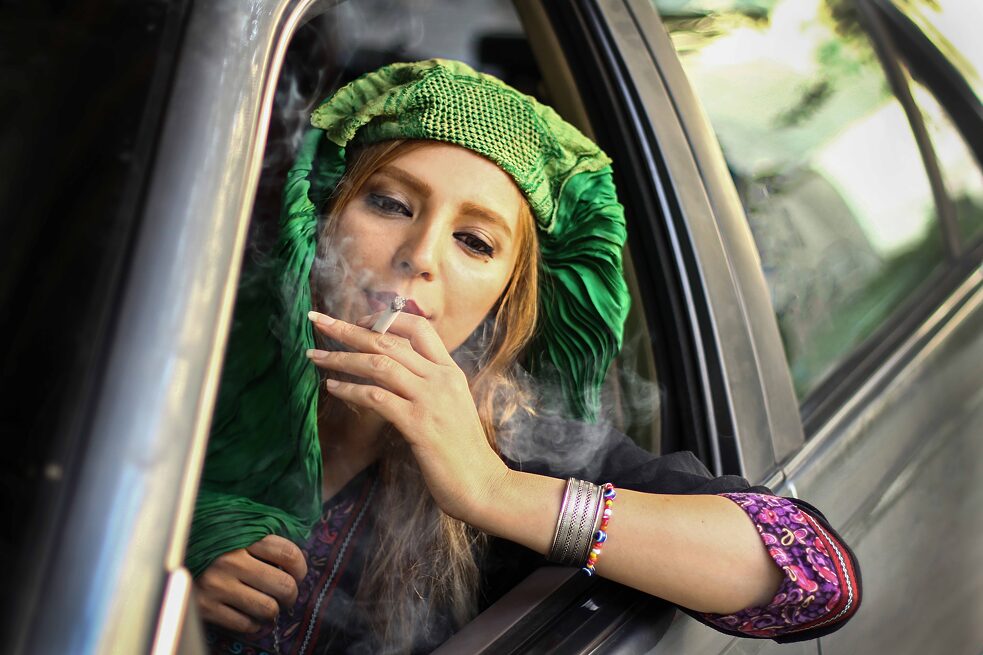 "Smoking woman in burqa behind the wheel" is probably the best-known photo by Fatimah Hossaini. It is part of a series in which she shows women in burqas from a different perspective.. | Photo: © Fatimah Hossaini

What is the situation of people in exile, particularly women artists, who, like you, have left Afghanistan? Do they receive support?

I personally receive a lot of support. For example, I was invited to present my pictures here in France at the photography festival Visions de l’Orient in La Gacilly. It was a very emotional moment for me to see them there. Other female artists I know can also pursue their work in exile.

Do you network with one another?

I am in contact with many artists from Afghanistan who have fled. They are scattered all around the world. We are all suffering as a result of being cut off from our culture. How can you engage in artistic work under such circumstances? Here in Paris, I meet many Afghans in an atelier set up by an aid organisation for artists in exile. That helps us to come to terms with the difficult situation and to carry on.

What possibilities do female Afghan artists in exile have to influence political developments in Afghanistan?

I don’t think that we can change the political situation. But as artists, we can tell stories about the people in Afghanistan, about how their life used to be and how it is now. In that way, we can help to make sure Afghanistan is not forgotten.

In your work, you are now addressing the subject of women in exile by photographing prominent women from Afghanistan in their new life situation. What exactly do you want to show?

I see it as a continuation of my series of photographs Beauty amid war. Exile is another aspect of the war. And here, too, women have maintained their dignity. But the burden of exile also finds expression. For example, I photographed the actress Yasmin Yarmal with her daughters on the run-down staircase of their Paris accommodation, and the singer and actress Shegofa Ibrahimi in a dreary back yard in Lyon.

Do you dream of returning to Afghanistan one day?

I dream about it every day. When I wake up in the morning, I think about what I would do if I were in Afghanistan. But when I was accepted in France, I had to sign to say I would not travel to Afghanistan anymore. My Afghan passport was taken away. Emotionally, that is very hard for me. But one day, I will return. For sure.

Ulrike Scheffer works as a freelance journalist and author.