Urban ports are not exactly known as sources of biodiversity. At least in New York this hasn’t always been the case. The Billion Oyster Project aims to turn the city harbour into a functional ecosystem again – with the help of oysters.

A grade schooler who has hardly ever left the huge city she calls home is incredulously holding a crab in her hands for the first time. It’s clinging to the outside of an oyster, and the girl can see colourful fish swimming around amongst the shells in the water below. She’s not even at the beach – this is Governor’s Island, a little island in the middle of New York Harbor with the iconic skyline stretching out behind. Helene Hetrick of the Billion Oyster Project (BOP) enjoys reminiscing about scenes like this. “So many people still think that New York Harbor is dirty and lifeless, so spotting a seahorse completely changes their perspective on the local environment,” says Hetrick in the video interview. 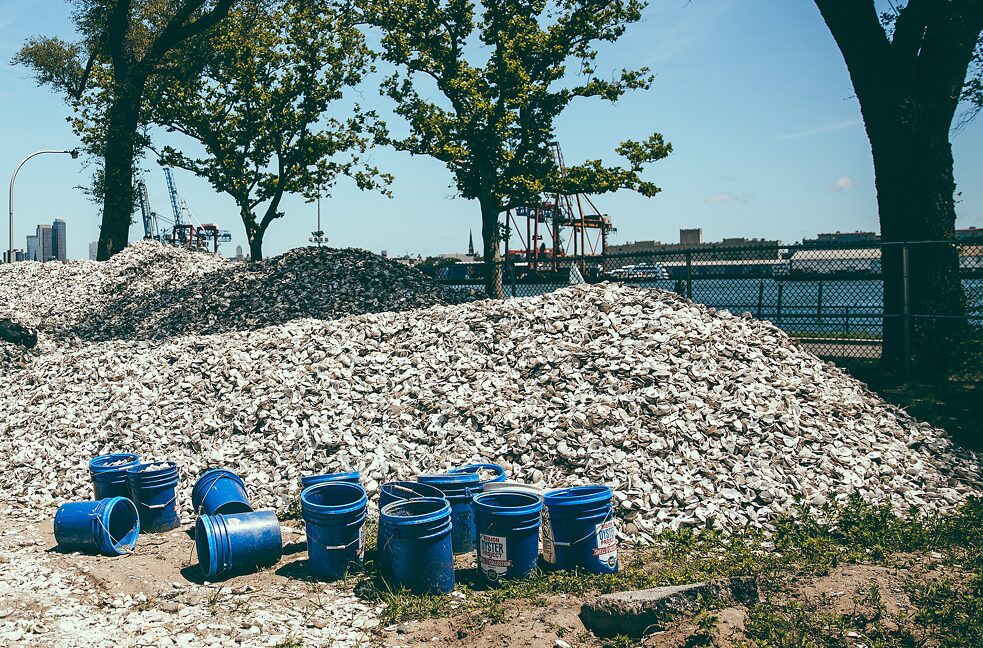 The oyster larvae need a shell substrate on which to grow. | Photo (detail): © Billion Oyster Project That’s just one of the effects the Billion Oyster Project hopes to achieve. The plan is to restore a billion oysters to New York Harbor by 2035. A number that seems inconceivably large – but in former times the US metropolis was known as the world oyster capital, with more than 800 square kilometres of reefs. However, their population shrank rapidly in the early 20th century due to overharvesting for food and increasing industrialisation.

Pete Malinowski and Murray Fisher initiated the BOP project in 2014. Malinowski grew up on an oyster farm himself. In the interview, he recalls with a smile how going out on the boat as a child felt like being out in his own front garden. Fisher was one of the co-founders of “The Urban Assembly New York Harbor School”, a high school on Governor’s Island that came into being through BOP, where students focus particularly on maritime specialisms alongside traditional academic subjects.   But why oysters, why are they so valuable to the marine ecosystem? How can restoring them work as a step towards sustainable urban development? “The most important reason for oyster reefs is that they create a habitat for a number of species, such as small fish, which provide food for seabirds and marine mammals,” explains Hetrick.

Apart from that, an adult oyster can filter more than 200 litres of water per day. “They’re little ecosystem engineers,” continues Hetrick, “the closer you get to the reefs, the more the underwater visibility improves.”

They also have a highly practical purpose for the city residents. All over the world climate change is causing increasingly extreme weather phenomena. Located just ten metres above sea level, storm surges are a worsening problem for New York. A wide stretch of reef probably wouldn’t prevent hurricanes but it might weaken their intensity, like a natural breakwater. “One billion oysters are not enough to build up this once-stable barrier, but it’s a start,” explains Hetrick. It is more of a guide value for the project. Even if a single oyster only filters around 120 litres of water a day, a billion could clean the whole harbour every three days, as calculated by Fisher and Malinowski. But the real hope is that the number of oysters will help regenerate stocks by attracting more oysters into the harbour. They call it recruitment. 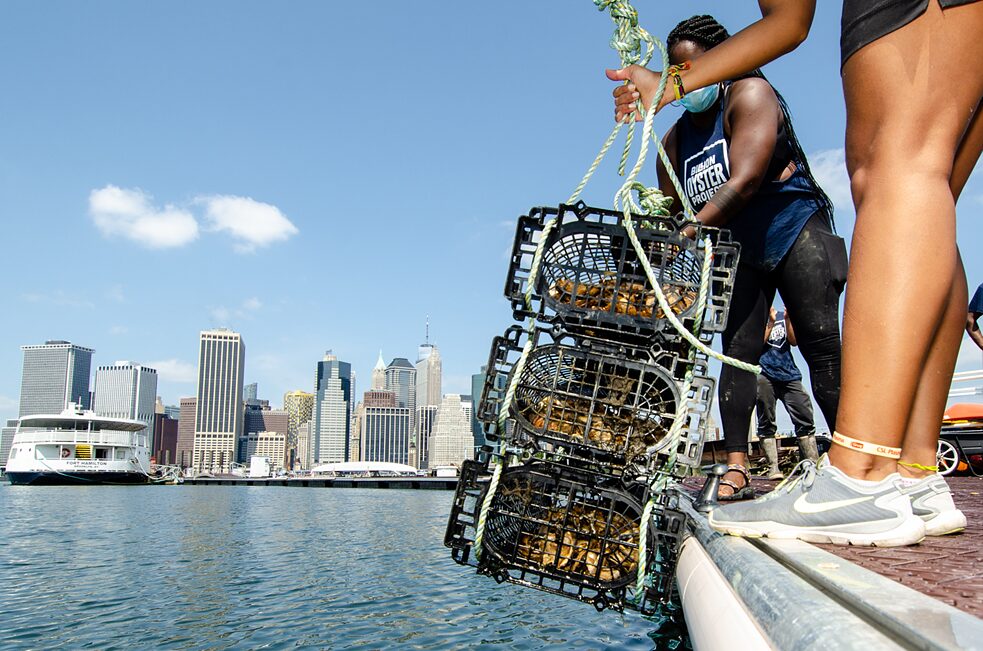 It isn’t a good idea to eat these shellfish. “Because they filter water as they eat, whatever’s in the water is brought into their bodies,” Hetrick warns. If the water’s polluted, the oysters are not edible and can even make you sick. Yet the Billion Oyster Project is dependent on oysters being eaten – just not the ones from the harbour itself. Leftover shells are collected from restaurants in New York for the project, so that the free-swimming larvae can find an appropriate substrate on which to settle, and they can then form their own shell around themselves. It seems like a contradiction that BOP gives away vouchers for oyster restaurants whilst at the same time campaigning for every single oyster in New York Harbor. “Of course, that sounds crazy, but most of those oysters are specifically farmed for food,” explains Hetrick. Without the shells from the restaurants, they wouldn’t have been able to restore this many oysters already. “Oysters are still part of New York City culture. This way we can still benefit from eating them.”
With regard to cities undergoing constant growth, the question arises as to whether this solution is too specialised to implement elsewhere. Oysters need a certain level of salt in the water. “But I think that natural methods could be revived in all coastal towns and cities – methods that became lost in the course of urban development,” says Hetrick. 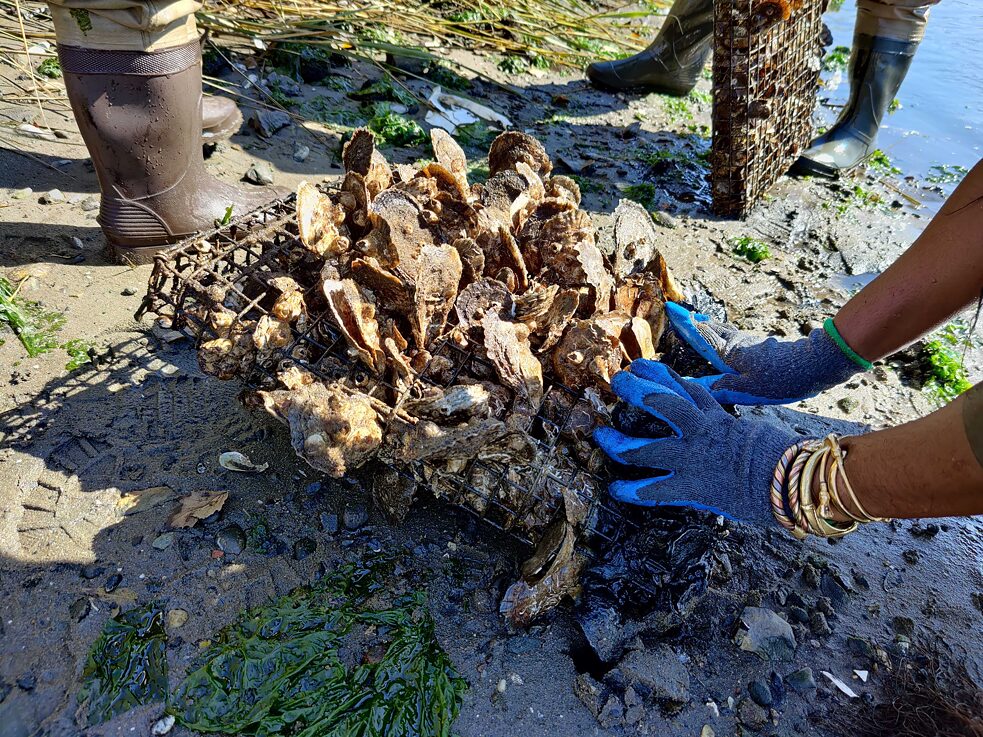 The oysters use the old shells as a substrate, forming their own shells and boosting the ecosystem. | Photo (detail): © Billion Oyster Project

Nature Has to Take Control at Some Point

The sustainability aspect is just one focus of the BOP project. The team is hoping to raise awareness through cooperation with the New York Harbor School and other schools. “For me the best experience is seeing how the schoolkids are starting to reclaim the harbour again,” says founder Malinowski.

To achieve their goal of a billion, the project needs to ramp up speed a little: last year they added 17 million oysters, so altogether that makes 47 million. Applying for permits and funding from sponsors took up a lot of time as well. The oysters themselves need to do their bit – for instance recruitment. The thing is, Hetrick is certain: “The process can begin as a man-made one, but Nature has to take control at some point for the project to really thrive.” 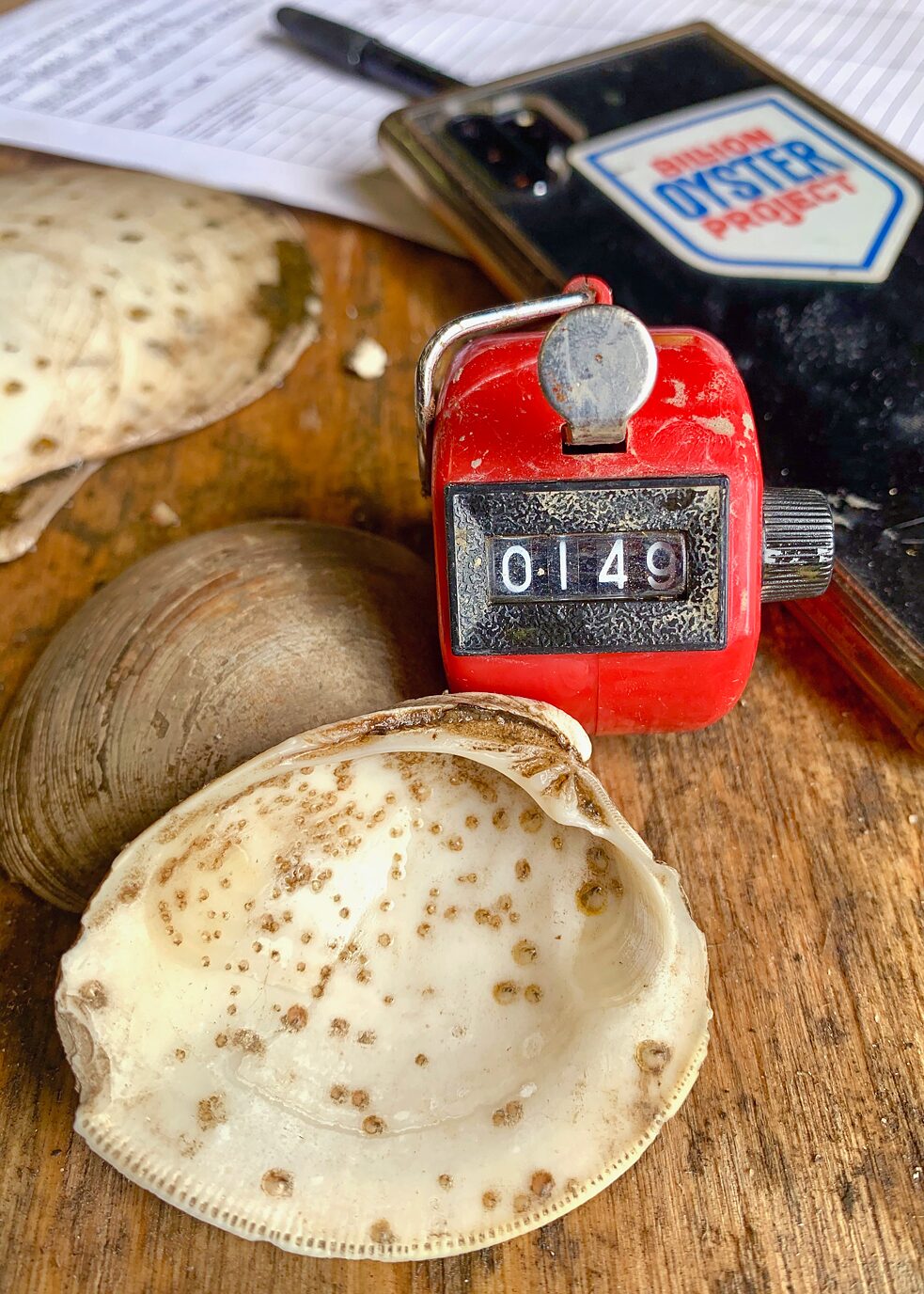 They need to count a billion: as well as checking the juvenile oysters’ growth status, the crew and volunteers need to make sure the project’s on track in numerical terms. | Photo (detail): © Billion Oyster Project

How Can the Urban Boom Become an Ecological Miracle?

All over the world cities are growing almost unchecked. Globally the urban population could almost double by 2050. This will involve traffic chaos, use of energy-intensive building materials like steel and concrete, displacement of ecosystems. Yet cities in fact have the potential to be exceptionally sustainable – because residents there are sharing infrastructure in a small space, which in turn saves resources and energy. In our feature stories on the subject of the urban boom, different authors look at three approaches and ask how urbanisation can be implemented sustainably.

Natascha Holstein is a member of the online editorial team at the Goethe-Institut head office.