Car-Free Zones in Montreal Neighborhoods Are for People, Not for Cars

Mont-Royal Avenue, one of the Plateau’s main commercial street, was closed to traffic for several months in 2020. The project, designed to help businesses struggling with coronavirus restrictions, was a huge success and is set to be repeated in 2021. | Photo (detail): © Goethe-Institut Montreal

In 2009, the Plateau-Mont-Royal neighbourhood in Montreal was ridden by heavy and dangerous traffic. The mayor of the borough had other ideas and pushed through a radical concept of appeasement against significant resistance.

Standing at the corner of Laurier Avenue and Saint-Hubert Street in Montreal, one can contemplate how transformative Luc Ferrandez’s tenure as Plateau-Mont-Royal borough mayor has been. Today, it is a staple of a calmer street, featuring a mix of hard and soft design, with a green curb extension on one corner and two street-painted, four-season bike lanes. Just ten years ago, this was a traffic-ridden, accident-prone intersection with narrow sidewalks.

In 2008, it was identified as one of Montreal’s most dangerous intersections. The previous year 53 accidents were reported at that single corner. There were accidents every year involving school children.

From 2004 to 2008, Marie-Soleil Cloutier, now a professor at Institut national de recherche scientifique, worked with the Montreal Public Health Department mapping data from traffic accidents. The maps displayed hundreds of incidents happening all across the city, including many street corners on the Plateau, where thousands of cars drive by daily to and from the Montreal downtown core.

“There was a high step to climb” to change the prevailing mindset, she says noting there was “a lack of understanding of the general problem” both from elected officials and civil servants in those years. 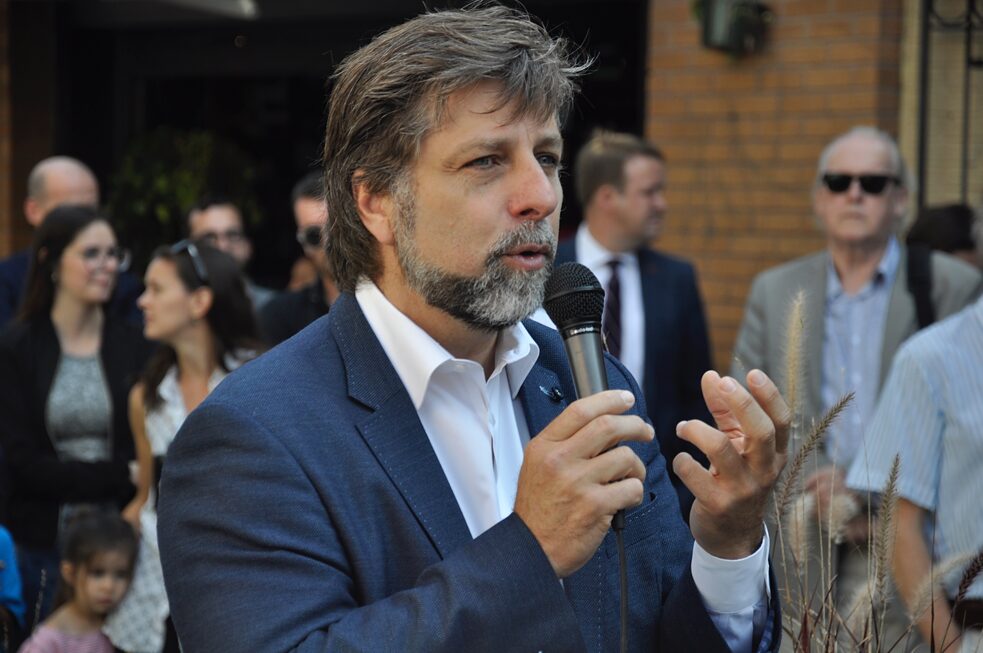 Luc Ferrandez was the Plateau-Mont-Royal borough mayor from 2009 to 2019. Most of his focus over a decade was centered around building greener and safer streets and public spaces. | Photo (detail): © Simon Van Vliet Luc Ferrandez says he felt a sense of “emergency” to make streets safer when he took office in 2009. But he mostly wanted to reclaim the space that had been taken by cars and give it back to people.

“The car was eating up everything, eating up space,” he recalls.

The program was simple and radical: make neighbourhoods for people to live in not for commuters to drive through.

The Plateau as a Forerunner

He started by converting a two-way ten-block stretch of Laurier Avenue to a one-way. The overhaul was the first of many changes Ferrandez would bring to make streets safer and reroute transit traffic to main roads. The transformation was designed to calm traffic, give more room to cyclists and pedestrians but also to integrate ecological runoff water management and space for trees, shrubs and plantations.

The local administration closed roadways that ran through parks and changed the direction of several streets to divert traffic. 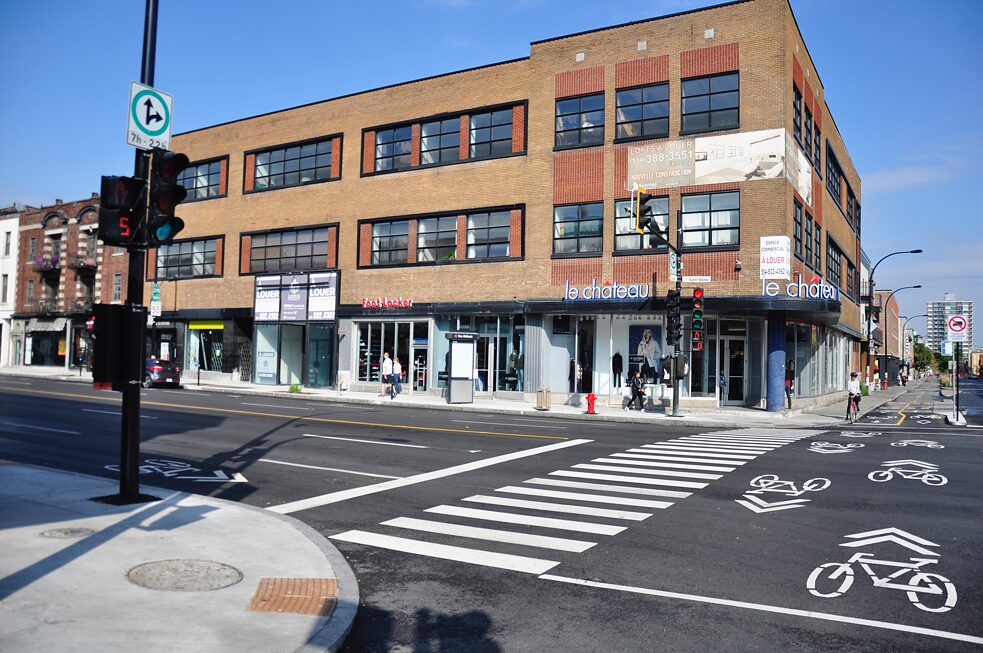 Saint-Denis, one of the Plateau’s main commercial street, used to be a car-centric, four- to six-lane thoroughfare. Two lanes have since been removed to create space for high capacity bicycle lanes on either side of the street, which now connect with one of Montreal's busiest bike lanes: a two-way, four season bicycle path on Rachel Street. | Photo (detail): © Simon Van Vliet “They went in like bulldozers,” says Marie Plourde, Mile End district councillor and president of the city’s Transportation Commission. “It shot up everyone’s daily life, especially for business owners,” she recognizes. Plourde remembers facing a climate of “open war” with the local business community and Ferrandez’s party, Projet Montreal, when she joined his team for the 2013 election.

“The Plateau was the forerunner,” he says. “No one was talking about sustainable mobility. It wasn’t an integrated approach,” he says, noting that some drastic changes were executed apparently without very much planning or consultation. Ferrandez was, in fact, following orientations from an urban mobility plan voted just before he came to power, which put improved environmental quality as one of its main orientations. 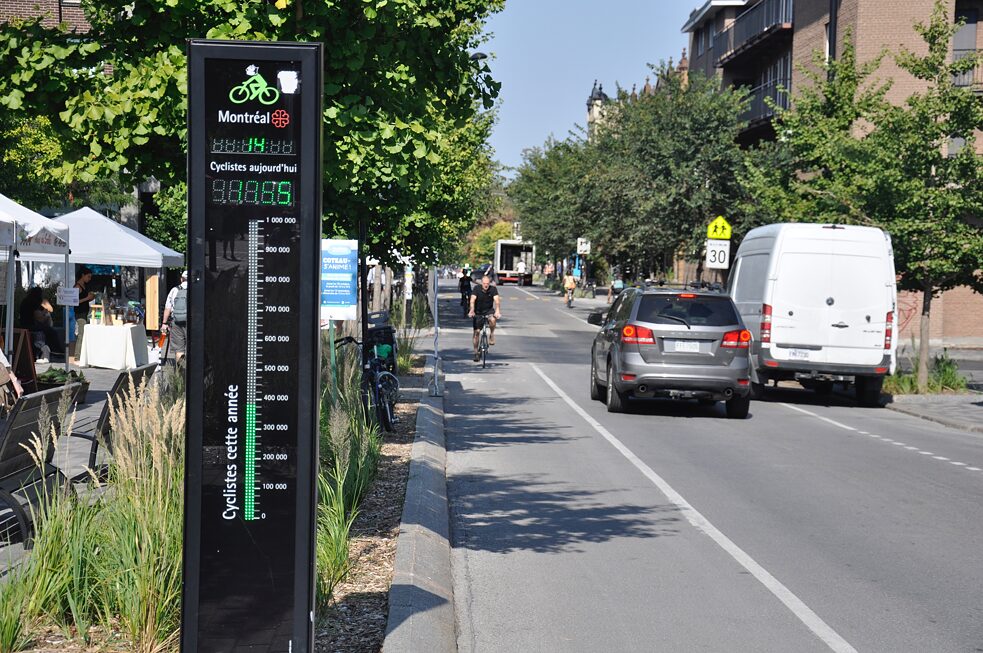 The bike lane on Laurier Avenue has become one of the most popular in Montreal. Since 2011, over 5,8 million cyclists have rolled by, according to statistics compiled with an interactive counter. | Photo (detail): © Simon Van Vliet Marie-Soleil Cloutier says this became Ferrandez’s focus during his first campaign. “His discourse wasn’t even about road safety, it was really about quality of life at the neighborhood level,” she recalls.

While his traffic calming agenda – and the opposition it spurred – dominated headlines during his first term in office, Ferrandez also implemented a tree plantation program and multiplied initiatives to enlarge parks, closing streets in the process where necessary. He never thought twice about it and remains unapologetic. “Never, ever, ever try to have 100% [support]. It won’t work. What you aim for is 50%,” he advises.

Despite strong pushback and loud outcry against his policies, he won a second term and third term with growing majorities each time. This emboldened him to go even further: closing more streets, creating hundreds of green curb extensions, building larger sidewalks and bike lanes.

When Projet Montréal seized power at the central city level in 2017, Ferrandez was promoted to the executive committee as head of environment, sustainable development, parks and green spaces for Montreal. Building on mayor Valérie Plante’s commitment to tackle climate change and protect the environment, he published an “Oath of the Gardener” where he vowed to put the nature before everything, including transit traffic and parking. He quit politics two years later saying the administration’s financial and policy priorities were not nearly radical enough to tackle the looming climate crisis.

Ironically, it’s another global crisis – the coronavirus pandemic – that pushed the administration to implement some far-reaching measures Ferrandez had only dreamed of, this time with active support from the local business community.

No Going Back for Montreal

From mid-June to late September 2020, the city closed a 2-kilometer stretch of one of the Plateau’s main commercial streets, Mont-Royal Avenue, to motorists. “Civil servants worked extremely fast,” Jean-François Rheault notes. He lauds how innovative, quick and flexible the administration was, emphasizing it took less than 8 weeks from planning to design to implementation of projects that would usually take months or years to develop.

Marie-Soleil Cloutier sees this as a culmination of years of experimentation with tactical urbanism, a ‘planning-by-doing’ approach that reshaped the Plateau over a decade. “It really showed everyone that it’s possible to do things like this,” she says.
According to a recent report, businesses on streets that were closed to cars fared better than those on streets that remained open to traffic. This prompted the city to launch a fourmillion dollar-programme to repeat and expand the experience in 2021. 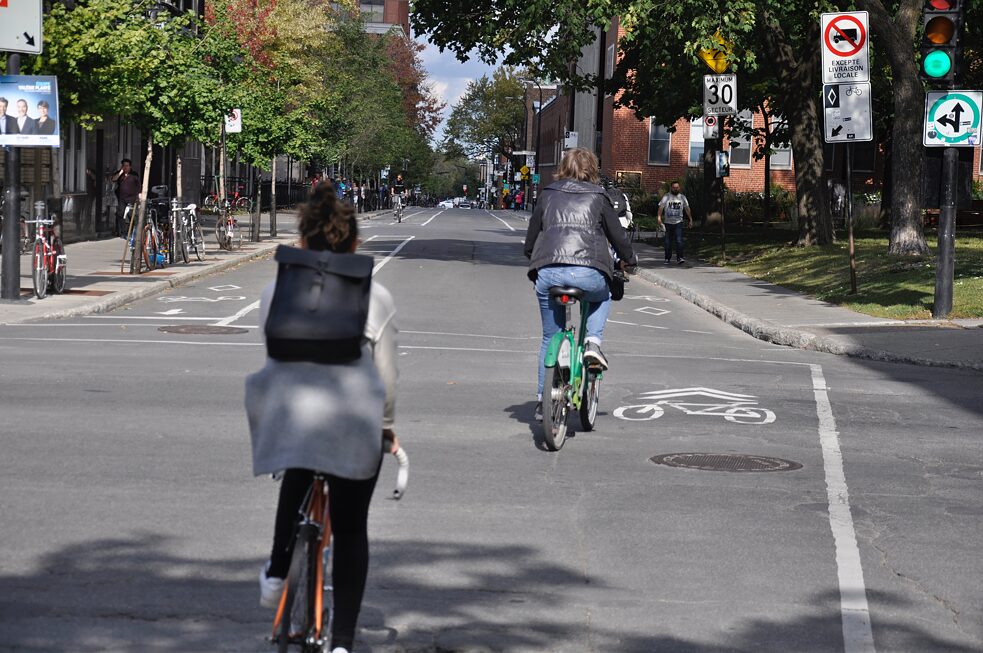 Close to 2.000 people use the Laurier Avenue bike lane every day on a year-round average, and the number of daily user peaks well into the 5.000 range between spring and fall. | Photo (detail): © Simon Van Vliet Last fall, the Plante administration also delivered on a 2017 election promise to create a network of high-capacity bicycle paths, part of which runs along another major commercial street on the Plateau: Saint-Denis.

At least 87 000 cyclists have used the new infrastructure since it was inaugurated in November, making it one of the most popular bike lanes in Montreal. This transformation, like that of Laurier Avenue ten years ago didn’t go unopposed, but it’s a fair bet to say that ten years from now the new design of Saint-Denis will be seen as a hallmark of Montreal’s shift away from car-centric urbanism and towards soft mobility. This way Montreal could be a role model for other big car-focused cities, showing that even though there might be much opposition at first, it could pay off to stick to progressive developments. One thing is for sure, according to Plourde: “There is no going back.”

How Can We Contain the “Car Obsession”?

We live in the age of motorised mobility. Whether plane, ship or car, there is a rapid boom in all areas concerning mobility. According to estimates, there could be two to even three billion cars on earth by the middle of the century. However, increasing car traffic is accompanied by increasing burdens on the climate, the environment, and human health. The promise of autonomy of individual mobility is reaching its limits. In our reports on the topic of "car obsession", various authors look at two potential solutions and examine how a more sustainable mobility can become possible.

Simon Van Vliet is a journalist from Montreal, Canada.