How can we live more sustainable lives – in a world characterized by the coronavirus pandemic and growing mountains of waste? Two examples from South Korea illustrate how recycling and upcycling can be achieved in creative ways.

The Covid-19 pandemic and its effects have dramatically changed the lives of people all over the world. And the population of South Korea is no exception. According to the Covid 19 Impact Report published by market research firm Nielsen Korea, demand for delivery services surged by 19 percent as compared with pre-pandemic levels, from 33 to 52 percent, with the result that the production of plastic waste likewise increased significantly. The amount of domestic waste generated by households in Seoul, the capital of South Korea, rose so drastically that city pavements, where the refuse is generally collected, were regularly inundated with rubbish. According to the Korea Environment Ministry (2019), however, only 41 percent of plastic waste such as polyethylene (PE) and polypropylene (PP) is recycled. The remainder ends up in landfill sites or is incinerated. 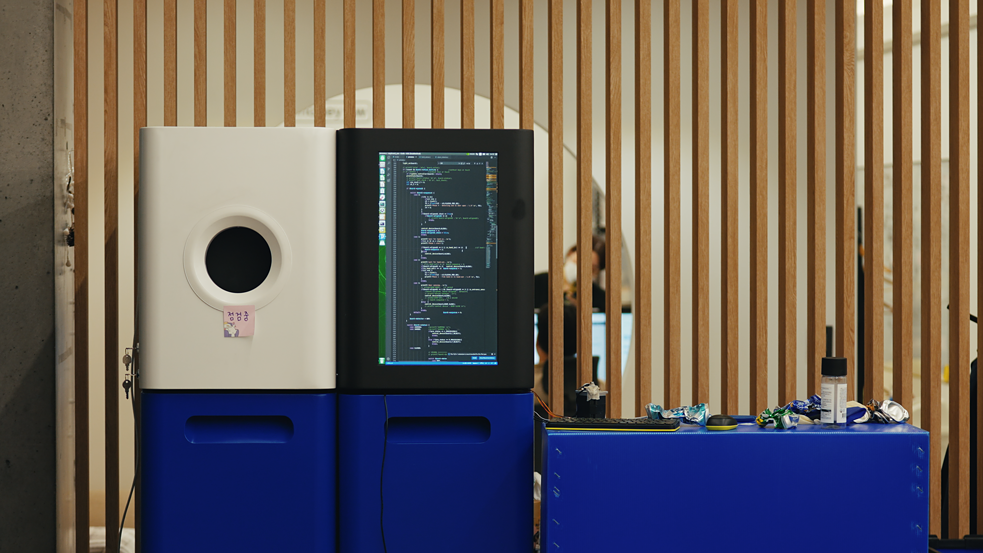 One company that is keen to make recycling easier and more efficient is the Korean start-up Superbin. In 2015 it developed “Nephron”, a reverse vending machine that allows used plastic and glass bottles and cans to be recycled. The principle of Superbin is  simple: like the bottle return systems in German supermarkets, customers place their used bottles or drinks cans on a conveyor belt in the machine. The item is then scanned by a computer using artificial intelligence so that it can be assigned to a particular group of reusable materials. Customers get points credited to their account for each item and can then swap the points for cash. Superbin CEO Jeungbin Kim stresses that “it is vital for the current waste recovery processes in Korea to be further developed and optimized.” Superbin’s declared objective is to create a circular system of value adding and an infrastructure that complements Korea’s existing waste disposal system. For refuse to become a reusable resource, manufacturers have to produce goods. However, people in South Korea are not yet sufficiently conscious of the need to regard recyclable materials as a resource. As things currently stand, it is up to consumers to correctly select products that can be reused. 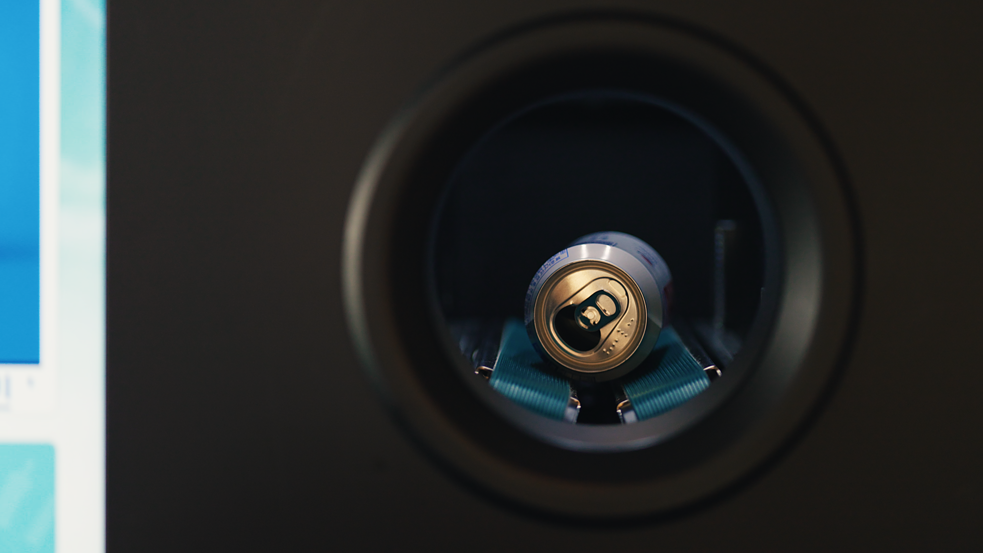 The machine functions in much the same way as German bottle return machines. | Foto: © Hyundong Ju (DIM Studio) The founders of Superbin have understood the problem: they buy high-quality waste from consumers, such as used plastic and glass bottles and empty drinks cans. Because their machines pre-sort the items, Superbin also ensures a higher recycling rate. The plastic waste that has been collected is then turned into recyclable resources. Known as “flacs”, that is to say raw materials such as plastic particles, they are then sold on to chemical companies for a profit – this is the “key” to the so-called “cyclical structure”.

At present, Nephron collects approximately one million drinks cans and 1.5 million PET bottles, plus plastic packaging material, every month. Around 100,000 people in the Korean peninsula now use the reverse vending machines to dispose of their plastic waste – currently roughly 3,000 people per month. At the moment, it is mainly PET bottles that are recycled, as this kind of plastic is very easy to reuse. In the future, however, materials such as cans and polypropylene (PP) are also to be fed into the circular system. 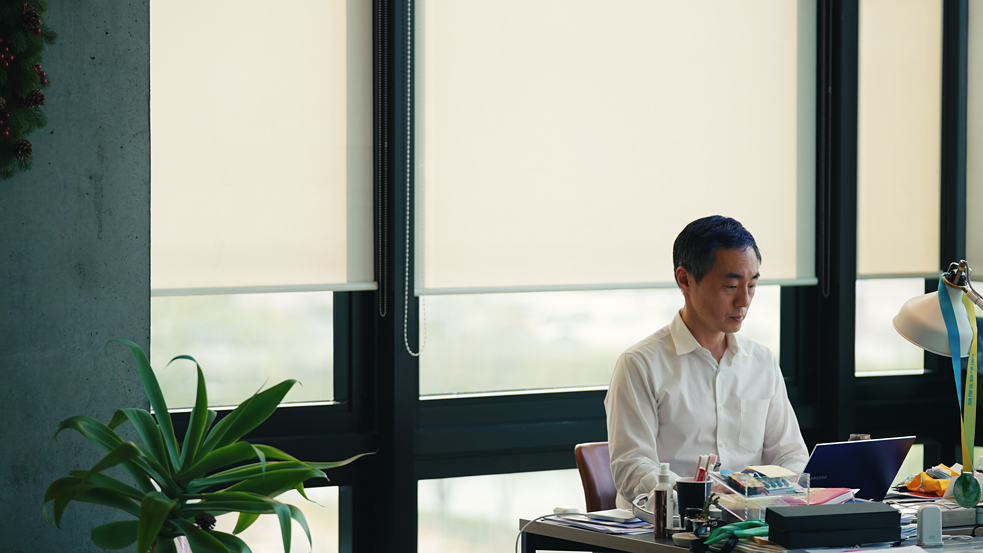 If this recycling system is to become established in Korea, the right attitude is needed, as are active efforts on the part of companies and citizens. This is what Superbin is continuously striving to achieve. During its “SuperCollect” campaign, for example, users can dispose of large quantities of used plastic bottles – around 200 to 300 per person – in a larger version of Nephron. Then there is the “SuperRookie” project: Superbin staff go into schools to teach future generations to have a positive attitude towards waste and to recycle properly. Incidentally, Superbin’s PET recycling facilities also serve as a space for cultural encounters: an exhibition allows visitors to experience how waste is separated and then treated; afterwards, they can engage in a discussion about waste, recycling and environmental issues. 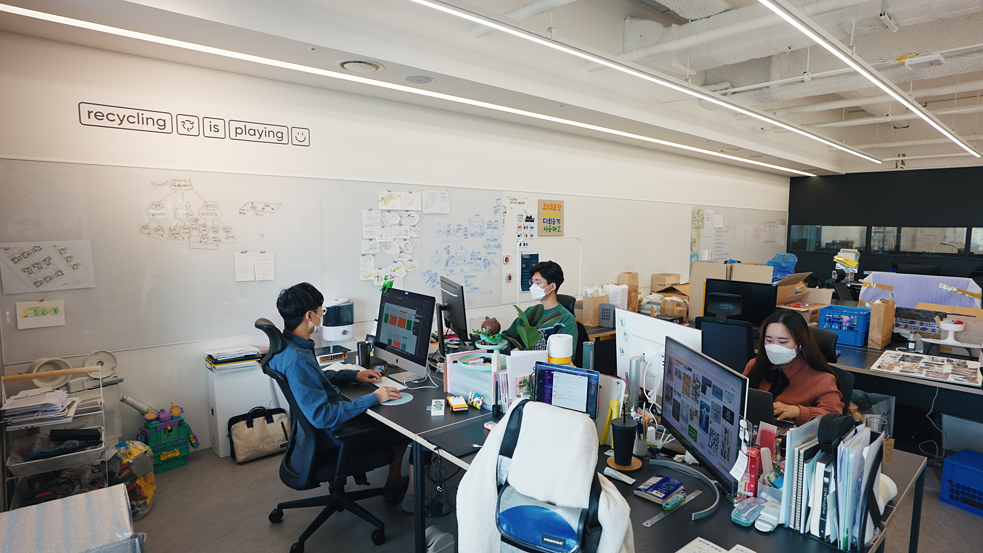 Haneul Kim is a student at the Kaywon University of Art and Design in Uiwang, a city to the south of Seoul. He has come up with a clever idea for recycling waste. Since the start of the Covid-19 pandemic, around 130 billion disposable masks, which are partly made of plastic, are thrown away each month around the world. In a newspaper article, Haneul Kim read that although plastic is normally recycled in Korea, the disposal masks are not. He wanted to change that in a creative way: the student turned the recycled – i.e. melted down – material into colourful chairs, naming his university graduation project “Stack and Stack”.

He set up a collection box for disposable masks on campus. As the masks had already been worn, Haneul also had to find out about any infection risks that his work might entail. To be on the safe side, the design student kept the collected masks in a storage room for four days before processing them. He then used a heat gun to melt the masks down at approx. 400-500 degrees – coronavirus dies at temperatures of around 100 degrees.

The student hopes that his art project will encourage the Korean population to tackle the problem posed by the huge numbers of thrown-away masks. To date, his chairs have only been sold in small quantities to galleries and interested groups. In the future, Haneul is planning to turn the disposable masks into larger pieces of furniture such as tables and lamps, and also to recycle other materials like old clothes and tyres. 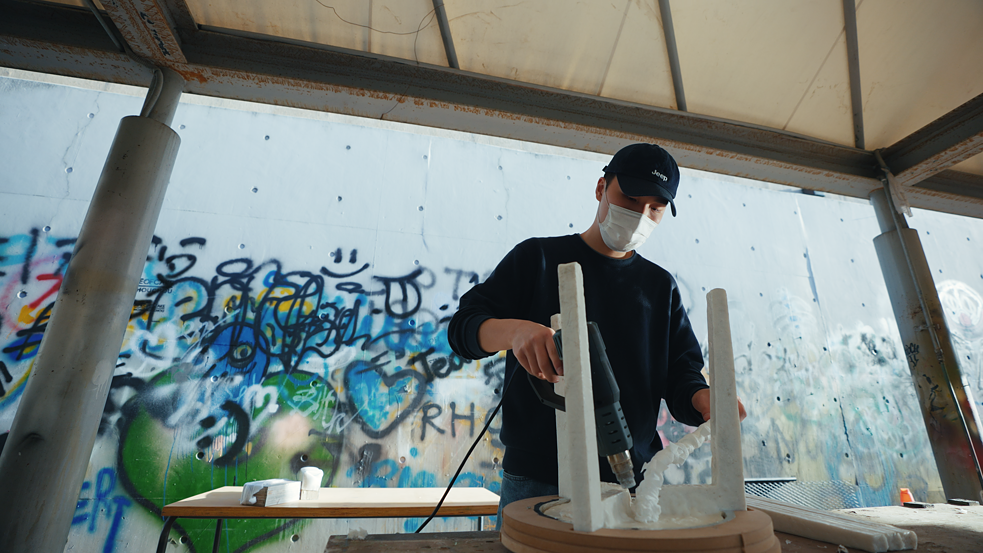 Waste as a Resource

People all over the world are endlessly producing and consuming new things. Upcycling is one way to make our consumer habits less wasteful and more productive. The products we use are not merely waste, but are made of valuable materials.

Nowadays, the coronavirus crisis means that more resources than ever are being consumed and discarded worldwide. Examples like Superbin and “Stack and Stack” reveal that there are various creative ways of drawing attention to the importance of recycling – and of lastingly changing people’s mindsets.

Every person worldwide generates an average of 0.74 kilograms of waste per day. In the global North this is more, in the so-called global South significantly less. Those who contribute least to the catastrophic masses of waste - to e-waste or plastic swirls in the ocean - are affected the most: they lose their homes and in the worst case even their lives to landslides from landfills, they work under unsafe conditions collecting waste and suffer serious health consequences. According to the World Bank, the amount of global waste is expected to increase by around 70 percent by 2050 - if nothing changes by then. In our three reports on the topic of "waste masses", the authors take a look at three approaches to reducing waste and discuss how recycling can become more profitable and safer.

Yunhyung Lee is a journalist based in Seoul.