The garden Huerto Roma Verde offers a temporary escape from the chaos and air pollution that dominates life in Mexico City. It is an experimental community project whose participants are searching for sustainable solutions in response to consumer habits in megacities.

The garden Huerto Roma Verde appears like a verdant oasis amid the desert of cars, noise, cement, bad-tempered people and smog that surrounds it. The moment one passes through the gate, which is constructed out of dozens of blue water canisters piled up in cylindrical fashion, everything suddenly changes and one is greeted by trees, gravel paths, colourful walls made of natural materials and a thoroughly relaxed and calming atmosphere.

“Our goal is to put people in touch with their environment. By raising environmental awareness, we want to bring people closer to nature and thereby to trigger resistance movements and processes of self-renewal and transformation”, explains Paco Ayala, who initiated the Huerto Roma Verde project nine years ago. 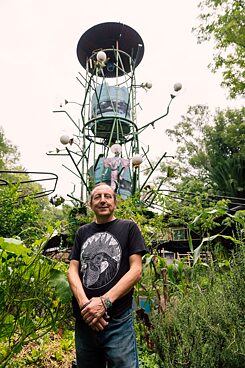 Paco Ayala grew up in the Roma neighbourhood close to Mexico City’s historic centre. He decided nine years ago to transform a plot of wasteland into a socio-ecological experiment. | Photo: © Irving Cabello
The site, which covers an area of nearly 8,000 square metres, used to be part of the Multifamiliar Juárez, a housing estate of several apartment buildings that was destroyed by the major earthquake of 1985. For 27 years the plot was a wasteland and used by neighbours as a dumping ground for their rubbish. Ayala, who describes himself as a “social plumber”, grew up close to the site and decided to give this part of the neighbourhood a new purpose.

As its name suggests, the Huerto Roma Verde is a vegetable garden – but also a lot more besides. In the early days, Ayala and his fellow gardeners established the mandala – which is what they call the interior circle that is home to the raised beds. From there, the project simply grew organically. “The beds in the mandala need regenerated earth, in other words compost”, explains Simón Astorga, who coordinates the garden’s social organization.

Huerto Roma Verde now has a compost corner where organic material is broken down in three different ways; a collection of plant seeds; a recycling centre for solid waste; a storage tower to collect rainwater; a number of farm animals and plenty of space for encounters, including an amphitheatre for events. 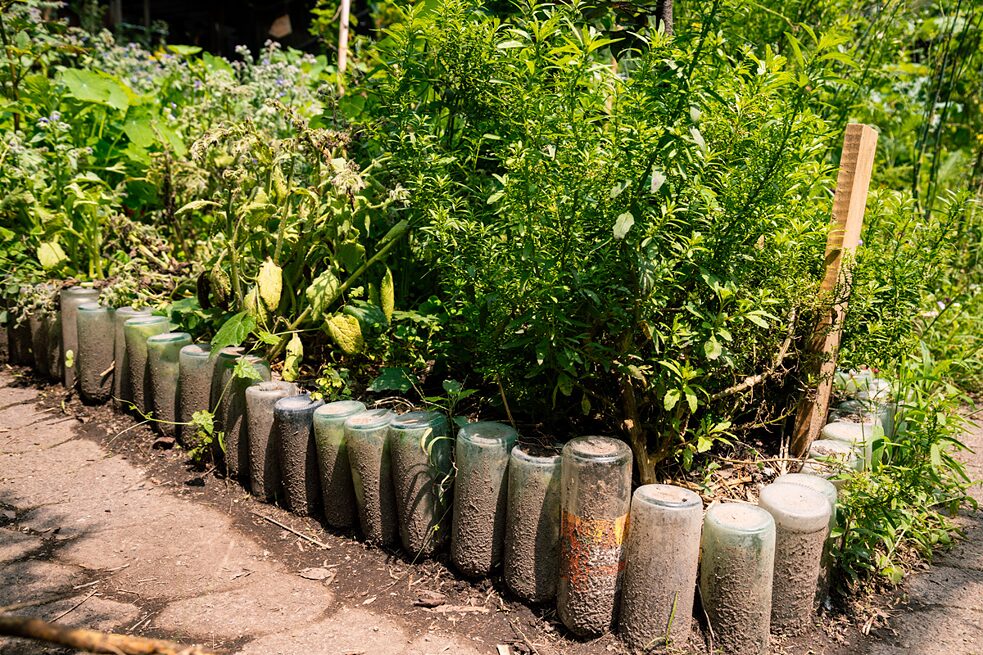 A fully functional raised bed for biointensive vegetable gardening: it is twice as deep as a normal bed so as to provide sufficient space for the roots, soil and nutrient-rich compost. | Photo: © Irving Cabello


Ayala firmly believes that we are facing a paradigm shift similar to that which took place during the Enlightenment era three hundred years ago. As he puts it, it is time for us to be guided by biology, intuitive knowledge and femininity as we move into the future.

The current way in which food is mass-produced is wrecking the planet. According to an Intergovernmental Panel on Climate Change (IPCC) report, roughly 23 percent of human-caused greenhouse gases is generated by the land used for agriculture and forestry. However, if for example deforestation for agricultural reasons is factored into the equation, the global system of food production would be responsible for over 30 percent of such emissions. 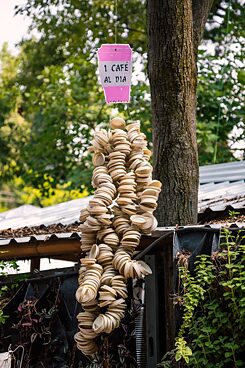 “The question is: How can mother Earth be destroyed by a coffee? The answer is: With one disposable cup every day”, says Símon Astorga, who coordinates the garden’s social organization, pointing at an installation of plastic lids attached to a tree. | Photo: © Irving Cabello It is not only the production of food itself that has a major impact on our planet, however, but also our overproduction and wastefulness. According to a report from the UN’s environment programme and the British organization WRAP, over 931,000 tons of food were wasted in 2019, which equates to around 17 percent of worldwide production. In Mexico, households waste on average 94 kg of food per year. Mexicans are therefore among the biggest producers of food waste in Latin America.

If this waste is not disposed of properly, dangerous methane and carbon emissions are released that play a key role in driving forward climate change. In Mexico City alone, around 13,000 tons of waste are produced each day; that’s over one and a half kilos per person. “We live in a consumer society in which large quantities of solid and organic waste are generated. We need to deal with this waste differently in the future, and we should consume more consciously”, is how he sums up the challenge.

Ayala firmly believes in the social impact of Huerto Roma Verde, which is why he has defined three clear objectives in his work: resistance, autopoiesis – or self-renewal – and transformation, i.e. rearrangement and balance. To achieve this, the social fabric needs to be renewed – which is precisely the task that the project has set for itself: to establish a network through which to repair the damaged link between Earth and humans.

A Rebellion Against the City

Experimental solutions to the environment crisis are put into practice at Huerto Roma Verde. Of course, one fundamental part of this is the growing of food: organic, seasonal, regional and full of nutrients. The food that is produced here is sold to local residents and nearby restaurants. Seeds are exchanged and planted to maintain a certain degree of diversity. No artificial fertilizers are used, for nature contains everything that the plants need. 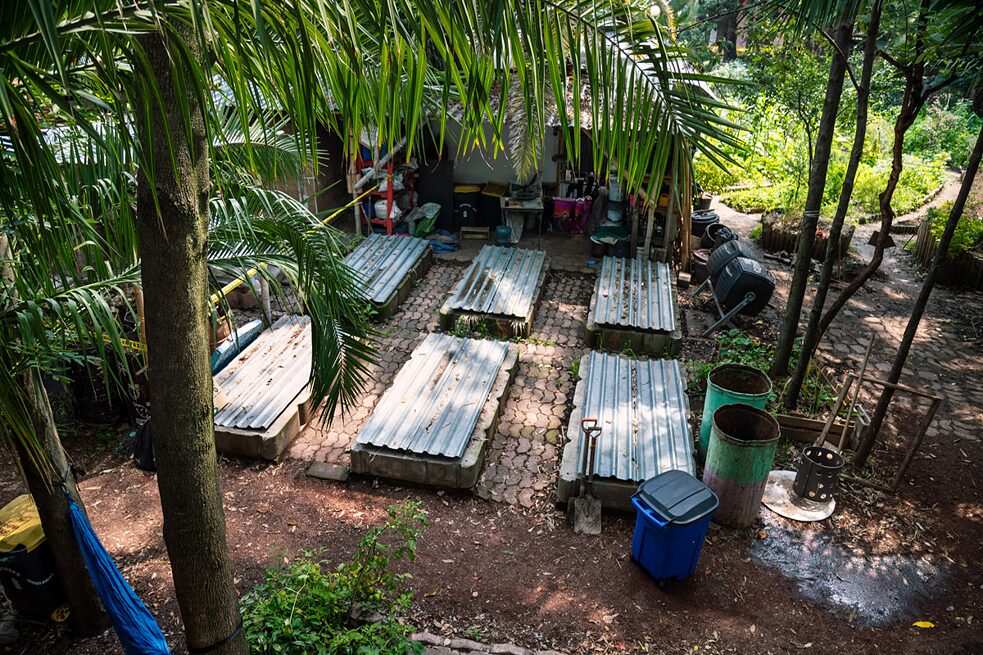 In the composting section’s wormeries, Californian redworms are used to turn chopped up organic waste into humus, one of the best natural fertilizers. | Photo: © Irving Cabello A project entitled Reciclaje Comunitario arranges the disposal of the community’s waste. The organic waste from residents, shops and restaurants in the local area is combined with that generated by Huerto Roma Verde. “Our biological treatment plant and composting systems can break down up to eleven tons of organic waste every month”, comments Ayala. The end product is used not only in the raised beds, but also in the neighbourhood’s gardens and parks. Solid waste is dropped off at collection points so that the materials can be converted or given a new life. At Huerto Roma Verde one can find for example structures made of drink cartons, compressed plastic bottles, and recycled aluminium or glass.


Huerto Roma Verde also makes a stand when it comes to energy supply: “It is our view that true freedom and independence can only be achieved through self-government”, explains Ayala. 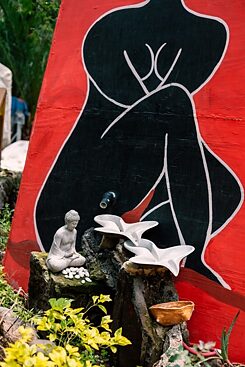 Huerto Roma Verde is home to Mexico City’s first “Red Point” (Punto Rojo). This is a safe and protected space for women who use ecological methods for their monthly period. The menstruation blood they provide here is used to fertilize the medicinal herbs. | Photo: © Irving Cabello

“We must break for example with this hierarchical, centralized, vertical and patriarchal paradigm by not purchasing any gas from companies. This also applies to the major food supply chains. We are entirely independent of any centralized system. If we create individuals and societies that provide for themselves, we will bring about a shift in the power structures.” Because it collects rainwater, uses renewable energies and produces its own biogas, Huerto Roma Verde is almost completely self-sufficient, making it an island of sustainability in the midst of this chaotic metropolis.

Though this is just a stand-alone initiative for now, similar projects are already being established at other places in the city and the country. What is more, Ayala is in constant contact with people from around the world who are keen to reproduce his idea in their countries. Garden projects of this kind can be set up anywhere, he asserts, adding that all one has to do is base them on the individual needs of the places and their inhabitants.