Erosion, flooding, drought: ever more extreme weather events are making life difficult for conventional farmers. How can we produce food in a more environmentally compatible manner? One possible solution is currently being trialled in the Netherlands.

One hot and humid afternoon in July, Christine Ornetsmüller is sitting in a field and pulling out weeds. She is surrounded by tall shrubs and potatoes, with the occasional red poppy shining through the greenery. Though this may look like an idyllic scene on a farm, it is actually taking place in the heart of the small Dutch town of Almere. Ornetsmüller is one of the 18 volunteers who are helping on this Friday to set up the Weerwoud Foundation’s “Agroforestry Experience” that will form part of the Floriade international garden show in April 2022.

“I realized that it is very difficult to do anything about climate change in a city”, says Ornetsmüller, who is originally from Austria. These days she lives in Amsterdam, which is 30 km away, and for the past two years has been coming to support the Weerwoud Foundation team every Friday. 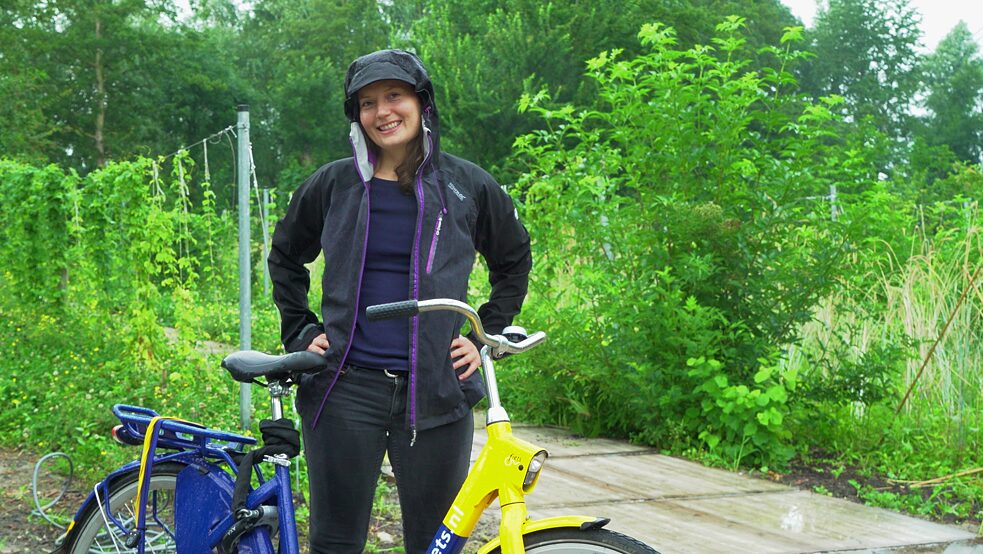 Christine lives in Amsterdam and for two years has been coming to Utopia every Friday to help with growing crops. | Photo: © Springroll Media

What Is Special about Agroforestry

In the spring of 2019, trained architect and agroforestry expert Xaver San Giorgi and his Weerwoud Foundation began creating an island in the centre of Almere. Their goal is to show how entrepreneurs and farmers could use agroforestry in future to help restore ecosystems. Which is why the island has been named Utopia.

“Utopia is a place where I showcase one way in which we can restore ecosystems while at the same time growing food for everyday consumption”, explains San Giorgi.

But what is agroforestry, and why do ecosystems need to be restored in the Netherlands? 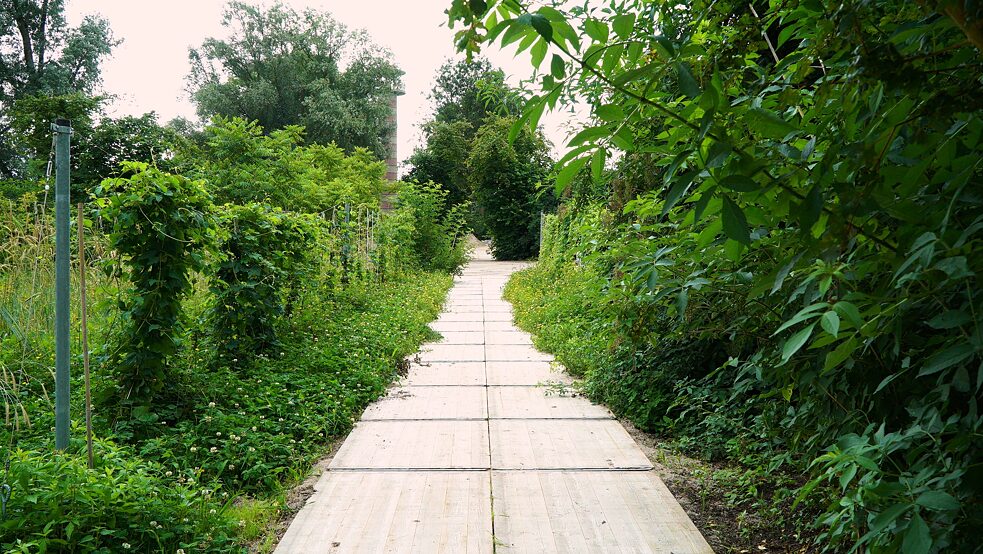 Utopia is an island in Almere that is reached via this path. | © Springroll Media Following the Second World War, when memories of the famine of 1944/45 were still raw, an unprecedented agricultural shift took place all over the world – the Green Revolution. During the course of the years, land reclamation, mechanization and technological innovation gave rise to an agricultural sector capable of feeding millions of people worldwide.

“However, the way we farm today disrupts the natural processes of our ecosystems. For example, because there are fewer trees, heavy rainfall causes considerable erosion”, explains San Giorgi.

In agroforestry, on the other hand, trees are an integral part of the agricultural system. Crops like potatoes, onions or grass to be fed to livestock are grown in between the rows of trees. Not only do the trees bear fruit themselves; during extreme weather events such as periods of drought they also provide shade and protection for the vegetables growing beneath. 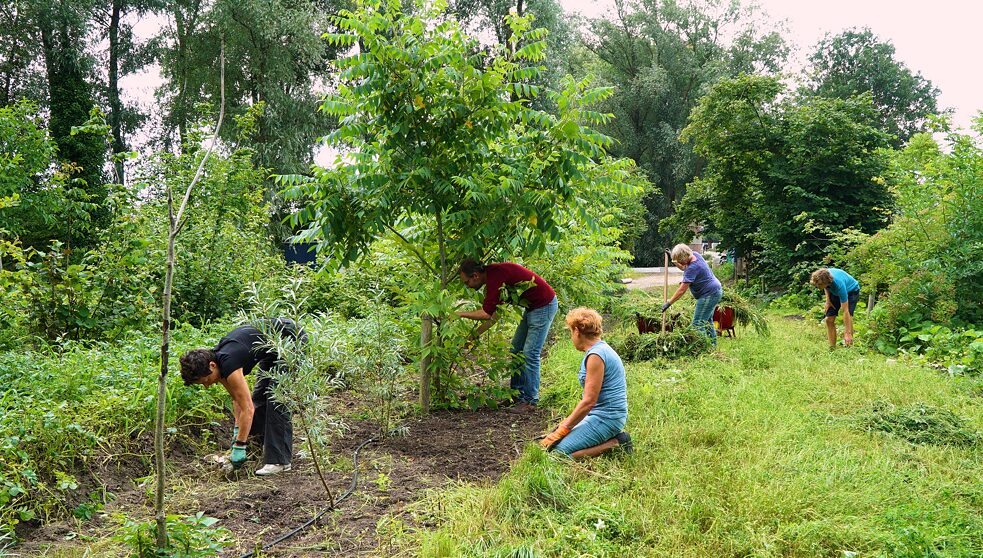 Xavier San Giorgi helpt een handje mee, maar zonder de vrijwilliXavier San Giorgi lends a hand, but without the volunteers the work could not be done | © Springroll Media In cooperation with industry and science, San Giorgi and his team now want to help farmers set up agroforestry systems with a view to restoring biodiversity, improving soil quality and creating more beautiful landscapes for humans and animals.

So far, they have established eight strips of land that are surrounded by various types of trees and shrubs. They have already achieved success with growing potatoes, for instance. Despite the damp summer, the potatoes did not fall victim to the dreaded Phytophthora pathogens that cause late blight. San Giorgi sees this as a sign that the biodiversity resulting from the combination of different ecological systems could be more resistant to pest infestation.

The increasingly frequent heavy rainfall that is a cause for concern for many Dutch farmers also appears to have little impact on the agroforestry system on the island of Utopia. “We have many perennial plants and rows of trees that act as a kind of buffer zone for the water and prevent erosion”, says San Giorgi. 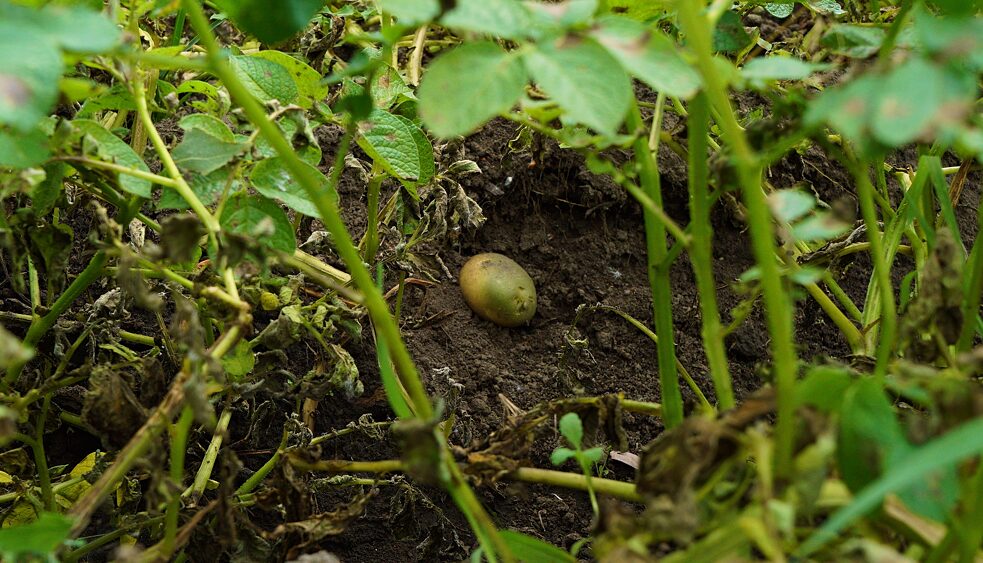 Despite the damp summer, the potato crop is in good shape – Xaver attributes this to the biodiversity made possible by the agroforestry approach. | © Springroll Media For San Giorgi and his team, Utopia is as it were a laboratory in which they can plant different combinations of crops on their fields in the open air and under real-life weather conditions. They document the various developments and hope that their successes in the future will be enough to convince even large-scale farmers of the benefits offered by agroforestry.

Although agroforestry has many advantages and has actually been shown by studies to achieve higher production per acreage than a monocultural approach, the Weerwoud Foundation and a number of other organizations in the Netherlands are still pioneers in this area.

The Dutch Ministry of Agriculture, Nature and Food Quality has some ambitious goals, however.

According to the national “Agroforestry Master Plan”, at least 25,000 hectares of agroforestry are to be created in the Netherlands by the year 2030. There is still a long way to go before this is achieved, however. It is difficult for farmers to fundamentally change their systems, which is why San Giorgi and his team organize workshops for those interested in agroforestry Though farmers are often enthusiastic about the biodiversity they see on the island of Utopia, they also have many questions, especially about the feasibility and funding of the approach.

“What we are facing here is a generational question. If you plant trees, you won’t achieve (financial) success as quickly as if you farm on an annual basis”, San Giorgi explains. He believes the government’s target is ambitious, above all because there are still many bureaucratic hurdles facing farmers.

“Here in the Netherlands we are used to our agriculture achieving a very high level of cost effectiveness. It is difficult to match that”, continues San Giorgi, “whereas other countries with lower agricultural productivity levels will certainly see more rapid success. There is a great deal of potential.”

Will we therefore have to do without the economic successes for a time in order to restore our ecosystems?

San Giorgi sees this first and foremost as being a cultural issue: “From a technological viewpoint, we already have everything we need to restore ecosystems. However, we also need to restore the relationship between humans and nature”. 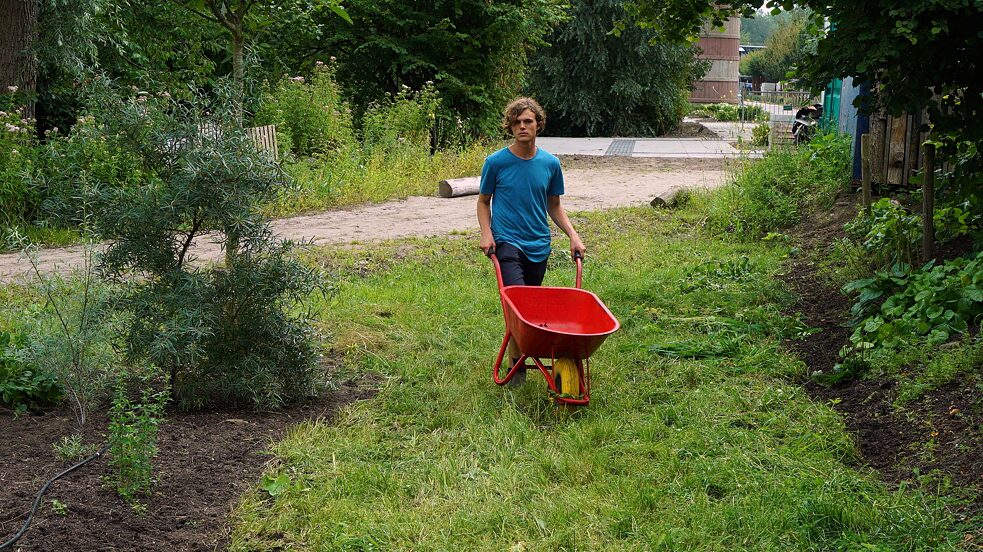 San Giorgi believes the success of agroforestry is a generational question. | © Springroll Media This is also one reason why many of the volunteers spend every Friday working in the fields of the Weerwoud Foundation. Besides enjoying the physical work, they like the pragmatic approach, acquiring knowledge about native plants, and in particular the sense of community.

When at the end of a long work day San Giorgi looks around and still spots volunteers picking weeds from between the shrubs, he is reminded of why he still loves what he does: “Most people think we can only satisfy our needs by taking something away from nature; however, if we view ourselves as part of nature, we can automatically become a regenerative force”.

Annabella Stieren is a journalist at Springroll Media in the Netherlands.