Many activists in particular are not satisfied with the results of COP 26. During the summit, there were daily protests in Glasgow, like this one right in front of the entrance to the event site. | Photo (detail): Andrew Milligan © picture alliance|empics

Every year, representatives of governments, media and non-governmental organisations meet to discuss climate change. 2021 there were a lot of expectations for the World Climate Summit. Could they be satisfied? Activists Annika from Germany and Arshak from Russia share their thoughts.

Annika: For me, it’s kind of frustrating to see that many people are saying it’s not as bad as it could have been. We should measure the success by what has been accomplished since the Paris agreement and by whether the 1.5-degree limit is going to be fulfilled. There are good things happening, new approaches and agreements. Nonetheless, it doesn’t look like they are able to really uphold the 1.5 degree Celsius target. From my point of view, the conference has shown that real protection of the climate has to start from a local rather than a global level because otherwise, nothing is going to change.

Arshak: I didn't come here with much hope to begin with. When you are protesting in Russia you are risking a lot. I don’t really focus on the future, it’s enough just handling the present. The climate conference could be an instrument to tell the truth about what is happening in Russia right now, but the connection between the human rights crisis in Russia and the climate crisis is not really made. The Russian government is making a lot of promises about the future. But how can we make sure that they are being kept when we cannot protest, because they are arresting people and declaring them, and independent media, as foreign agents. Almost all climate activists are afraid to protest now. I myself was arrested two years ago, after the Conference of the Parties (COP) 25, still I had hopes that we could build a movement in Russia similar to the one in Europe. Yet today, people are afraid to protest because the situation is worse. When I was arrested after the last COP, a lot of activists all around the world were striking to support me and I felt the power that we can change the situation if we unite. It’s nice to meet some of them, therefore it’s not that big of a disappointment for me.

Arshak, can you tell us a bit more about the situation in Russia and how it is for activists?

Arshak: Well, I'm talking with the media a lot, as I think of myself as a free person and it’s a basic human right to do so. Though when I started protesting in March 2019, I was fearful. Two years ago, I was afraid of being arrested or of being beaten. One year ago, I was afraid of searches and stuff like that. Now, I do not feel any fear. I'm used to the feeling that something bad can happen, but I'm okay with that because I believe that we are fighting for something bigger. It is important to do whatever we can to save what we have. But it's difficult, and it's taking a lot of time to fight this fear. And the prosecution of activists is not even the worst thing – worse is not having any support in your own country. Most of the activists in Russia don’t feel like the people on the streets would support them, so many are doing online strikes. I personally feel better when I'm striking than when I'm sitting at home. I feel good at strikes because I feel that I'm doing something, the right thing. I'm stronger than fear.

Greta Thunberg and others have called COP 26 the most exclusive climate summit ever, without real participation of marginalised groups. What are your thoughts on this?

Annika: I think it is really exclusive. I myself don't suffer from that, because I'm very privileged: I'm from Germany, I have the right Covid vaccine to enter the UK, I don't have to get a visa, I can even afford to come here by train. I don’t have the same struggles others have. Also, what excluded many people was the limited number of badges. Many young people who haven’t worked in nongovernmental organisations (NGOs) for many years couldn't get in. The plenaries and press conferences were limited as well, very few observers from NGOs could take part, least of all young people.

Arshak: I wasn't sure that I would be able to come here myself, because of my vaccine. I was invited to another conference in Scotland in October, and I couldn't enter the country because of my Russian vaccine. One of the problems on top of that was that we could rarely do protests. At the COP 25, we were protesting a lot and we felt our voices being heard. The COP should be about dialogue between governments, NGOs, and civil society. And there was no dialogue. We are just trying to make our voices heard. A few young activists made speeches, but there was no place for young people from Russia. In fact, I think I was the only person from Russian civil society, as the government is declaring people to be foreign agents for talking to international media. Of course we need dialogue on the international level, we need Russian young people in this dialogue, and we need platforms that are talking about the problems we are facing. The official Russian delegation here is promoting gas and fossil fuels. I think we need more independent voices from Russia being heard at conferences like this. 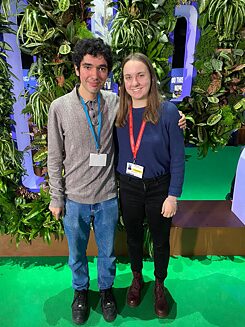 Arshak and Annika would like the civil society and activists to be more involved and heard in decision making processes at the climate summits. | © Natascha Holstein In the last years, Fridays for Future itself had some criticism concerning the diversity of its structures. Would you say something has changed?

Annika: I think it's normal that problematic structures evolve when a movement gets so big in such a short time. But I think that we are constantly working on our structures, we are constantly reflecting, constantly trying to get better, and constantly trying to make this movement a safer space for everyone. What people are also forgetting is that when we started protesting, many of us were still in school. We were all so young and needed to learn much ourselves. The movement is a part of society and as such it is no wonder that we have the same problems that society does, though we really try to reflect on and change that.

Ashak: In Russia we do not have the same problems as in Europe, but of course we are trying to reflect and change our strategy as well. We were trying to connect a lot of different local issues to the climate, to describe this complex issue. Before, there was no climate movement in Russia. In Western Europe there has been a climate movement for decades. In Russia, a lot of educational work is needed, because people don't understand the urgency of the climate issue. We are trying to learn from the movements in Europe and other countries. For example, when they are doing something about Indigenous people, we ask ourselves: how can we include the Indigenous peoples in Russia?

Do you have any hopes that anything good will come out of this climate change conference?

Annika: Before I came here, I didn't think that this is going to be the climate conference that is going to save the world and keep the 1.5 degree limit. That's just how it is. Though I still have hope that some good will come out of this conference, even if it's just from bilateral dialogues or some agreements in particular cases. It will certainly not be enough. The goal is keeping the Paris Agreement, it is capping global warming at 1.5 degrees. And if that's not the result, then this COP wasn’t successful.

Arshak: I think people need hope. If you say that this COP is a disaster, it will be quite frustrating and there are lots of frustrating things happening in the world right now. But I feel the hope, it's inside us, we had about 100.000 people on the streets in Glasgow. I feel the hope, because after COP 25 I saw a lot of activism from all around the world for the first time. No matter what comes out of this, a lot of activists are continuing to protest. We are almost becoming professional activists, though this work should be done by governments.

Aside from all the frustration that comes with being an activist, why is it still so important to be at these conferences and what would you say were the achievements of the movement?

Annika: It's important for us to be here because we deserve to be here. These conferences are meant as a space for politicians and civil society to communicate. We are part of civil society and it's important that the youth, who is actually going to suffer the most from the consequences, is being heard. In Germany, we have achieved quite a lot already: at first no one was really talking about the climate, it wasn’t seen as a really pressing issue. And now we even successfully sued the German government for its climate inaction.

Arshak: The world is changing because of the global strikes for climate and we have achieved a lot in Russia as well, particularly on the local level. Independent media is now writing about the climate crisis because of the natural disasters in Russia. We have started to talk about the climate crisis, we have started to tell the truth about the connection between forest fires and the global warming, we were doing a lot of educational work. And that’s when we opened the discussion to other aspects as well, like the energy transition. Four years ago, our government was joking about the climate crisis. Now, they acknowledge the crisis, even at a higher level. We have achieved a lot already, but we need to continue, especially in Russia. We need to organise big protests like in Europe, because without activism and protest there won't be any changes on the scale needed.

The interview was conducted by Natascha Holstein, online editor of the Zeitgeister magazine.