A fisherwoman in Makassar. Women in coastal areas are particularly vulnerable to the effects of climate change. | Photo (detail): © Solidaritas Perempuan Anging Mammiri

What makes a just transition – and what does that have to do with gender? In the interview, Dinda Yura explains why sustainable economics cannot be achieved without the involvement of workers.

When talking about the climate crisis, the economy is a big factor. A lot of transitions are needed to get a more sustainable economy and livelihood for the people. So, with talking about a “just transition” we focus especially on the people who are concerned about what will happen to their labour, for example, the ones from the energy sector, coal or palm oil workers. It is important to make sure that within this needed transition, there should be no harm done to these workers. This perspective is actually based on the awareness that the current economic and political system is the one causing the climate crisis as well as the exploitation of workers. So, that’s why the just transition is not only about transforming the energy sector but also the whole system. That’s the whole idea and then there are some specific concepts like universal basic income and social security and the like to make sure the universal human rights are preserved.

You talk a lot about the special consequences for women in the economic transition process. In what way is that related to specific gender dimensions?

We know that the climate crisis isn’t happening in a vacuum. We already have social inequalities, like gender injustices. So it’s only natural, that it has an impact on gender dynamics as well. The asymmetric economic system that is causing the climate crisis is also causing exploitations to women. We already know that women face a multi-layered impact, for example, they are often the ones that are expected to take care of the family because of the gender role definitions. The multi-layered impact is visible for example in the labour sector, where we face wage discrimination and the fact that social security is often only guaranteed for men, in particular in the global south.

Why is it so difficult for women to be accepted as workers and receive social security services?

To give you a perspective, in my country, Indonesia, more than 60 percent of women are working in the informal sector. And that’s only the number that is documented by our government, there are definitely more. They are traditional farmers, peasants and also fishers, who are not being recognized. In their identity cards, they are registered as housewives. We have worked with many female fishers wanting to make their fisher's cards because it will give them access to insurance and subsidy. But it’s really difficult for them because the local governments insist that they are housewives and are only helping the husband.

And then there are also the small sellers, the domestic workers that are never recognized as workers in many countries. So, social security is important. Labour rights guard is important. Universal basic income is important. But it's not enough, because even if we are able to influence the policies and we can provide all of those things, it might still not be enough because there are many women that are not reached by the labour laws. It’s also in the heads of the people. So when we are talking about the just transitions that address the women's situations it also needs to address the general inequality. It needs to dismantle the power relations between genders, including dismantling the traditional gender roles. 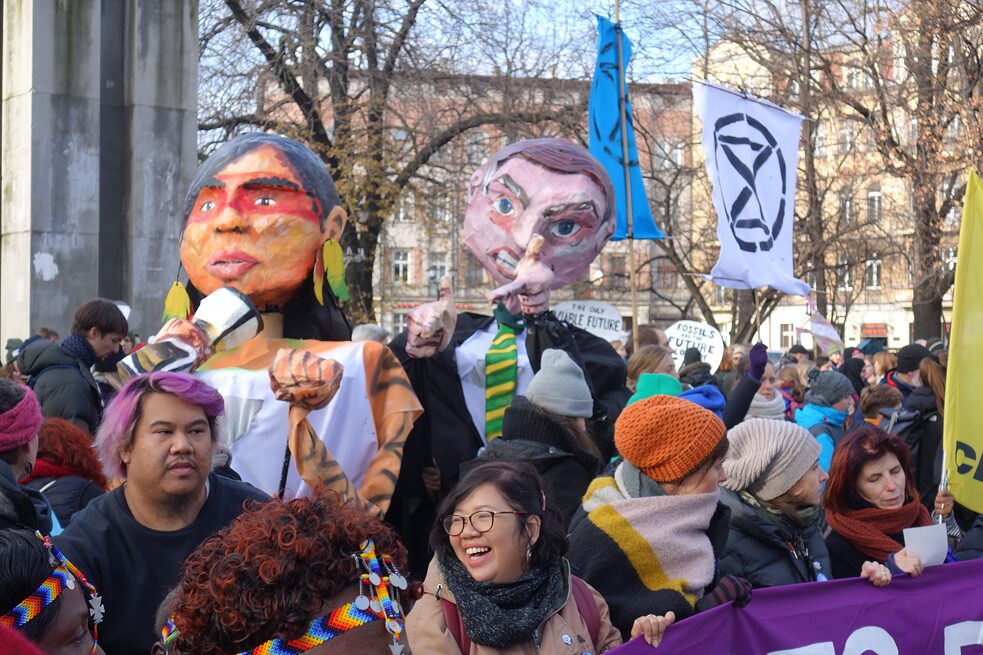 Together with many other activists, Dinda Yura regularly campaigns for climate justice. She is especially enthusiastic about international events and conferences such as the COP. | Photo (detail): © Danny Moore How can these power relations be dismantled?

It has to start from within the communities. We need to include the communities’ ideas and initiatives because in many local communities it’s often the case that women play bigger roles, they have the knowledge, take care and are an important pillar of society. In the economic or political sense, however, they are considered as second or even third level citizens. On the other hand, we also know that in some cultures the patriarchy is rooted deeply. Women’s contribution is not acknowledged, because they are doing the reproductive work, they are taking care of the family, they are providing food and most of the time work in the informal sector, all of this is not contributing to the national income. So this patriarchal society says, the really important role is to earn the money. So in a lot of these communities, we need to change that materialistic perspective first to support the role of women in society.

So, what needs to be done to achieve this just transition?

I think there isn’t one single formula. Because the situation in different countries is very complex. Where I come from, central Java, there was resistance from the communities against a cement factory. The government said, they would provide jobs which are supposed to be needed in this region. Well, the reality is, the citizens there, most of the people from the communities don’t have a fixed monthly income, but they are fine. They teach their children by themselves, they have their field, they eat what they plant and they have their cattle. But as the people earn very little, the government is able to push the factory in order to “help” the people. What is not considered is that it actually destroys the environment and the livelihood, as well as the cultural and even spiritual values of the people. I think the shift has to be bottom-up. Each community needs to have its own authority to determine what kind of transition is needed in their area. It’s the most basic thing and will certainly not be enough, but it’s a good starting point and could influence other policies.

What are your thoughts on the involvement of the international community and the people in power?

At the international stage, there are a lot of promises made and much money is supposed to be attributed to fighting climate change. But we don’t really talk about how this money is being allocated. There are also a lot of companies and private investors in the game, because they see the profit potential, especially in the energy sector. For example, in Indonesia, we have a lot of geothermal projects being planned and implemented and also, we see that a lot of these projects are funded by the World Bank or even by private companies. These big-scale energy power plants, geothermal or hydro, are then claimed as cleaner energy. It’s eventually about profit, but it's also claimed as a climate solution. No one sees the havoc impact it might have on the communities. For instance, they are building a hydropower plant in a river in Poso, Sulawesi. That has implications for the water of the community. There will be repercussions to their agriculture, their cattle, and the fish. They eat from the river and there are some fish species that only exist there, two already extinct because of the project. It also expands to the lake and there is a bridge that has spiritual values because it is a symbol of unity for the community. This bridge might be demolished. So, I think, as long as climate solutions are not worked through with the people on the ground and are really going to the roots of the problem, it won’t be a benefit for the people, it’s the loss of livelihood of the people.

A hydropower plant is being build in the river Poso, which is supposed to destroy the livelihood of the people and causing floods in farms and might eliminate fish species. | Photo: © Solidaritas Perempuan Poso Do you have hope that this might change?

My hope is, that through conferences and speeches, people who don't know about the negative impact of climate false solutions such as the so-called forest conservation measures or the “clean” energy sector will change their perspective. That's why we need to tell our stories and I believe that humanity itself will support the ones who need to be supported.


The interview was conducted by Natascha Holstein, online editor of Zeitgeister magazine.