Triple Disaster in Japan About Healing, Telling Stories and Carrying on Living

The coastal region in the north-east of Japan is hit by strong tsunamis about every 40 years – most recently in March 2011. How do people manage their lives in harmony with nature despite the conditions, how do they pass on their culture to the next generations? 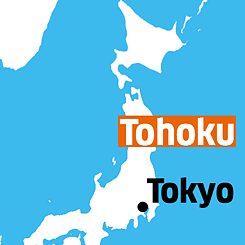 © Goethe-Institut Tokyo The most powerful earthquake to be registered since records began hit Japan on 11 March 2011, causing more than 15,000 deaths. Over 2,500 people are missing to this day. For the coastal region of northeast Japan, however, this kind of disaster is by no means a one-off event: the region is struck by severe earthquakes and tsunamis roughly every 40 years.

How do artists, activists and curators engage with such circumstances? What does it mean to them to build a new life in the affected region? We interviewed three people who have their own particular ways of dealing with the situation.

Carry on living here or move somewhere else? This is a question that divided entire towns following the devastating tsunami. Traditions that had been handed down from one generation to the next simply vanished. Michiari Saito‘s “Tohoku Treehouse Project” is an attempt to reverse this trend. People join forces to build their treehouses, which gives them an opportunity to revive their community with their own hands.

Fumiaki Aono lives in Sendai, the largest city in the northeast of Japan. He combines discarded objects he finds on the street to create his artworks, thereby giving a new life to things that would otherwise be seen as rubbish. Aono is not interested only in everyday items, however. For 30 years, his concept of naosu – meaning to heal or repair – has been his way of questioning a society that immediately throws away the old and then makes something new – at the expense of our limited natural resources. He takes a critical view of the reconstruction process following the triple disaster: is it not high time that we found a more sustainable approach to nature?

What can and should a museum do for people? Hiroyasu Yamauchi is the curator and director of the “Rias Arc Museum of Art”. Following the triple disaster in 2011, he radically redesigned his art museum in Kesennuma and opened a new permanent exhibition about the devastation. “Damaged“ objects are exhibited there, telling the story of their own fate and serving as a warning for future generations. For Yamauchi, it is about a collective memory that must be passed on over decades. “Why is it so important to us to keep telling these stories? Because, quite simply, it is a matter of life and death.”