Who can access the international markets and how could they be made more socially and economically sustainable? Canaan Palestine Fair Trade wants to uproot the market – with olive oil.

In the Palestinian territories, olive oil is as basic as water. The farmers rely on olive trees to support their families financially, hence, other crops and trees are planted rarely. For example, a one litre bottle of olive oil costs 40 to 60 Shekel (that is approximately 11-16 Euro) for consumers, whereas a farmer only gets about one Euro for a kilo of cucumber or tomato. Not only is olive oil economically more viable, but it is found in almost every dish in Palestinian cuisine. Moreover, when farmers have more olive oil than they need, they sell it, especially to neighbours and friends, for a decent price according to its quality. 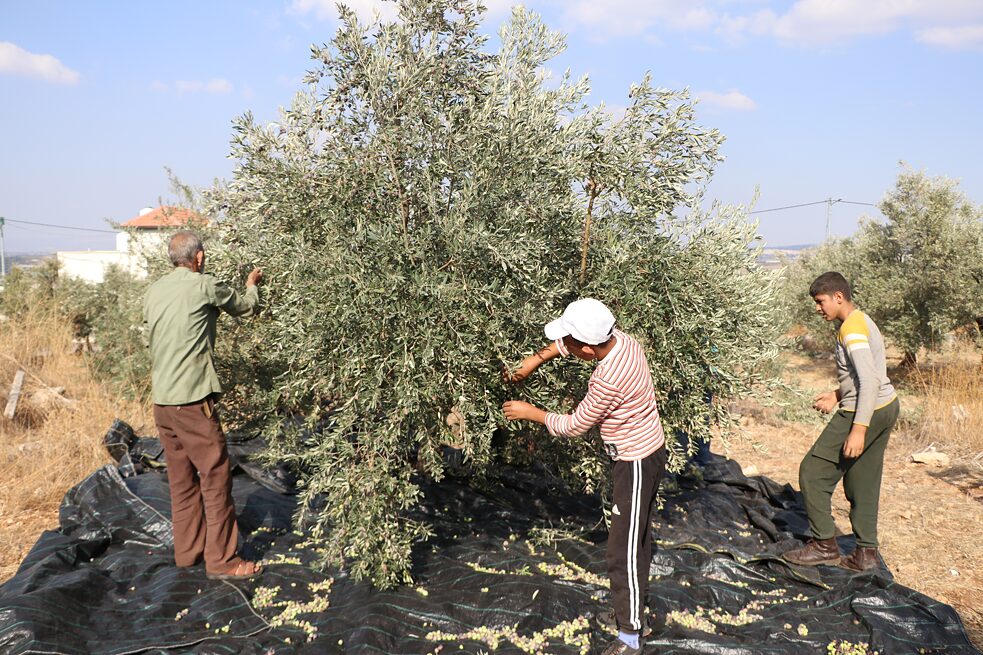 Very often, olive tree harvesting is a family business and especially the sons and grandsons are helping the providers. | Photo: © Mohammad Zawahreh

From the Palestinian Territories to the World

Throughout the years, its buyers were locals only, who do not own olive yards themselves. However, nowadays word spreads about the quality of Palestinian olive oil and therefore an international market is emerging, especially in the USA. A development greatly brought about by Canaan Palestine Fair Trade.

Canaan Fair Trade is a well-known project in the Palestinian territories that produces bottled olive oil with the harvest that is brought in by the farmers they collaborate with. Canaan Palestine Fair Trade, located in Jenin city, is interested in two aspects: Firstly, that Palestinian farmers can truly benefit from their olive tree yards and secondly that the symbolic importance of the olive trees is acknowledged. “Olive oil is the most distributed source of income, and it’s always found in Palestinian kitchens. It symbolizes Palestinian identity; olive trees are up to 2000 or 3000 years old”, says Dr Naser Abu Farha, the founder and director of Canaan Palestine Fair Trade. The symbolic meaning of olive oil is not exclusively rooted in Palestinian cuisine, but has to do with the tree, as well, and the strength it embodies. To simplify, Palestinian tradition says that Palestinians will stay in their occupied lands as long as olive trees do too, referring to its ability to face and challenge difficult circumstances. 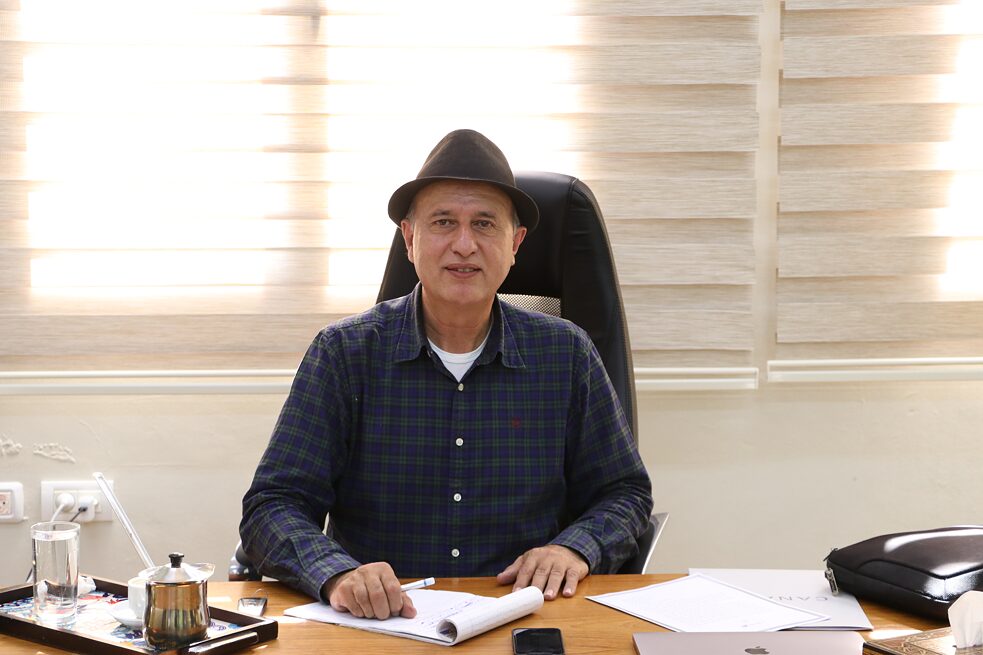 Dr Naser Abu Farha, owner of Canaan fair trade, an anthropologist, and an entrepreneur | Photo: © Mohammed Zawahreh Besides those factors, Canaan makes an effort to export Palestinian olive oil to the world through an eco-friendly system. Canaan’s business is based on buying olives and exporting its oil, planting different crops for reviving the soil health, and selling these crops to locals on a regular basis.

Canaan’s idea is based on taking the maximum benefit from the yield. Diversifying the crops allows the soil to become healthier, reducing vermin infestation and diseases. “Increasing the level of nitrogen and carbon, the percentage of its moisture, and having multiple crops instead of counting on olive trees only, allows having more protection for farmers when facing climate change that affects crops and harvests negatively”, Abu Farha clarifies. He adds: “the diversification of crops helps the soil, the biggest store of carbon on earth, become more fertilized and gives other sources of food”. Plants take in carbon dioxide and turn it into energy. When plants die, carbon dioxide is emitted in the process of decomposition of the plant. This process becomes more efficient when there is a diversity of crops and trees.

Therefore, Canaan’s products are carbon negative. “Instead of having soil emitting carbon, it absorbs this element”. Canaan Fair Trade is sequestering an average of 13 kilograms of carbon for every kilogram of olive oil they export. “This shows responsible ecology and makes economies stronger”, Abu Farha continues.

As the resources on our planet are limited and shouldn’t be wasted, Canaan wants to make the most of the land in order to develop an efficient and sustainable system. 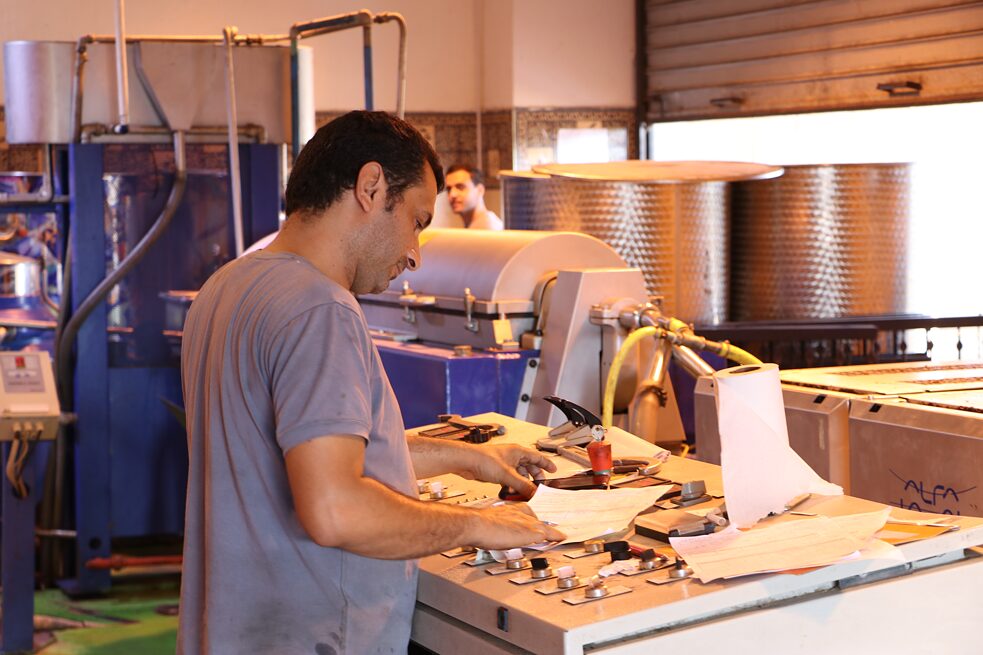 An employee of Canaan working at the press which processes olives into olive oil. | Photo: © Mohammed Zawahreh Canaan’s project comes with other projects in the Palestinian territories that aim to develop an economy based on agriculture and diversification instead of monoculture. The company already entered global industry by turning agriculture to agribusiness.

Dr Naser Abu Farha, 57 years old and a social entrepreneur and anthropologist, started this project after he came back from the USA, where he had previously lived and studied. In 2004, the selling and purchasing prices of olives were so low that farmers couldn’t live from their harvest. The money they mad from selling olives for them to be processed further into olive oil, did not compensate their hard work and effort. An additional challenge for many Palestinians is that they live under occupation, so they can’t really benefit from, control, and access all their land.

After noticing this development, Abu Farha established Canaan and started supporting the farmers by buying their olives in the fall, the annual time of olive harvest, for a price that guarantees profit for them. During its more than 15 years, Canaan established connections with 2500 artisan family farms in 54 different villages in the Palestinian territories.

After categorizing and pressing the olives in Burqeen, a village near the city of Jenin, they goes through a manufacturing process that turns them into pure organic olive oil. After manufacturing,  it is exported to the USA and several European countries. However, if farmers do not want to sell their olives to Canaan, they can sell their oil on their own after pressing it at Canaan’s free and available press. 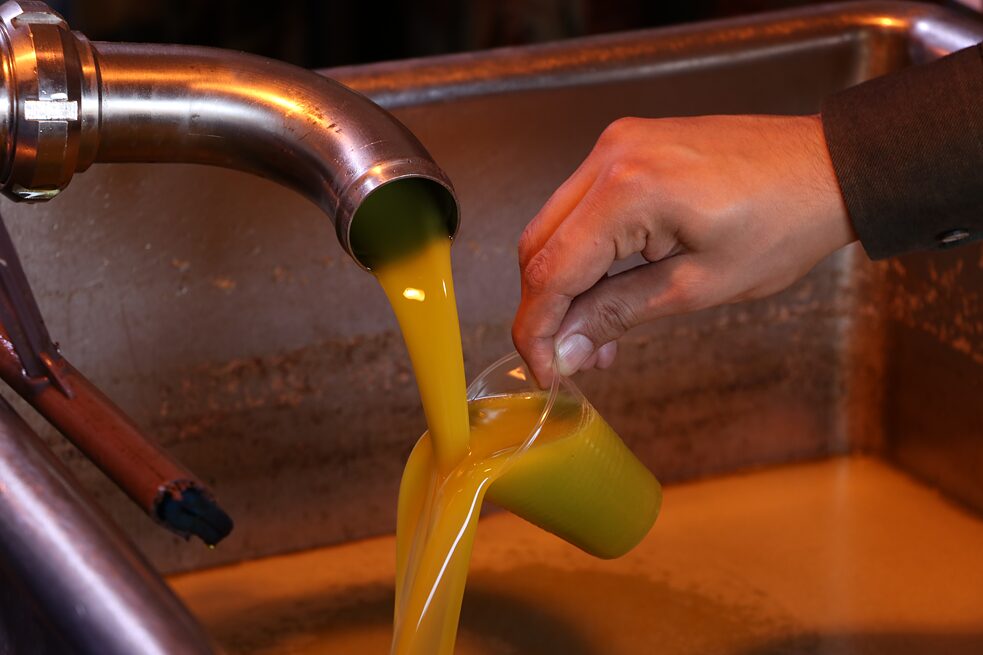 How Canaan Changed the Local Market

Abu Farha relies on quality. Even if the olive trees only produce 50 percent of the yield, revenue is guaranteed. Dr Abu Farha clarifies that a higher price doesn’t mean a bad deal for customers, given the good quality. Canaan exports 12 million Dollars’ worth of products to the USA. All this is due to the quality of the oil guaranteed by the large number of farmers, who value special care in their farming. The prices are meant to empower marginalised communities in Palestinian territories, such as underpaid farmers. He points out that the companies Canaan cooperates with, respect this principle.

Delving deeper, in 2004 a farmer sold a kilogram of olives for eight shekels (about 2,20 Euro today); Canaan almost doubled the price and paid them 16 shekels. The increase in the price means a better income for the farmers, which empowers them and their family members. Currently, the price is around 27 (about 8 Euros) shekels per kilo.


Working Together with the Farmers

Canaan helped farmers to build connections locally and internationally. In the beginning of the 2000s, generally people in the villages were less interested in relying on olives as a source of income, because of the low compensation. Therefore, many family members didn’t help out much in the harvest time. Traditionally, however, during the olive harvest, family members would come together and spend whole days collecting the olives. Canaan’s investment in the olive market and the resulting rise in the wages of the farmers helped to increase the social interest in the olive harvest within families in the region. Additionally, Canaan built bridges between farmers and companies outside the Palestinian territories, something that was not considered possible when talking about olive oil in the first place. For most of the time, olives were picked, pressed into oil, and used by the families as a common staple in the kitchens. However, with Canaan, they could be sold to international companies, a step that made the market much more accessible for Palestinian farmers. Abu Farha emphasizes that the cooperating farmers are not working for Canaan, but with Canaan.

How Do We Get Away from Fossil Fuels?

About 90 percent of all greenhouse gas emissions are due to the burning of fossil fuels. Since industrialisation, the use of fossil energy has enabled continuous economic growth in the so-called Global North - which has thus mainly caused climate change. However, it is mainly countries from the so-called Global South that are affected by the consequences. In the meantime, in the case of 85 percent of the national markets, wind and sun are the least expensive forms of power generation when it comes to building new power plants. Yet, the global energy situation as a whole is still not very renewable. In 2019, according to the International Energy Agency, fossil fuels still account for four-fifths of primary energy consumption worldwide. There is a clear urgency for change. In our three reports on the topic of "Fossil Energy", the authors take a look at three approaches to the energy transition and ask the question of how we can change our ways of doing business.

Aseel Duzdar is a journalist from the Palestinian Territories.