Where is the (de)colonial film material? What do modes of preservation and access reveal about global structures and what needs to change? An interactive map of (de)colonial archives, which requires collective collaboration to become a tool for international networking and educational purposes.


“Out of thirty-eight minutes of archive footage in my film, only one minute is actually from an Angolan archive. Everything else came from Portugal, England, the United States, Belgium, Romania, France.” (Fradique, filmmaker)

The Colonial Past and Present of Film

Film is a witness and perpetrator of colonialism. Colonial powers made films in the colonies to present populations in Europe and the worldwide public with prefabricated images – of the people, life and the economy of countries under colonial rule and, later, of their movements for and wars of independence. In turn, films were shown in the colonies with a view to indoctrinating the exploited population. Film abused. Film deceived. Film historian Lee Grieveson, who has extensively researched these interconnections in the case of the British Empire – who has written and edited publications on them –, finds “fantasies and realities of colonial rule” in those films. The cinema not only captured colonialism, but also took part in it: “the specific work of film to supplement colonial governance”. The film material that still exists today is evidence of colonial injustice and a potential source for critical societal reflections.

Much of this footage is not to be found in the countries against whom these injustices were committed, the countries that want to commemorate them and access images of their ancestors. Instead, this material is kept in archives of the former colonial powers. Artists like Angolan filmmaker Fradique have to travel all the way to Europe to view the films and may have to pay substantial fees for permission to publicly release even parts of them. At the same time, in some former colonies, archival film materials are facing decay and oblivion. The reasons for this as well as their histories are manifold: sometimes of a political, sometimes of a financial nature. Colonialism is still deeply and undeniably entrenched in the global structure of film archives – geographically, economically and ideologically: for instance, when Fradique searched in 2014 and 2015 the archives of the public Portuguese television station RTP for material on Angolan “freedom fighters”, none seemed to exist. He found the respective footage under the keyword “terrorists” – proof of how archives of colonial films partly still abide by colonial patterns of thought.

The Goethe-Institut is the cultural institute of a country that once plundered and oppressed colonies itself. It cannot presume to seek to change the filmic infrastructure for filmmakers like Fradique and their respective countries. But it can listen to their voices, relay them and self-critically support their indictment.

In September 2019, the Goethe-Institut Portugal held a polyphonic workshop with members of the international cultural scene, ranging from Fradique to filmmakers Inadelso Cossa from Mozambique and Tamer El Said from Egypt to Portuguese artist Filipa César and Ghanaian art researcher Yaa Addae Nantwi. They voiced criticisms, debated and made connections that would extend beyond the workshop. The participants have formalized their demands in an official “call for action and reflection on decolonising film archives”. They also called for a permanent means of networking and mutual orientation. People must have possibilities for exchange. The accessibility of material must improve.

On this basis, the map at the core of this article came into being. It is collaborative, open-ended and yet usable at any time. The workshop participants and their networks broke the first ground: the map records a series of places, initiatives and people who are holding (de)colonial film material, working with it or creating “counter-material”. The definition of “(de)colonial film” itself should be the subject of continuous debate. The term includes – but is not confined to – films made by state institutions, companies and citizens of colonial powers during colonial occupation and the struggles for independence. The definition also refers to material produced by freedom fighters and to films that investigate the colonial past or establish a new oral history tradition. Beyond films themselves, production notes, photographs and other historical documents make a crucial contribution to understanding (de)colonial cinema. Three groups of key players have so far crystallized when it comes to dealing with this archival material: national and public (film) archives, individual parties such as filmmakers and researchers, and independent archival initiatives.

Such initiatives have set out to create alternative or counter-archives. They salvage neglected materials, as in film critic Didi Cheeka’s project “Reclaiming History, Unveiling Memory” in Nigeria. They shoot new testimonies never recorded on film or even in history before, such as Fradique’s “Projecto Trilhos” in Angola. Other initiatives critically explore material held in Europe, advocating for open access, digitization and collaborative analysis. These goals guide, for example, the Arsenal – Institute for Film and Video Art in Berlin in its approach to the over ten thousand films in its collection. Another initiative is “Colonial Film: Moving Images of the British Empire”, an online catalogue created under the international leadership of Colin MacCabe and Lee Grieveson and represented at the Lisbon workshop by the project’s senior researcher, Tom Rice. Their database compiles films about former British colonies. A large number of them has been made available for streaming and has been examined in annotations. The project seeks to foster an engagement with colonial (film) history both in Great Britain and in its former colonies.

The map mirrors these various endeavours surrounding (de)colonial film archives which it connects: it serves as an archive itself, gathering information – an archive of (film) archives. It, too, banks on digitality as an essential step toward broader access. Just as the Arsenal promotes an open and “living” archive, this map must be an open and living one.

C as in Cartography, C as in Colonialism

The proposal of a mapping tool for decolonial networking purposes cannot do without a self-reflexive reference to the ties between colonialism and cartography. In the wake of the “Berlin Conference” (1884–85), under the aegis of German Chancellor Otto von Bismarck, imperial powers systematically divided up Africa and drew arbitrary borders. Numerous decolonial thinkers have emphasized how profoundly that conference has impacted the African continent to this day, even if they might press for different measures as a result. Wole Soyinka talks about the “colonial nation-state map imposed upon us”. Film scholar Priya Jaikumar shows how colonial film itself made use of cartographic representations: the state, educational institutions and companies coupled celluloid and drawings to produce imperialist designs for conceiving of the colonial world, for organizing and subjugating it.

Moreover, a European colonial perspective on the world is inherent in the Mercator projection, the mode of cartographic representation on which nearly all available online mapping tools, including this one, are based. While no two-dimensional map is capable of depicting geographical reality, the Mercator projection distorts in particular the relative sizes of objects on the map, making, for instance, Africa – the second-largest continent, after Asia – appear no bigger than Greenland. Digital mapping tools opt for this projection because it does accurately reflect geographic directions and shapes to a fairly high degree of detail. The distortion becomes evident when contrasted with the Gall-Peters projection (see the illustration below), which is not available on Google Maps and is therefore not responsive here. Google Maps does, however, bring together a number of features for a wide range of devices, including browser compatibility, interactive features and responsiveness on mobile devices. The map of (de)colonial film archives was therefore created using this service in order to maximize access and participation. 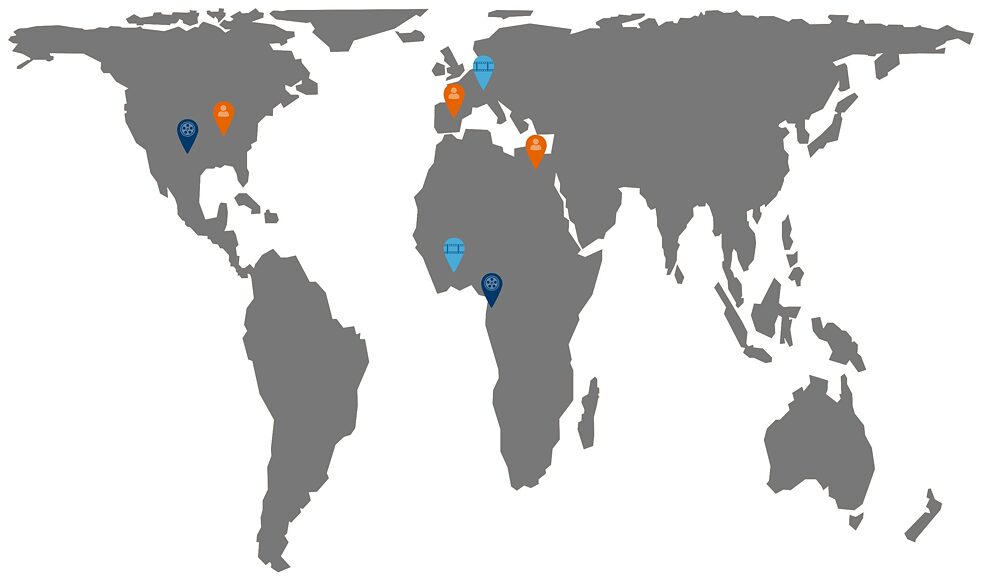 Intensive use of this map might increase the pressure on market-dominating providers of mapping tools to decolonize the cartographic worldview in the digital age – and develop alternatives for widespread use. Perhaps the map can be drawn upon to counter persistent colonial mindsets on a single visible surface by means of an abundance of pins and the powerful image they can produce. And, perhaps, you need to criticize this mode of representation. This mapping needs continuous criticism and improvement.

This map is intrinsically incomplete. The pins already in place on it at the time of publication are not based on a representative sample. Nor should they be. They reflect individual empirical reports, personal experiences. Each experience is too important to vanish from the face of the earth again. As in an analogue archive, which will acquire new materials sometimes by chance, sometimes thanks to individual initiative, this project also calls for active contributions. The map needs to grow. The map needs to change. To this end, anyone can submit information – and reports on their own experiences – on archives, initiatives and individuals (see the dedicated space below for further details). The map, like this article itself, is full of limitations – limitations which both seek to break through, but, in part, they are still uncertain how to do so; limitations for which an awareness is, perhaps, still lacking. In a word, this mapping depends on discussion and adjustments: of its specific content as well as of its framework and methods.

The more people participate and the more pins can be placed, the wider the network will be. At the time of publication, the map registers a preponderance of national and public (film) archives located in Europe, at a ratio of 18:5. If your submissions corroborate this finding, the map serves as a graphic manifestation: it illustrates a film archival asymmetry, it is a visual representation of an enduring inequality. It might thereby increase the pressure on political and cultural decision makers. If the look of the map changes over time, it will become a digital witness of transformation. If more and more films are digitized, this tool will not only map names, addresses and websites, but also lead to the filmic sources. Such access will give rise to new challenges: how to frame these contents? What additional navigation aids – an example might be the annotations to the Colonial Film Catalogue – are necessary? For the production of colonial film material always involves violence, the images themselves are and show forms of violence, and showing them remains violent. This mapping thus creates a network which you can shape – in your capacity as researchers, archivists and filmmakers, as children, grandchildren and great-grandchildren of ancestors filmed in colonial contexts. This map is also a visual archive for educational purposes – an archive that can make the status quo of (de)colonial films transparent at a glance.

Have you ever worked with an archive in this context? Do you know of or are you organizing any related projects or initiatives?

Creation of the Map: Teresa Althen and Nancy Schneider