Part 2: Germany as a Model for Confronting the Past?

The crucial point here is that the activists’ primary goal was not dismantling the statues that symbolised a memorial culture that they saw as inadequate – though they did practice this kind of “memory protest”. Much more of these activists’ time was consumed by the quiet and slow “memory work” of archival research, conducting interviews, creating exhibits, planning alternative walking tours, and more. In undertaking this work, those involved came to understand the intricate workings of Nazi rule and the local structures of power and resistance and carried this understanding into all branches of society. They demanded – usually against considerable resistance – that the sites of Nazi terror and of Jewish suffering be marked and the perpetrators be named. This was a fundamental shift from earlier monuments that had been vaguely dedicated to the “victims of violent times.” Gradually, politicians and bureaucrats recognized that there was a touristic and educational demand for more critical history and that support for local museums and memorials was in fact good policy.

With reunification of the two German states in 1990 came the need to re-invent the large concentration camp memorial sites that the East German state had instrumentalised to bolster its ideological legitimacy. Considerable sums of money were made available for official Holocaust memorial sites – including the large concentration camp sites on German soil, the Topography of Terror memorial in Berlin (among other things, the former Berlin Gestapo headquarters), and the Berlin Holocaust memorial. At all these institutions, former activists, who had dedicated their free time and energy to confronting the Nazi past, and thereby acquired essential skills, now became staff and even leaders. They brought with them the sense that remembering the Holocaust is essential to German democracy and an accomplishment that must be defended against those who argue that it is time to “move on.” As a consequence, Germany today not only has a decentralised landscape of remembrance made up of thousands of markers of the Nazi past, but this is deeply institutionalised and supported by official policy and funding. Democratic memory activism has become the memory establishment.

The civic drive to remember in Germany was of course the result of unique circumstances – the passing of the generation responsible during the 1930s and 1940s, the preparatory work done by survivors, artists and intellectuals since 1945, and the emergence of a progressive political environmental buttressed by new social movements. This situation cannot be replicated. But the Equal Justice Initiative (EJI) – the group founded by criminal justice reform advocate Bryan Stevenson, who often draws comparisons between German and US approaches to the past, has nevertheless been inspired by this civic commemoration history.

Centralized and Decentralized Memory Culture in the U.S.

The National Memorial for Peace and Justice in Montgomery, Alabama is at first glance a central site remembering the victims of lynching and racialised terror committed against Black Americans. The companion museum, the Legacy Museum, succinctly depicts the history of racism and violence from slavery, through the Jim Crow era, to police violence against and mass incarceration of African Americans, including children. It is a highly political statement that calls on American society to acknowledge the wrongs committed in the past and to address its reverberations in the present. 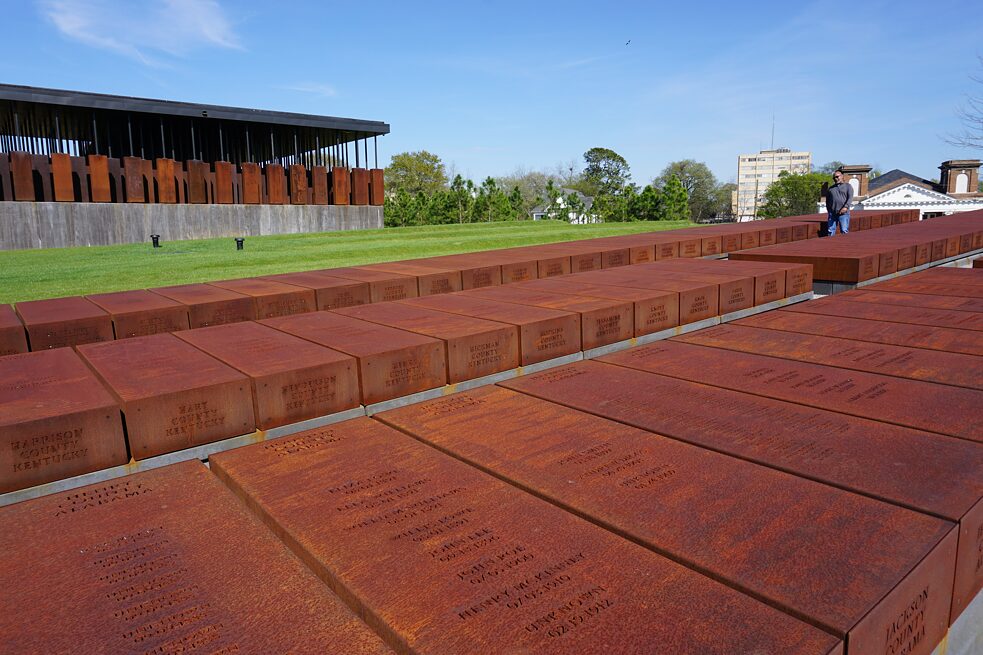 Das National Memorial for Peace and Justice in Montgomery, Alabama | Foto: Jenny Wüstenberg
However, at the same time, EJI has tried to trigger a decentralised commemoration that can only work if it is supported by local civic initiatives. The Memorial is composed of hundreds of suspended columns, each signifying a US county in which lynching occurred. Of each, a replica lies waiting to be collected by citizens, to be erected in each county. The “outcome” would be an impressive decentralised monument to the victims of racial injustice and violence.

But even more important here – as well as in Germany – is the process that is necessary to make such decentralised remembrance possible: it cannot be driven from above, but must emerge from civic initiative locally. Citizens must conduct research, practice public engagement, organise walking tours and exhibits – do the memory work, before a broad impact will be felt. And just like after 1945 in Germany, memorials built by civil society are not automatically good for democracy. There are plenty of activists working in the opposite direction, seeking to protect Confederate statues, for example. Making sure memory work is beneficial for democracy requires broad debate and sustained engagement, not just the temporary actions of a few.

This is a lesson that Germans today would do well to revisit. Anti-Semitic and xenophobic attacks (as well as the party-political and social media infrastructures that fan them) are on the rise in the Federal Republic. Long-standing calls to address Germany’s colonial past have only recently acquired a wider audience. Clearly, the existing “topography of memory” in Germany should not be seen as an excuse to lean back and tell others how to best “do over” their past. Civic activism is as needed as ever.