In Schwerin in 2015 supporters of the right-wing nationalist “MVgida” movement (Mecklenburg-Western Pomerania against the Islamisation of the Occident) demonstrated against the reception of refugees in Germany. | Photo (detail): © picture alliance/dpa/Jens Büttner

In his debut novel, the writer Lukas Rietzschel describes the lack of perspective and the radicalisation of two brothers who grow up in East Germany. In the interview he talks about populism and the brutalisation of language. 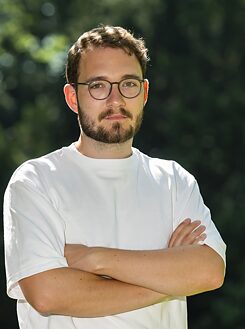 Lukas Rietzschel, born in 1994 in Räckelwitz in Eastern Saxony, lives in Görlitz. In 2021 his recent novel “Raumfahrer” (Spaceman) was published. Critics count him among the most important young writers in East Germany. | Photo (detail): © picture alliance/dpa/dpa-Zentralbild/Matthias Rietschel Mr. Rietzschel, in your novel “Mit der Faust in die Welt schlagen” (Hit the world with your fist) you tell the story of two brothers who become radicalised. This process is also reflected in the language. How much responsibility do you assume as a writer when you use terms like “Pollackenkacke” (Polack Poop) or “Volksverräter” (Traitor To The Nation)? Are you not preparing the ground for defamatory and populist language?

From my point of view, you have to look at this in a very differentiated way. As a writer, I reflect on the language and embed it in a context. In my novels I use certain expressions to show the effect on people’s behaviour – and to show how dangerous it is. Politicians, on the other hand, use certain terms to specifically initiate a discourse. It may be that as a writer I, too, with my choice of words, expand the field of what can be said and accepted. Nevertheless, I believe that politicians have a completely different responsibility and should serve as role models when dealing with language.

Do politicians live up to this role model function?

When politicians hold populist speeches, they instrumentalise the language for their own purposes. They don’t always think up the words straight away – of course, someone like the Bavarian premier, Markus Söder, talks to his advisors about the effect of terms like “Asyltourismus” (asylum tourism). What is perhaps not given enough consideration is the long-term nature of such words and how quickly they are adopted by society. Many people assume that if politicians are using them, then it must be acceptable for them to use them. That is why I think it is very important to draw very clear boundaries when it comes to language.

As a writer, what can you do about the brutalisation of language?

Neo-Nazis demonstrate on May 1, 2016, in Plauen, Saxony. | Photo (detail): © picture alliance/ZUMAPRESS.com/Michael Trammer What influence do social media have when it comes to spreading populist slogans? Is language being brutalised here, also because there are no restraining measures?

The internet deludes us into believing it has a certain kind of authenticity. Think of customer reviews, which are extremely important for the mail-order business in order to sell their products. As users, we assume that the person who wrote the review, also bought the product. That influences our decision to buy the product. This is exactly the mechanism that those troll factories in Russia use. They make us believe that it is real users who have rated a product or who do not like a certain politician. Such influence is of course dangerous on the political level, because it is very easy for people to connect with radical groups of the most varied directions via the internet. Opposite poles do not exist in such forums. This anonymous, mass mutual aggravation is something completely new, something that was unknown in our democracy up to now, and I consider this development to be alarming.

Why do some people feel attracted to radical groups?

This is particularly the case when all social points of reference have been eroded and this is when such groups offer support in a diffuse and overwhelming present-day situation in which there is apparently no longer any order.

You describe a similar phenomenon in your novel.

Yes. The external world of the protagonists disintegrates bit by bit. Friends move away or become addicted to drugs, the parents divorce and the big brother is no longer there as a contact person. This being left to one’s own devices and the feeling that everything is precarious makes people vulnerable to radical groups. Then, if external events such as the financial crisis or the so-called refugee crisis come along, events that cause things to collapse, no one adheres to the rules and the state seems overwhelmed; this then leads to an increase in the tendency towards radicalisation.

Does radicalisation also then lead to the brutalisation of language?

I believe that this perception has a lot to do with the media. Even if a large part of what is said or written is not populist, we mainly seize upon populist expressions.

When the AfD party started to win votes, there was a lot of discussion about the brutalisation of the German language. Björn Höcke, here at an election campaign event in Königs Wusterhausen in Thuringia, coined terms such as “soziale Patrioten” (social patriots), “Entartung” (degeneracy) or “Kartellparteien” (cartel parties). | Photo (detail): © picture alliance/ZUMAPRESS.com/Sachelle Babbar Is our society developing in a direction that shows a general tendency towards brutalisation and not just with regard to language?

I’m not that pessimistic. The pandemic in particular has shown how considerate and solidly united our society can be. Most people want to protect themselves and others from infection. Back in 2015, too, when Germany took in so many refugees, there was not only all those who demonstrated against them and perhaps even set fire to refugee centres, but also a great wave of willingness to help and willingness to take in refugees. I even believe that the bottom line is that we are much more compassionate, show more solidarity and act more concertedly than is sometimes postulated. And I have the impression that our civil society has progressed much further than our politicians have.

Martina Vetter is a freelance editor and author specialising in architecture and urban development along with film, theatre and culture. Her book “Kraftwerk Sendling – Eine Verwandlung” (The Sendling Power Plant – a Transformation) was published recently.