Satire Political Commentary in Words, Images and the Stroke of a Brush

Are the Germans simply better at laughing at themselves these days or are there just more opportunities? The fact is that caricatures, cartoons and memes have become an indispensable part of everyday life. The corona pandemic also provided and continues to provide an opportunity for satire. | Photo (detail): © picture alliance/dieKLEINERT/Martin Erl

The art form of the caricature has never been more visible than it is today. It was the classic drawing that dominated the scene for a long time, but this has now been joined by cartoons, memes and TV formats. This is a short history of caricature culture in Germany.

For a long time the caricature was considered the Cinderella of the visual arts. Until well into the 20th century, it led a shadowy existence in the world of artistic expression. Today, however, the caricature, once branded as a low form of artistic expression, and its close relation, the cartoon, are now to be found in all walks of everyday life: on the front pages of the major daily newspapers, in the comic sections of weekly magazines, on television, on social networks and on the advertising screens of the subway stations. The caricature has never been more visible in public than it is today.

The German caricature had to completely reinvent itself after the Second World War. When, during the National Socialist period, the media were forced to conform to the ideology of the Nazis, the caricature was also misused for inhumane purposes. And so, after the collapse of Nazi Germany, German cartoonists had to establish a completely new tradition of comedic illustration in order to publish their political comments in words, images and the stroke of a brush.

Caricature artists use comedy as a means of communication to provoke confrontation with what is going on in the world. They expose the supposedly ideal society and the actions of politicians and public figures. Sometimes this happens in just a simple drawing and a direct attack on people and current political affairs, sometimes in a very detailed illustration that serves to reveal an absurd aspect of everyday life. 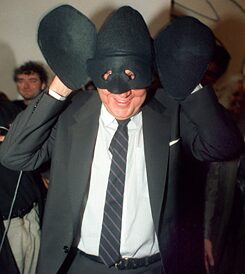 While Chancellor Kohl was not happy about his nickname “Birne” (the Pear), Foreign Minister Hans-Dietrich Genscher was all the more pleased with his: In 1989 he tried on a Genschman mask. | Photo: © picture-alliance/dpa/Roland Holschneider Some of these caricatures made it into the everyday language of Germany after 1945. For example, the satirical magazine Titanic, which has been commenting on political events since 1979, kept depicting the then Federal Chancellor, Helmut Kohl, with a pear-shaped head. It then did not take long before the nickname “Birne” (pear) was on everyone’s lips in the Federal Republic of Germany. And Kohl’s Foreign Minister, Hans-Dietrich Genscher, was not spared either – after Genscher suffered a heart attack in 1989, Titanic portrayed the FDP politician in the style of the comic superhero Batman under the headline, “Genschman mustn’t die!” This resulted in Titanic satirists developing an entire comic about this superhero figure. The term “Genschman” became also commonly known to describe the foreign minister of German reunification.

“The Pear” was so linked to Helmut Kohl that even on the occasion of his death in 2017 this image was of course resurrected, as here in this caricature by Andreas Prüstel. (You can’t comPEAR apples with oranges!) | Photo (detail): © picture alliance/dieKLEINERT.de/Andreas Prüstel

Once an Object of Ridicule, Now in the Museum

Meanwhile, the cartoon is also considered to be on an equal footing with the caricature. Formats such as the weekly cartoon Am Rande der Gesellschaft (On the edge of society) by the cartoonist duo, Hauck & Bauer, are very popular in the Sunday edition of the Frankfurter Allgemeine Sunday newspaper. However, some cartoons are also widely distributed via social media – a cartoon by the illustrator, Ralph Ruthe, on the debate about the school strikes of the Fridays for Future movement did not just have a far-reaching impact in its original form in German. The translation of the cartoon into English was also shared thousands of times on social networks and discussed and laughed about all over the world.​​​​​

We require your approval to load the Twitter service!

I agree to the transmission of data between my browser and Twitter. 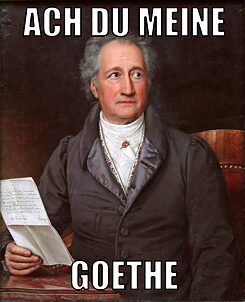 Yes, Goethe also found his way onto the meme scene. The original painting is by Joseph Stieler from 1828. Who perpetrated the meme? We just don’t know. (“Ach, du meine Güte” = Good Grief!) | Photo (detail): © public domain Both caricatures and cartoons are much more present in everyday life than ever before and have long since ceased to appear only in the print media. Political satirical TV magazines, such as the heute show on Germany’s second public broadcasting channel, ZDF, in which caricatures and cartoons illustrate the presenter’s stand-up programme at the beginning of each episode, have made cartoons and caricatures an integral part of TV culture. In the meantime, memes from the internet have also found their way onto the scene. Above all, however, in the social networks, users express their bad mood with the annoyed-looking “Grumpy Cat”, celebrate success with the “Success Kid” meme, in which a baby on the beach looks resolutely into the camera with his hand clenching a handful of sand into a fist, or reacting to things with the unsympathetic “Facepalm” meme, which most often shows the actor, Patrick Stewart, in his role as Jean-Luc Picard in Star Trek, who cringingly hides his face in his hand, embarrassed on account of other people’s behaviour.

The establishment and dissemination of caricatures and cartoons has led to a different appreciation of satirical drawings. Whereas a few decades ago the caricature was ridiculed as a lower art form, today it is exhibited in museums and given prizes. The Caricatura Museum in Frankfurt and the Wilhelm Busch Museum für Deutsche Karikatur (Wilhelm Busch Museum for German Caricature) in Hanover exhibit caricaturists such as Greser & Lenz, Gerhard Haderer and Frank Hoppmann. In addition, for over 15 years the best caricatures and cartoons have been awarded the German Cartoon Prize, which is awarded annually at the Frankfurt Book Fair, and the German Caricature Prize.

Moritz Post is a literary researcher and works in the editorial department of the satirical magazine TITANIC. He lives in Frankfurt am Main.