Journalism in Russia “Distinguishing between Facts and Fiction”

The press in Russia - between government restrictions and the side effects of the digital transformation | Photo (detail): © Kirill Zharkoy on Unsplash

The hope of an editor-in-chief that journalists in Russia may die of old age points out the risks facing the profession there. Journalist and media scholar Ksenia Luchenko writes about the gruelling business of reporting and free expression in her home country and the crisis of traditional journalism.

In 2021, the Norwegian Nobel Committee awarded the Nobel Peace Prize to two journalists: the editor-in-chief of Russia’s Novaya Gazeta, Dmitry Muratov, and the founder of the Philippine medium Rappler, Maria Ressa. In his acceptance speech, Muratov said that “the award today goes to the entire community of investigative journalists”. This is how the award was understood in Russia. Novaya Gazeta is the only medium in the Russian media landscape founded after the collapse of the Soviet Union that has survived to this day under its original name and with an unchanged core of editorial staff. It also follows the tradition of classical journalism and adheres to the principles of independent media. Muratov, who stood on the podium in Oslo on behalf of all Russian journalists, addressed two important moments in his speech that in many ways describe the self-perception of this community: “The ‘philosophers’ ship’ has been replaced by the ‘journalists’ plane’” and “I want journalists to die old.”

The editor-in-chief of Novaya Gazeta had to bury six of his staff members who were murdered in previous years for their journalistic work: Being a journalist, writing about socio-political issues and doing investigative work – in Russia, all this involves being exposed to mortal danger and never reaching an advanced age.

Muratov’s “philosophers’ ship” refers to an event in Russian history: the forcible expulsion of philosophers and university professors from post-revolutionary Petrograd (editors’ note: today’s Saint Petersburg). Quite a few of them left Russia on two ships in the autumn of 1922. Today, journalists are turning their backs on Russia after the government has declared the media they work for or they themselves “foreign agents”. In reality, this means not only being dishonourably branded as modern “enemies of the people,” with which every “agent” is obliged to label any public expression of opinion – including birthday wishes to friends via Facebook. It also entails restrictions on legal freedoms and the need to provide proof of every rouble received or spent.

In 2021, according to the human rights organisation OVD-Info* (see below, editor's notes), about a thousand activists and journalists left Russia, mainly because they were persecuted and threatened for political and fiscal reasons. Most of them emigrate to the Baltic states and Georgia. Roman Badanin*, the former editor-in-chief of the investigative media Proekt*, who left for the USA and who – like almost the entire editorial staff – was classified as a “foreign agent,” coined the term “offshore journalism” for new Russian-language media in exile. 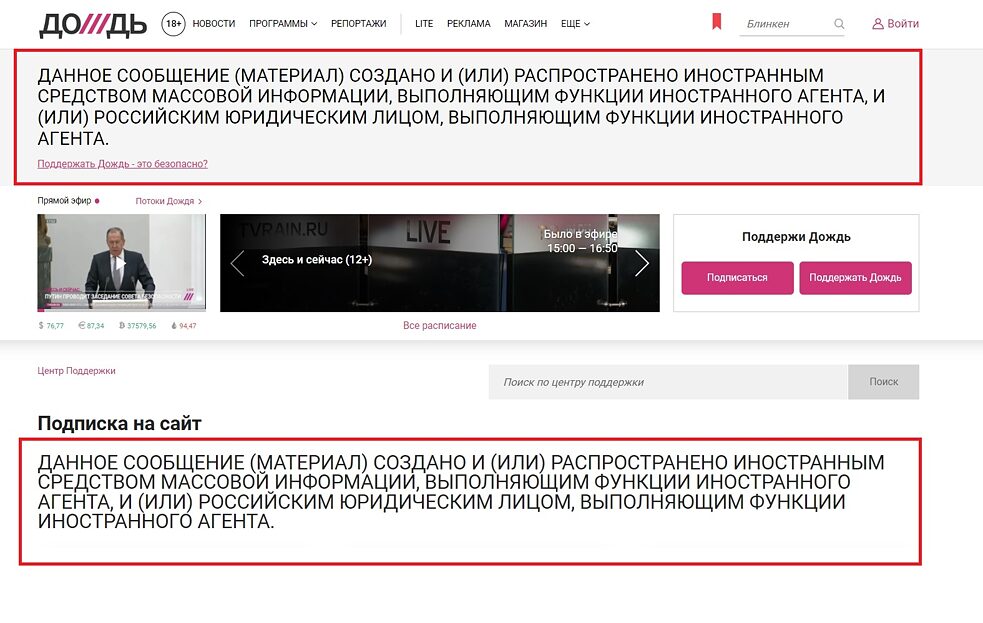 Website of the independent television channel Dozhd, which has been classified as a “foreign agent” in Russia. A mandatory warning message about this status as an “inoagent” is displayed with every news report. For the better understanding of foreign readers, the warning message is outlined in red. | Screenshot taken 21.02.2022 of the website tvrain.ru

Freedom of Speech and Media in Transformation

The federal Law on the Media was one of the first laws ratified in the newly free Russia in 1991 and was considered one of the most democratic, thoughtful and liberal in the world. However, in the last decade, Russian legislation on freedom of expression and mass media gradually became more and more severe. For example, state bodies have been given the right to block websites in pre-litigation if they contain references to suicide practices or drugs. As a rule, however, the officials do not dwell long on the content of the articles about which complaints are received. Or else they deliberately intimidate specific media, which is why many investigative reports were subject to the law – some even in a dual sense: if, for example, material was published on a wave of suicides among oncological patients who could not legally obtain painkilling drugs. Subjects like this can therefore no longer be reported on by journalists at all.

This was followed by laws stating that foreigners could not own more than 20 per cent of the capital in Russian media, bringing print products formerly owned by international holdings such as Sanoma, Axel Springer and others under the control of pro-government structures. Furthermore, these laws on “media inoagents” (editors’ note: inoagent = foreign agent,) and physical persons as “inoagents” were pushed forward, forcing journalists to either live with a stigma ensuring no one will hire them or to emigrate. At the same time, other laws were passed that also restrict journalists – one about slighting creditors, another about disparaging the government and spreading fake news.

Against this backdrop, there was a split within the journalism community. Some journalists were willing to work for media where the censorship was covert or even overt. Others continue to look for opportunities to write for independent media – the numbers of which continues to decline, as does the income to be earned here. The former condemns the latter for their idealism and disproportionate risk-taking, the latter accuses the former of conformism and betrayal of their profession.

Crisis of Journalism in the Digital Age

Alongside this Russia-specific problem, journalists in this country are struggling with the same problems as their colleagues around the world – a crisis in their profession caused by digitalisation. In the previous two centuries, traditionally trained journalists had a monopoly on providing their audience with news and documentary stories; they mediated between elites, society and different groups within that society. Now, blogs, social networks and other forms of new media are taking over this role. As Andrey Mir, a media lecturer at York University (Toronto) and author of Postjournalism and the death of newspapers. The media after Trump: manufacturing anger and polarization (2020), writes, “The newspaper industry is therefore heading towards five years of agony following by ten years of convulsions, before its death.”

Traditional journalism, awarded by the Nobel Committee in the persons of Muratov and Ressa, differs from other professions in the media field (blogging, PR, storytelling, marketing in social networks, etc.) only in one respect: its ethical codes and professional standards. And it is precisely these that guarantee quality in the handling of information. This is based on materials that have been written, photographed or filmed by journalists and that have been editorially checked. But here too, not everything is as simple as it seems. Both traditional print media, which have been transferred to the internet in an almost unchanged form, and television, with programmes on several channels, emerged during the industrial era and were in line with the political culture of modernity. Throughout the history of traditional journalism, there have been constant struggles for independence as well as discussions about abuse of power by the owners of media houses. Ethical codes of editorial practices emerged to protect both journalists and readers from manipulation by owners of media holdings and political forces. The aim was to prevent advertising clients from influencing the content of publications.

These codes slowly erode and turn into ideological constructs that, ethically speaking, cannot always be implemented in detail. Does one still wait for confirmation from a second source when the information has already surfaced on social networks? Do all parties need to have their say, for example, when one party questions the existence of the coronavirus or is accused of sexual harassment? As a journalist, is it permissible to participate in activism, to openly show solidarity with a certain social force, or is this a conflict of interest? These are just a few of the many questions whose answers used to be obvious, but which now have to be looked at anew. The concepts of impartiality and objectivity, which were the foundations of journalists’ work for several generations, are no longer so clearly definitive.

And yet, no other more reliable guarantees for the quality assurance of information have been developed so far than the professional working standards of traditional journalists. That is why in Russia the most successful and popular vloggers, interviewers and makers of documentaries, which are viewed on YouTube by millions of Russian-speaking users, are former journalists from television and major media who were prevented from working in traditional journalism due to censorship restrictions.

“Our Mission Is Clear”

Journalism as an institution needs to re-evaluate its main function for society: Do journalists communicate to the masses what the elites consider appropriate and who “know everything better” (here not only the political elites are meant, but meritocratic society as a whole) or do they provide society with a new language for solving its problems and return to their function as mediators and translators?

The public no longer expects journalists to provide exclusive news and commentary because they are created in real time by the algorithms of social networks and selected by a collective intelligence that Andrey Mir calls “the Viral Editor”. But the verification of information, its contextualisation and navigation are still the responsibility of journalists. In Russia, those who practice the profession are sandwiched between government pressure and the digital transformation. “We are journalists, and our mission is clear – to distinguish between facts and fiction,” Muratov said in his Nobel speech. This mission is becoming increasingly complex.

OVD-Info is an independent media project in the field of legal protection against political persecution in Russia. After being designated a “foreign agent,” the project’s website, ovdinfo.org, was blocked in Russia by the Roskomnadzor (a federal supervisory service for intelligence, information technology and mass communications) following a court decision on the grounds of “terrorist and extremist propaganda” in the project’s activities.

Proekt is a medium specialising in difficult journalistic genres: investigative journalism, stories, portraits and analysis on open data. Classified as a “foreign agent,” the website www.proekt.media was blocked by the Roskomnadzor in Russia at the request of the Prosecutor General’s Office; the project’s activities were classified as “undesirable.”