When Europe was hit by the Covid-19 pandemic in March 2020, the Sicilian legal scholar Elena Militello was working at the University of Luxemburg. Her faculty immediately decided to switch all teaching and research activities online for the remainder of the academic year. Militello took a decision that she does not regret to this day: she climbed into her car and drove more than 2,000 km to Palermo, the city of her birth that she had left at age 17 in search of better training and employment opportunities, like so many southern Italians of her generation. 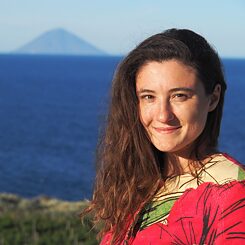 Elena Militello | Photo (detail): © Carmelo Ignaccolo For the first time in over ten years, the academic had the chance to spend more time than just the usual summer holidays or occasional weekend close to her family and childhood friends without having to neglect her career in order to do so.

Together with six others who had shared a similar fate and were now continuing to work for companies in northern Italy or abroad but were doing so remotely from their homes in southern Italy because of the pandemic, she set up the association “South Working – Lavorare dal Sud”. The organization researches and promotes the phenomenon of working from a home base in southern Italy.

An opportunity for the south

“We quickly realized that this new form of remote working could present an opportunity for the south of Italy and other rural regions in the interior of the country,” explains Militello.

This is an opportunity that Italy’s south desperately needs: during the first 20 years of the 21st century, nearly one million people emigrated from the south of Italy to the north of the country or abroad. The chances of finding employment in southern Italy are poor, especially for young people and women. Only one in three women under the age of 30 finds work in Sicily, and youth unemployment in the region is close to 50%.

“One of the facts I find shocking is that emigration among people with school or university qualifications has soared by 43% in the past eight years,” says Militello.

However, the number of people who took advantage of the pandemic to return to their homes is also anything but small. A study conducted by South Working in cooperation with the economic research institute Svimez registered approx. 100,000 people who moved back to their home regions in the south in 2020 in order to continue working for their employers elsewhere remotely.

This reversed migration is good news not only for the returnees themselves, whom Militello calls “south workers”: “The region itself is also profiting, partly of course because the south workers are now spending their salaries locally.” According to Militello, the south workers are not only injecting new liquidity into the region; they are also bringing about further-reaching changes – renovating abandoned houses, reviving family-owned businesses and establishing new enterprises.
“What gladdens my heart the most is that people are reviving and taking part in local life and actively contributing their ideas to improve services and infrastructures,” Militello says.

One example of successful collaboration between south workers and the local community can be found in the small hilltop town of Castelbuono in Sicily’s interior. A room in the 14th-century city palace and another room in the cloister of a monastery have been turned into community offices with a fast broadband connection that are now regularly used by nearly 200 local people.

Away from the 9-to-5 mindset

As Militello explains, however, south working will only be really successful if people can be persuaded to abandon the 9-to-5 mindset that is still deeply entrenched in Italian companies.

“Flexible working models have advantages not only for employers, in the sense that they can shift the focus to the achievement of targets and productivity, but also for employees, who are then able to choose where they wish to work and re-establish relationships that they were frequently forced to give up when they had to move to a different city for work.”

It remains to be seen whether south working will also help prevent highly skilled workers from moving away in the longer term.

“In the past, this was regarded as an irreversible and unalterable trend. Now we can at least hope that something might change after all.”