The present from the guests: an apple from Ukraine | © Moritz Ellerich

As we sit here drinking black tea with sugar, bombs are falling on Kyiv. I notice my hand shaking as it reaches for the sugar bowl. “Brown sugar doesn't dissolve well,” I type into the translation app.

Tatiana and Lina, aged 61 and 36 respectively, are sitting opposite me. The architect and the accountant fled Kyiv a week ago with Lina’s two children and finally made it to Düsseldorf via Poland, Dresden and Dortmund. When we welcomed them last Sunday, all they had with them was two plastic bags, one containing clothes, the other water bottles, some crispbread and three apples. I can still remember how Tatiana fished the apples out of the bag and set them on the table as a gift for us. “They’re from my garden,” Tatiana said with a smile.

As we sit here drinking black tea with sugar, the lively four-year-old Arina, is romping around beside us. Standing a little ways away from her is her rather shy brother Dani. He’s nine years old and his birthday is the same day as mine. And Lina, Dani’s mother, was born the same year as me: we’ll both be turning 37 this year. So I, too, could be sitting in an unfamiliar flat facing an unfamiliar woman who talks about a certain kind of sugar and how it won’t dissolve.

No Common Language, But We do Share a Meal

Ever since our Ukrainian guests moved in, the whole house smells of food. Tatiana and Lina cook soup and fry meatballs, so, although we’re actually vegans, we’ve been eating chicken soup and bacon. We’re making an effort to remove any barriers between us, at least as far as we can. We don’t have a common language, but we do share meals. We want to do whatever it takes to make Tatiana, Lina, Arina and Dani feel at home here with us.

As we sit here drinking black tea with sugar, bombs are falling on Kyiv. Lina’s sister Olena is stuck in a bunker in Kyiv. She didn’t escape to Germany with her family because her own son, Ivan, turned 18 in January. Because of this, he wasn’t allowed to leave the country. And as Tatiana and Lina show me pictures on their phones of Ivan, a handsome young man with still youthful, even childlike, features, I think of my own eleven- and seven-year-old sons. What an absurd idea that one day, my boys should have to take up arms to defend our country; my sons Lasse and Jim, whom I zealously try to teach to resolve every problem non-violently.

The first few days, I tiptoe around the three apples from Tatiana, as if they were a secret treasure. I wanted to see those Ukrainian apples just like that, there in our fruit bowl between the yellow lemons and shiny oranges, forever.

But before long I noticed a brown spot on one of the shiny red apples. So I grabbed the apple and, with a heavy heart, sliced it up. It seemed brutal to me to stick the knife inside to liberate it from its core. What precious, priceless muesli I’ll be having for breakfast.

As we sit here drinking black tea with sugar, Olena and Ivan over in Kyiv can feel the shock waves from the bombs detonating near their bunker. The vibrations shake up the whole earth – even us. Tatiana starts to cry. Lina reaches for her phone and types something into Google Translate, which is the only way for us to communicate verbally. “Olena did not want to leave her son alone,” says the automatic translator in a monotone without the slightest trace of feeling or human warmth.

On the second day after their arrival, Tatiana and Lina are already talking about returning to Ukraine. They’ll go back in the spring – they’re sure about that. There is something convincing about the way they talk about going home soon. I nod my head and confirm.

Whilst Olena and Ivan are feeling the impact of the bombs falling near their bunker, I reach for my phone and speak into Google Translate, “Parents don't leave their children alone.” Then I press the loudspeaker icon on the display. Instantaneously, the unfamiliar Cyrillic script shimmers at me like a secret language: “Батьки не можуть залишити своїх дітей.” As the voice translate function drones in Ukrainian, “Batky ne mozhut zalyshyty svoikh ditei,” I gaze into Tatiana and Lina's eyes to see whether the line has been translated correctly. Their eyes are all I have to go by. Tatiana and Lina nod their heads vigorously in synch to show that they’ve understood what I said. I nod too and reaffirm, “Yes, parents don't leave their children alone.”

Tatiana and I are slicing and dicing apples for an apple pie because we’re expecting guests today. We’ve invited two other women who fled Ukraine with Tatiana, Lina, Arina and Dani and are staying with other friends in Düsseldorf. I’ve included one of the apples from Tatiana's garden for the pie. Tatiana and I have tacitly divided up the labour: she peels and I slice. It hurts less when you share a memory, when you cut it up to make a pie that everyone will like. 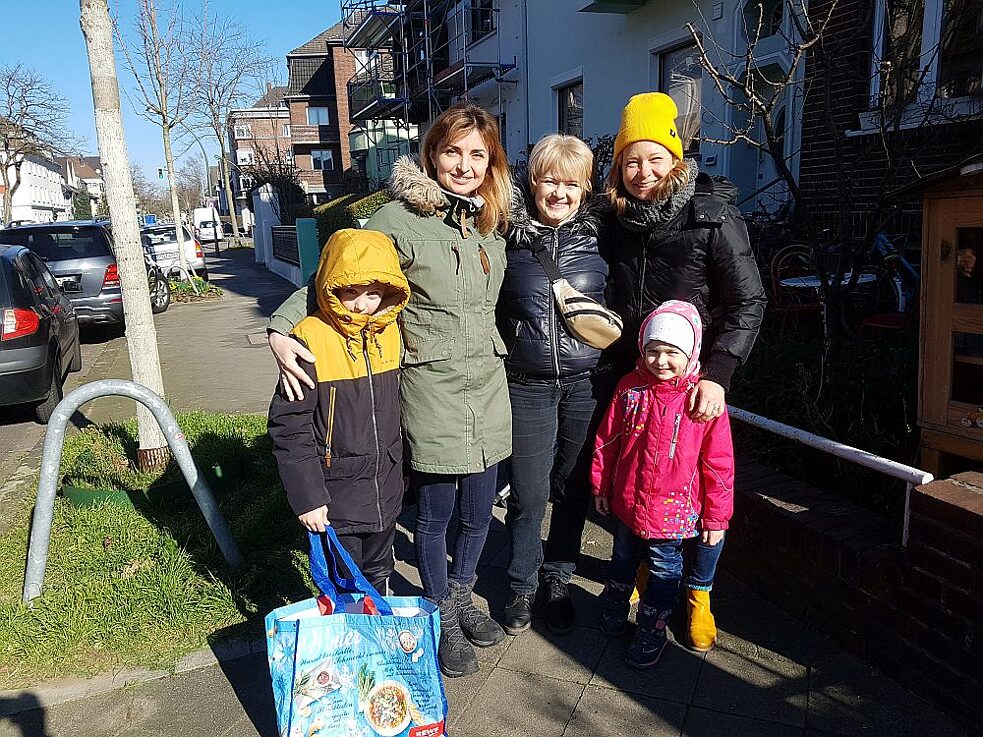 Vera Vorneweg (r.) with the Ukranian family | © Moritz Ellerich At night I wake up and think about Olena and Ivan stuck in that bunker in Kyiv. They might run out of food in a few days. The supermarkets are already empty, Tatiana said over tea, so everyone is already living off the supplies in their cellars. Which reminds me once again of the three apples Tatiana brought and the last remaining apple in our fruit bowl down in the kitchen.

The clock says 4:58 as I slip downstairs to the kitchen. I turn on the radio. As reports come in of renewed shelling in Kyiv and the destruction of a maternity ward in Mariupol, I look out into our little garden in the dark night and think about how suddenly this world has tumbled into gloom. As I turn round, my gaze wanders over to the fruit bowl and to the last Ukrainian apple holding out there, bright and red-cheeked amongst the lemons and oranges. Now I hear the voice of Ukraine’s President Volodymyr Zelensky on the radio. He’s encouraging the people of Ukraine to prepare the fields in order to sow the wheat as soon as possible. No one should give up hope for Ukraine, he says, for the free and democratic country.

I peer into our little garden, into the slowly breaking dawn, wondering where a good spot might be to plant an apple tree.

Vera Vorneweg, born in 1985, lives in Düsseldorf. The award-winning author studied social work and philosophy in Düsseldorf and Israel. Her debut “Kein Wort zurück” (No Word Back) has just been published (Edition Muschelkalk im Wartburg Verlag). For readers who feel encouraged to also take in people from Ukraine, she recommends the placement platforms “Unterkunft Ukraine” and “Shelter for UA”.