The Swiss Basic Income association took the idea all the way to a referendum – but the Swiss people voted against it. | Photo (detail): Ennio Leanza © picture alliance / KEYSTONE

The idea of guaranteeing everyone an unconditional basic income seems tempting to many people. But laypeople and experts alike have been arguing for many years about whether – and, above all, how – it might work. A pilot project in Berlin is now looking for new answers to these and related questions, which could rekindle the debate in Germany.

When she first read the email, PhD student Lisa Buchenauer assumed it was spam. Sitting there in the tram in Leipzig on her way home, she scrolled up and down, and just couldn't believe it: she, of all people, was to receive a basic monthly income with no strings attached for three whole years. She was so surprised that she emailed a researcher at the German Institute for Economic Research (DIW) for confirmation: the DIW is collaborating on a study called the Basic Income Pilot Project, under which Buchenauer was to receive money. She’d found out about the study, which was initiated by an association in Berlin called Mein Grundeinkommen (My Basic Income), quite by chance.

That was in July 2021, and Buchenauer's bank account has been credited with 1000 Euro every month since then. This is the first pilot project on basic income in Germany, and it involves three successive studies. The first study, which is ongoing, has a total of 1500 participants; 120 of them, including Lisa Buchenauer, are to receive a guaranteed sum every month for three years. The idea is to test the effects on the recipients by comparison with a control group.

An Idea Older than the German Social Security System 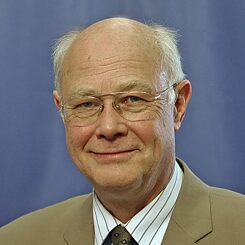 Economist Rigmar Osterkamp has been observing the topic of unconditional basic income for years. | © private After the 2020 call for participants, several hundred thousand people signed up for the study. Many who’d lost their livelihood due to the pandemic were drawn by the prospect of financial security for a few years’ time. And many of the candidates also signed petitions and letters urging the federal government to establish a universal basic income (UBI). “The idea keeps coming back in waves,” says Rigmar Osterkamp, an economist who’s been studying UBI for years. And over the years, he’s seen the idea catch on again and again – as an answer to digitalization, as a way to simplify unemployment benefits, or as an opportunity to shrink the bureaucracy in the social security system.

And yet the idea itself is older than many of the problems it’s supposed to solve today. The US economist Milton Friedman espoused the idea back in 1962, and some even trace it back several centuries to the English statesman and Renaissance humanist Sir Thomas More, the author of Utopia.

Does an Unconditional Basic Income Make You Happy or Lazy?

Various basic income models are under discussion, ranging from a flat-rate payment for everyone and the abolition of all other state transfer payments (e.g. child benefits) to a negative income tax under which only those earning less than a certain monthly amount receive money. The classic arguments for UBI are the many jobs that will be lost to new technology, the heavy administrative costs of social security offices, and dwindling confidence in the state. But the counter-arguments carry equal weight: a universal basic income would drive the federal budget sky-high and risks creating a “social hammock” that might induce people to stop working altogether.

Furthermore, many questions remain unanswered: What extra benefits would be paid to people with special needs, e.g. those with physical disabilities and single parents? How do we need to change the very concept of citizenship to make allowance for such unconditional payments? Should kids receive the same amount as adults, and if so, up to what age should parents get to decide what happens with the money? And what if nobody wants to drive a bus or scrub toilets anymore? 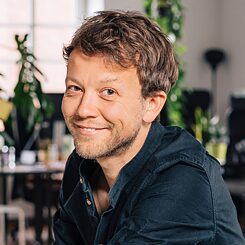 Michael Bohmeyer is the founder of “Mein Grundeinkommen“ (“My Basic Income“). | Fabian Melber Michael Bohmeyer is quite familiar with these questions. Eight years ago, this Berliner founded Mein Grundeinkommen (My Basic Income) and raised money for the association through crowdfunding. Every time 12,000 euros are collected, the money is raffled among the registered participants. As a winner, you receive 1,000 euros of income per month for one year. Over 200,000 donations have been made to date, funding more than 1000 basic incomes. Many beneficiaries have told Bohmeyer that having a basic income to rely on has put their minds at ease and even changed their lives. But this positive feedback is often dismissed as “anecdotal evidence” devoid of any empirical significance.

Which is why his association launched the Basic Income Pilot Project, in which Lisa Buchenauer is taking part. It’s a study conducted separately by the German Institute for Economic Research and researchers from the University of Cologne and the Vienna University of Economics and Business (WU). To find out what impact the monthly stipend has on people, Lisa Buchenauer and over a thousand members of a control group are to answer six questionnaires over the course of three years. Additional methods are used to ascertain how recipients change their behaviour and how they’re feeling, e.g. analysis of their mobility data and even hair samples to measure stress levels. Bohmeyer and the researchers are hoping their findings will provide empirical proof of the impact a basic income has on people’s lives.

But Lisa Buchenauer already realizes that her basic income has changed her life. “Until a year ago, if my washing machine had broken down, I’d have had a real problem on my hands,” explains the nutritionist. “A PhD student doesn't earn a bundle, so there’s no way to save any money.” Now she feels more secure: for the first time in her life, she can save up for a rainy day and these days she’s glad she doesn’t have to worry about the current inflation. But it’ll be a while before her feedback and other findings are to be worked into the study. The initial results will be presented in the summer of 2022. This phase of the study will continue till 2024, after which the pilot project will go on to experiment with different monthly amounts and varying tax rates, as well as with larger and more heterogeneous groups. 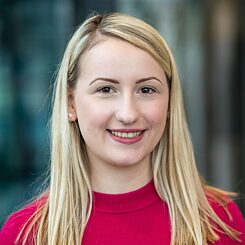 Thanks to the basic income, PhD student Lisa Buchenauer has a nest egg for the first time and feels more secure. | © Sebastian Wiedling / UFZ This experiment in Berlin is by no means the first of its kind. More than a dozen experiments with basic income have been carried out to date, including a famous experiment in the US back in the 1970s, the results of which have been re-evaluated several times over the past half-century. Basic income made headlines especially in Finland, where, from 2016 to 2018, the unemployed no longer saw their complementary earnings deducted from their unemployment benefits, so this made for a real-life simulation of unconditional income. And in Kenya, several thousand people are currently receiving a living wage through direct donations via the American non-profit GiveDirectly. They, too, are surveyed on a regular basis.

Osterkamp, the economist, is sceptical about many of the past experiments. He considers the Berlin experiment’s pool of only 122 participants an “extraordinarily small sample”, even though that was clearly owing to budgetary constraints. And he feels other experiments have focused on the wrong groups, e.g. confining the sample to the unemployed in Finland. “Technically speaking, I’d say only two of the experiments so far are really good.” The big experiments in the US four decades ago were carried out very systematically, he says, with expert support from several universities and a large sample. He also commends the current experiment in Kenya, which has the advantage of being long-term and involving a big pool of participants.

In any case, some interesting findings are already in: The divorce rate went up in the American experiment, and the Finns reported improvements to their mental well-being. The first results from Berlin are not expected till next year. But Bohmeyer already points out: “There’s no indication from any UBI pilot project in the world that UBI leads to working shorter hours. And we aren’t expecting this to emerge in our pilot either.” Over the past few years, he has observed “a lot of changes, but no inertia in the raffle winners. On the contrary, they actually become more productive. Some change jobs because with an UBI to rely on they can look for a job that really suits them. It looks as though basic income eliminates anxiety about one’s livelihood and makes work better.” And yet, despite numerous experiments and such encouraging results, not a single nation has introduced an unconditional basic income yet. Osterkamp says there’s a simple reason why: “No experiment can tell us with certainty what behavioural changes are triggered by a basic income.” For one thing, if and when a universal basic income is introduced, the resulting paradigm shift is likely to be so huge that it can’t be simulated by experiments, which are always limited in time and to certain groups. It’s hard to predict scientifically how wages, motivation to work and the social climate would change if, say, your neighbours, teachers and cleaning lady all received a basic income. Lisa Buchenauer's reasoning points up the limited utility of a short-term experiment: “I keep in mind that it’s going to stop at some point, which is why I haven’t used the money to raise my standard of living,” she explains. On the other hand, UBI advocates and sceptics alike are going to parse the results of even the more cogent studies in a way that fits their preconceptions. Take the increased divorce rate in the North American experiments, for example. Naysayers saw it as evidence that a universal basic income would cause “moral decline”. Yea-sayers, on the other hand, considered it a positive development: women were no longer economically dependent on their husbands, they could emancipate themselves and take control over their own lives.

So is it futile to conduct experiments and debates about a universal basic income? Osterkamp doesn’t think so. A lot has happened over the years since he first began researching this subject, he says. The biggest step recently is the current German government’s plan to introduce a basic income scheme called Bürgergeld (i.e. “citizen's income”, a term drawn from the German UBI debate, by the way), which is to replace “Hartz IV”, the system of basic security benefits for job seekers, and is supposed to be easier to qualify for. “This is a step towards basic income without calling it that,” observes Osterkamp. Lisa Buchenauer can’t say whether a basic income could actually resolve social and economic problems in the long run. Even after a year on a basic income, she wouldn’t unequivocally call herself an advocate. “Then again, I do think the social security system needs a sweeping change.” In the meantime, she adds, further research is just as essential. For which she’s doing her bit too.

Lea Hampel is a freelance journalist focusing on topics that concern economy and society.