More Democracy in the Workplace A Path toward Good Work?

Making companies more democratic and participatory is one of the biggest goals in the working world nowadays. This article takes a look at Germany’s worker participation and how it has caught on in Spain and Europe as a whole.

Worker participation in decision-making (betriebliche Mitbestimmung) has bolstered the connection and cooperation between workers and employers for several decades now in Germany. Companies with a workforce of five hundred or more are required by law to put mechanisms in place to give workers a say in the running of their company. These mechanisms date back to the late 19th century and eventually took legal form in German coal and steel companies in the 1950s. Since then, betriebliche Mitbestimming has wrought a paradigm shift in industrial relations and industrial culture in Germany, providing for far more worker participation and democracy in the workplace – with marked advantages over vertical, authoritarian management models.

But what about participation and democracy in the workplace outside Germany? “Germany’s example is really interesting and different,” explains Sara Lafuente, a researcher at the European Trade Union Institute in Brussels. “Although other countries have tried to imitate that model, the fundamental difference is that the German regulations are far more exhaustive. There are guidelines and decision-making levels for employees that vary according to the size of the workforce. As a result, decisions have to be agreed by and between labour and management. So when I translate the term Mitbestimmung, I prefer to talk about ‘co-decision’ rather than ‘co-determination’.” In the German model, workers are members of the Aufsichtsrat (supervisory board), which has oversight and in some cases even a right of veto over the Vorstand (executive board) and has a say in decisions like managerial appointments, pay and changes in the company.

The European Union as a whole is intent on making the workplace more democratic, as explicitly set forth in a proposal adopted by the European Parliament in December 2021. Introduced by German MEP Gabriele Bischoff and backed by the S&D (Socialists and Democrats) Group, the bill calls on the Commission to update and review the mechanisms for greater workplace democracy and find common ground between companies in the Member States. “Democracy is alive when citizens can participate and have a say in every sphere of their lives, including the workplace,” Bischoff declares in her report to the European Parliament, which still has to approved by the Council. Lafuente points out that “legislators still have a lot of work to do before the model is adopted and implemented, but it’s an important step forward – including in the context of the COVID-19 pandemic, which has made many workers rethink their relationship to work.” Whether or not Europe moves towards a uniform model of workplace democratization, what about other specific countries, such as Spain?

In Spain, says Lafuente, participation models “have never been seriously considered. The usual model of trade union participation in Spain can’t compare, even though an attempt was made at some point to establish that model in wholly or partly state-owned companies.” Lafuente points to companies like Navantia, Hunosa and Tragsa, in which union representatives have a certain – albeit minority – presence on the administrative boards. Workers in Spain are most directly involved in company decision-making in cooperatives. Although they’re usually associated with small and medium-sized enterprises here, some Spanish cooperatives have thousands of workers. The most important one is the Mondragón Corporation, a group of companies made up of industrial cooperatives with more than 37,000 workers, 80 per cent of whom are members. 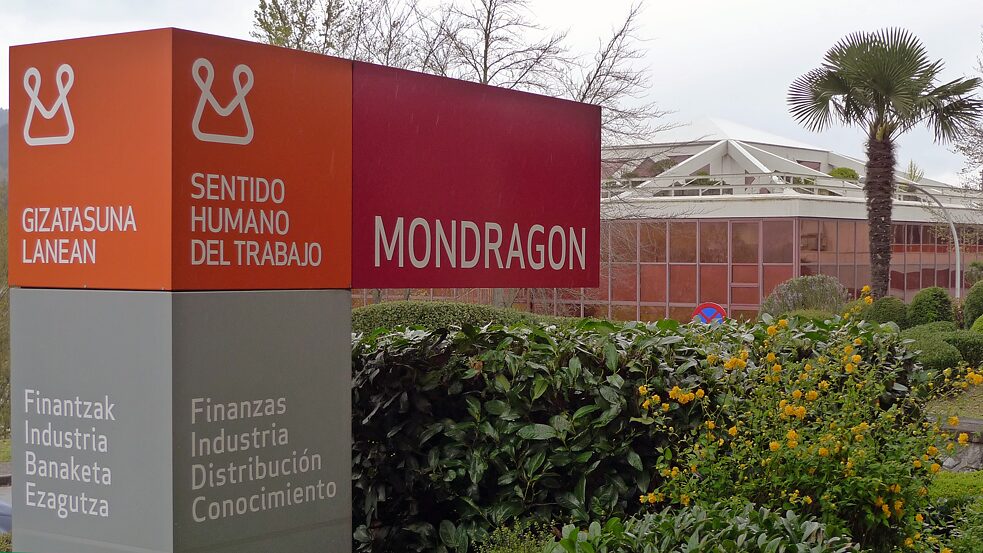 The Mondragón company was founded in the 1950s by the priest José María Arizmendiarrieta in the Basque Country. | Namensnennung 2.0 Generic (CC BY 2.0): Colaborativa dot eu Mondragón’s history is rather unusual. The cooperative was founded in the Basque region in the 1950s by a parish priest named José María Arizmendiarrieta. Original documents from the time suggest that “he had the German model of participation in mind when he set out to create a fairer company,” explains Ander Etxeberria, head of public relations at Mondragón. Back in the ’50s, Arizmendiarrieta wrote about his idea of dividing business management up between three parties (workers, shareholders and a mixed third group) and chose the cooperative model from among the legal options available in Spain. Mondragón remains faithful to this model today, and its employees may choose to become members after a few years. Fagor is a Mondragón industrial cooperative in Tafalla, Navarra, that manufactures household appliances. Óscar País, a factory worker and member of the cooperative there, feels that “Working in a cooperative involves very different aspects from working in an ordinary enterprise. You’re co-managing the company, in a way, and every time you cast your vote you feel more united.” País started out at the company sixteen years ago as a production technician and now heads the occupational risk management department.

In addition to cooperatives, a number of other companies in Spain have also taken steps to involve the workforce, even if that may seem to run contrary to their bosses’ wishes. Employees at Software DELSOL, for example, a tech company based in Mengíbar, have opted for a four-day working week since the beginning of 2020. 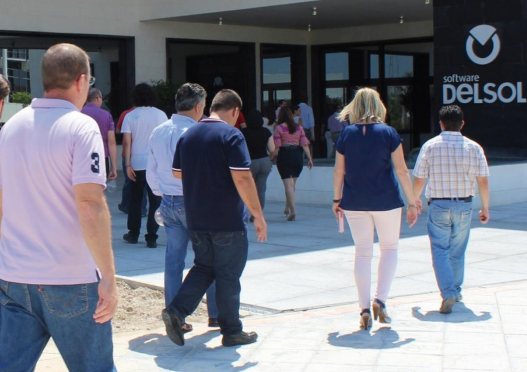 Software DELSOL employees enter the company. | © Courtesy of Software DELSOL Ana Arroyo, the company’s head of human resources, explains that every year the personnel are asked to make suggestions for improvements: “The majority of them felt they didn’t have enough time off. So we decided to propose a four-day working week, which everyone approved.” So DELSOL has anticipated the current debate over similar proposals for a shorter working week. “Giving workers a say,” she adds, “has always helped the company attract and keep talent,” which is vital in the tech sector in particular – and all the more so if, like DELSOL, the company is located far from a big city.

It remains to be seen whether these exceptions, which give workers a voice and a say in the running of the companies, will become the rule in the months and years to come. But it does seem clear that these models of participatory decision-making are effectively bringing us closer to the ideal of “good work” that we all seek to attain.

Víctor Millán is a freelance journalist in Valencia. He writes about the digital economy and the future of work for media such as elEconomista, Hipertextual and Xataka.