Displaced Kids With their mothers abroad, but their minds are on their fathers

On the Ukrainian-Slovak border on the second day of the war of aggression | Photo (detail): © Andrej Bán

One missile that hit the Ukrainian city of Kramatorsk in early April had the words “For the children” painted on it in Russian. That message has become a symbol of Russian aggression against the most helpless and vulnerable. But the support they receive in places like Slovakia can help individual children and a whole generation eventually put past trauma behind them.

The war is upending the lives of millions of Ukrainians, with no regard for anything, not even age. The children’s stories, whether they’re still stuck in war zones or have fled and had to leave their homes, schools, friends and toys behind, are stories of sad, lost childhoods as well as collective trauma and post-traumatic stress disorders that will mark an entire generation their whole lives long.

Unless they get the help they need.

“War has the greatest potential for trauma,” observes Jana Vyskočil. Jana is a psychologist who works with traumatized people. “There are studies showing that even the third generation after the Holocaust still show signs of post-traumatic stress disorders without having been through the Holocaust themselves.” But various factors can come into play, she adds, and children who’ve experienced war can recover.

If they get the help they need.

Parting with Their Fathers

According to UNICEF, in the very first month of the invasion, 4.3 million children had to leave their homes – that’s more than half of Ukraine’s underage population. It was one of the largest displacements of children since World War II, and it’s not over yet: UNICEF reported in June that about two-thirds of Ukraine’s children had been displaced within the country or abroad.

“Miraculously, my sister, her daughter and our mother managed to make it onto an evacuation train,” my neighbor wrote to me in March. She's been living in Barcelona ever since her village in the Donetsk region was occupied by pro-Russian separatists. “The men stayed behind,” she added. They said goodbye through the window as the train pulled away. I asked her whether her niece realized she might never see her father again. She didn’t know the answer to that one.

These goodbyes are very hard on the children. “Something that was connected is no longer physically connected,” Psychologist Jana Vyskočil explains. “Many of the children follow the news closely and keep in touch with their fathers, asking where they are, if they’re doing all right. The children want their fathers to be part of their lives. Many children I’ve worked with have fathers who are military commanders, and their minds are mostly on their fathers over there in Ukraine, not here, where they themselves are already safe.” 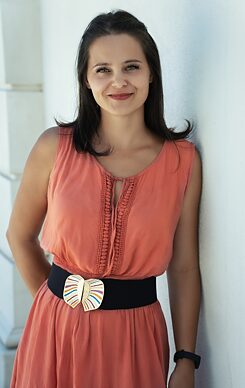 Psychologist Jana Vyskočil observes that, for many displaced Ukrainian kids: “Their minds are mostly on their fathers over there in Ukraine, not here, where they themselves are already safe.” | Photo: © Lucia Liščinská

They Feel the Parents’ Stress

According to Jana, children’s nervous systems are aligned with those of the adults around them, and they read their parents’ emotions in this situation, even if they don’t fully understand them. Simona Stískalová, the spokeswoman for the Slovak humanitarian organization Človek v ohrození (People in Need), has observed this phenomenon too: “Children copy their parents or the adults looking after them. If the adults can cope with the situation, the children won’t have any major hang-ups. But if the adults in question are under tremendous stress themselves and don’t have the resources to get back on an even keel, the stress will be reflected in the children as well.”

“Children process experiences through play,” Simona explains. “They play war games and the like in which they think up a better ending to the war, for example. It’s quite different with teenagers, however. They’re often connected on social media, and it helps if they form their own circles of friends. They look at satellite images of the places where they once lived and their houses once stood. They’re all looking for a way of their own to process difficult situations,” she adds.

Many of the children have spent days, weeks, if not whole months living in atrocious conditions in basements, underground bunkers or subway stations. Many have endured long, hard treks on foot with their mothers. But even if they’ve come by train or by car with a sandwich in their hands, that doesn’t lessen the incredible pain and anxiety they feel at the loss of their whole past lives. So the first thing they need upon arrival in Slovakia is to feel safe and secure.

They Need to Develop in a Normal Environment

Simona Stískalová tells us the story of a mother who came to Slovakia with two children: an infant and an 11-year-old son: “There were problems in the refugee hostel between her 11-year-old, who’s autistic, and the other kids there, who found him aggressive. They were afraid of him, they ran away from him and wouldn’t accept him in the group,” she recounts. “As the boy was exposed to a multitude of stimuli and stresses in that environment, which is quite normal in a refugee hostel or a children’s centre, he became restless and behaved aggressively.”

So a staffer at the NGO Človek v ohrození (People in Need) contacted another organization and a special school for autistic children. The boy was then put in the new school and took part in meetings and a rehabilitation programme. “This solution is a relief for everyone,” says Stískalová. “Later on, they also managed to get a private flat and leave the refugee hostel, which was very important too.”

A Friend to Show Them the Ropes

Understanding is the main thing. Children deal with difficult situations as variously as adults do. Simona goes on to tell me about a boy who refused to learn the Slovak language. “You have to work with the faculty at schools, too, to get them to try to see these kids [...] as children who have dreams and sometimes frantically cling to them,” she explains. 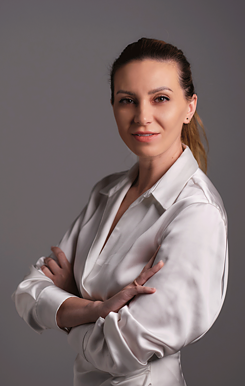 Simona Stískalová, spokeswoman for the NGO Človek v ohrození (People in Danger): “You have to understand the children’s loyalty to their relatives in Ukraine and to their country, even if there’s no war here” | Photo: © private

After all, some may feel that learning Slovak means giving up all hope of going home anytime soon, which Simona says can be unbearable for a child whose father is fighting on the front. Some kids might even see that as betraying their fathers.

Children from Ukraine need not only understanding, but also - like children everywhere else in the world - stability, security, family. A fixed abode and clear-cut rules. School, training, a “normal” everyday life and medical care. To that end, it helps a lot to have someone to show them how life works in Slovakia, says Simona.

But not all Ukrainian kids who come to Slovakia are traumatized, she points out, thanks above all to the help they’ve received here. So the future of Ukraine now depends in part on helpers in Slovakia and elsewhere, because these children are the nation’s future, and we can help them to at least come to grips as best they can with traumatic memories that they can’t forget, can’t erase from their minds – and to live the rest of their lives as fully as possible.


This text first appeared in the German-Czech-Slovak online magazine Jádu and can be read in full in those languages there.

Kristina Böhmer studied journalism and holds a PhD in political science. As a reporter based in Spain, she mainly covers Spanish-speaking countries, but her professional interest in conditions under extremist regimes and human rights abuses has also taken her to other parts of the world. She has a particular soft spot for Cuba.