Street Art Melbourne
The City is a Gallery 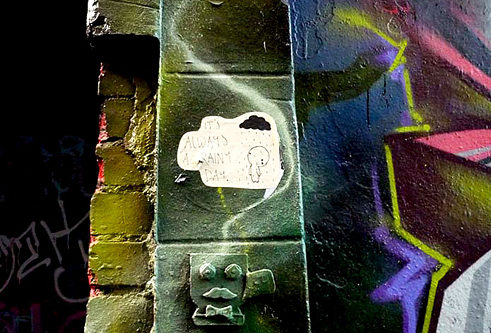 Larger-than-life murals, artfully decorated posters, spray-painted garbage cans – Melbourne is internationally known for its diverse street art. People from all over the world visit Australia's second-largest city to marvel at the artworks in the streets. The small laneways and side streets are an ideal playground for sprayers and painters. What used to be seen as vandalism has since developed into a recognized and popular art form; even the authorities are promoting street art.

Christopher Hancock, street artist and member of Blender Studios, takes us on a stroll through the city to show us some of the most significant artworks along with his personal favourites. 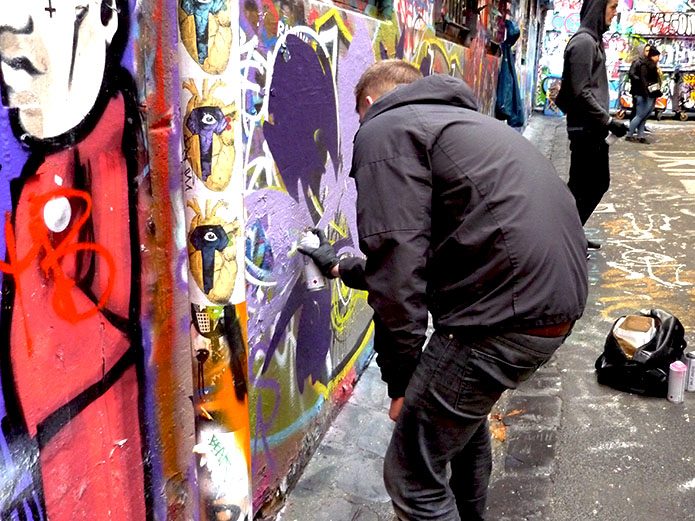 Street artist in Melbourne's famous Hosier Lane | © Christine Haas First port of call for many tourists: Hosier Lane, centrally located just a few metres from Federation Square. Hosier Lane is known as Melbourne's most famous street location. "This used to be the Hall of Fame of street art; this was where you would find the best of the best," Christopher Hancock explains. "But it's a legal painting area now. And that means anybody can put paint on the wall – and potentially destroy great artworks." 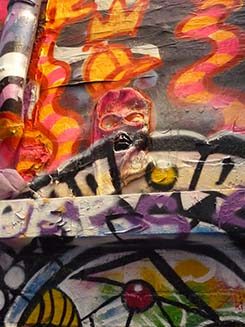 Balaclava by Will Coles | © Christine Haas A good way to create artworks that will last even if they are painted over is Installation Street Art, meaning that artists, rather than confining themselves to painting an image onto a flat surface, attach raised objects to it. A famous example is Will Coles who installed this balaclava at Hosier Lane. "It was painted over time and again – but it's still there," Christopher Hancock says. "It's one of my favourites."

Stencils are easier to execute and therefore widespread – like this typewriter. They are done by making a stencil from a piece of cardboard, holding it up against the wall and spraying colour over it. "It's a simple way to create the same artwork in many different spots, and by that stay on people's minds," Christopher Hancock explains. "In Australia, this idea is basically tens of thousands of years old. The Aborigines used to trace their handprints with red colour – and used this stencil to let others know that they'd been there."

The sheet of paper in the typewriter is a paste-up, a poster that has been attached with paste. "The advantage is that you can prepare the artwork at home," Christopher Hancock says. And: "If you get caught pasting, you'll only get a fine for littering and not for graffiti, which is punished much more harshly." 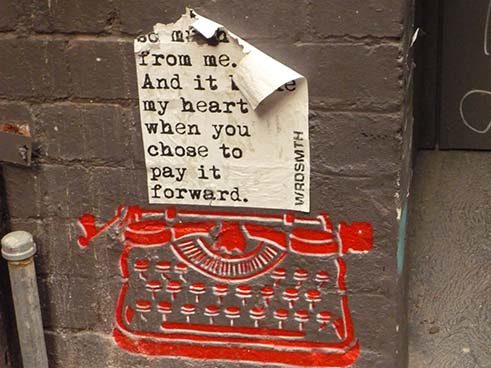 Typewriter | © Christine Haas Punishments for illegal graffiti are quite severe in Victoria: Painting "publicly visible or offensive graffiti on private property without the owner’s consent may be punished by up to two years prison and a maximum fine of 37,310 AUD," the government says. Many artists therefore develop ways to sidestep fines. Particularly clever: so-called Reverse Graffiti - like this image of an eye by British artist Moose. They are made by partially cleaning walls, for example by spraying them with a cleaning agent. "That's pretty ingenious. After all, it doesn't say anywhere in the law that cleaning is forbidden," Christopher Hancock says. "To many, it's a kind of rebellion. They want to annoy the authorities." 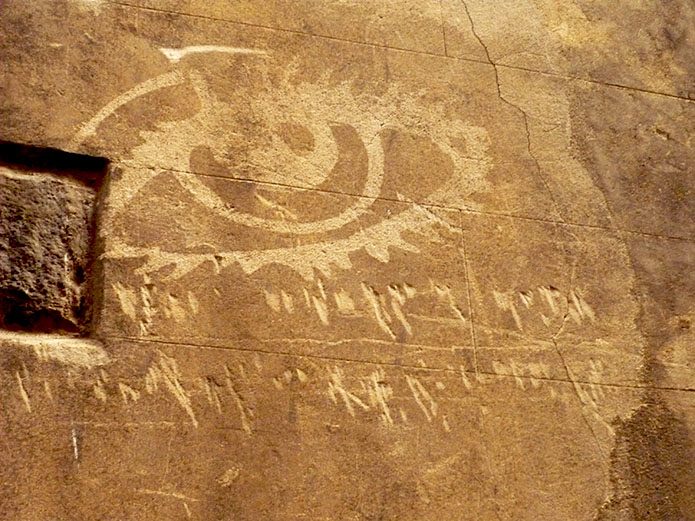 Reverse Graffiti by Moose | © Christine Haas Another way to avoid fines: Buying the buildings or surfaces you want to spray on. Straker from Perth has done that in ACDC Lane. "Every time he comes to Melbourne, he repaints these surfaces," Christopher Hancock says. "This Neon Glow Style is fascinating." 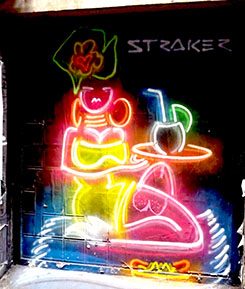 Neon Glow Style by Straker | © Christine Haas The same street features an artwork by Christopher Hancock himself: A woman with a cow's head who is nursing her baby (pictured below on the left). "Nursing in public was a big topic in the media. I was particularly upset by a video in which a guy in a business suit yells at a woman on the tram to stop nursing her baby," he says. "So it's ok to drink milk from a cup, milk that comes from a cow's tit. But he wants it to be illegal to feed a small child naturally? That is so backwards. I wanted to transport this criticism of our society."

Other artists focus on working with sizes. Fintan Magee from Brisbane created this larger-than-life portrait of a man carrying a tree (see image below on the right). 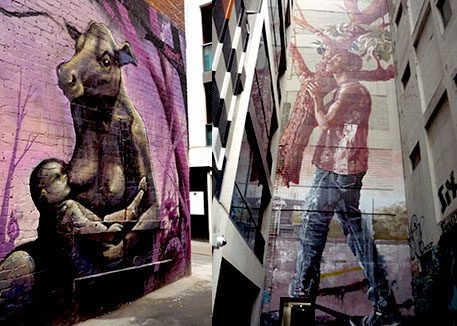 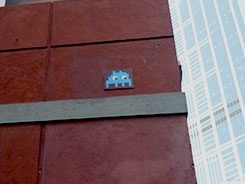 Mosaic by French artist Invader | © Christine Haas Much more inconspicuous, but no less famous is this mosaic by French artist Invader. "He has spent the last two decades leaving behind this form of street art all over the world. He has visited more cities and countries than any other artist," Christopher Hancock explains. The mosaics resemble the characters from the video game Space Invaders and have been affixed in inconspicuous spots in all big cities. "There's now even an app you can download, called FlashInvaders. Every time you see one of these mosaics, you can take a photo with the app and get points for it. It's like a scavenger hunt around the world: The goal is to find as many as you can."

Even more famous is British artist Banksy who made this stencil. "Banksy is the world's most famous street artist. He has made street art into what it is today." 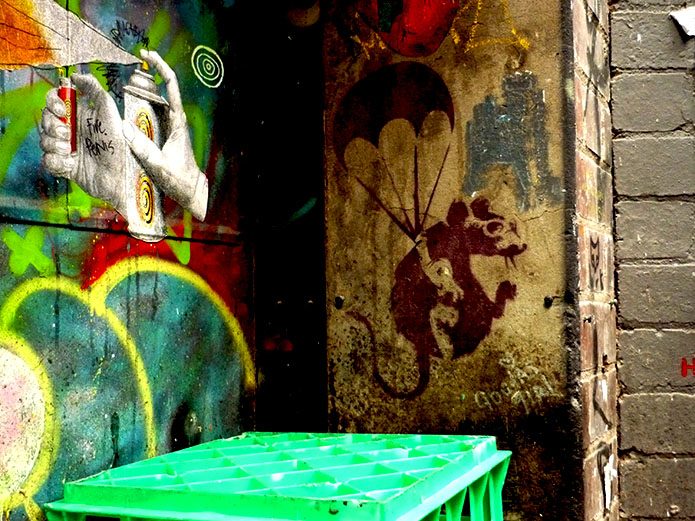 Stencil by Banksy | © Christine Haas Today's street art is characterised by a great deal of variety. Many artists work with perspective: "Anamorphic artworks are painted on a two-dimensional surface in a three-dimensional environment and take into account the viewer's perspective," Christopher Hancock explains. "From a specific vantage point, it really looks like this woman is floating." 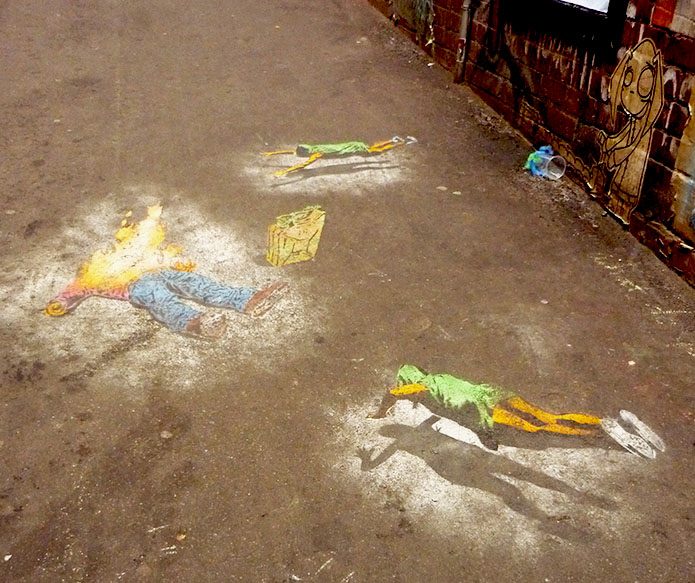 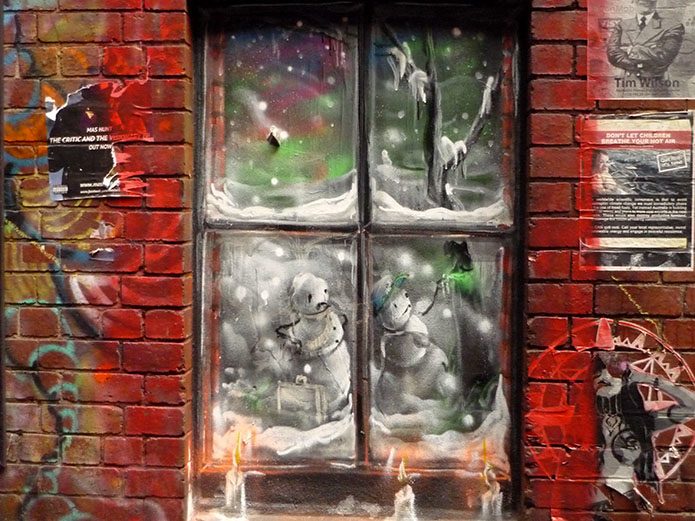 Window by Straker | © Christine Haas And another window (pictured below on the left): This paste-up was created by artist Baby Guerilla. "She stands out because of her technical ability. She's not just self-taught, she actually studied at university." 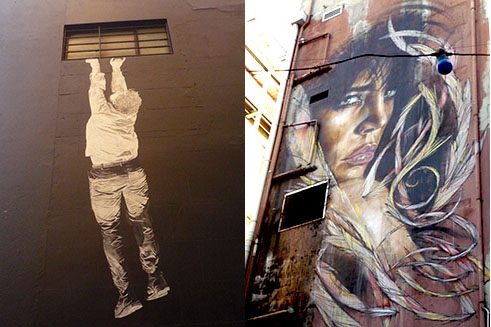 Paste-up by Baby Guerilla (left) and an illegal portrait of a woman | © Christine Haas You will frequently find portraits in the streets of Melbourne. This female face (pictured above on the right) was painted on a wall not far from cult container bar Section 8 – illegally. "But the owner of the building liked it, so it was allowed to remain there. That's another reason why street art is so successful in Melbourne: The majority of people here accept it. Many think: 'It may be illegal, but it makes the city more beautiful, so it's fine.'"

Another famous portrait: The Aboriginal Boy by Melbourne artist Adnate. "The boy's eyes are beautiful, they look so realistic," Christopher Hancock says. "Adnate has captured the physical properties of the eye perfectly: It looks wet and glossy, and it has a reflection."

Like Adnate, Rone is one of the most famous street artists in Melbourne. "His goal is to make walls beautiful that weren't beautiful before. His works are technically outstanding, he's a great craftsman." 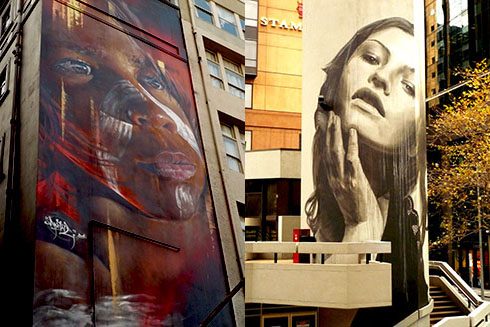 Graffiti-Art by Adnate (left) and Rone | © Christine Haas "Tom Civil is pretty much the opposite of Rone," Christopher Hancock says. "With his simple stick figures, he transports a positive message: No matter what gender we are, what religion, what culture: We are all human beings. There's a real concept behind his works. He's one of my favourite artists." 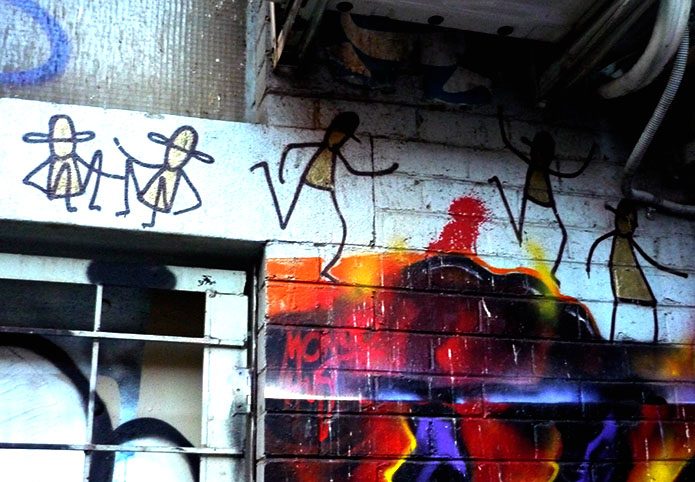 Christine Haas was an intern at the Goethe-Institut Australien's Internet department. For this article she went on a tour through Melbourne's famous Graffiti lanes.