May 12 marked the 100th anniversary of Joseph Beuys' birth. For the anniversary year, numerous events are taking place both in Germany and at the Goethe-Instituts abroad.
One of the central cooperation projects between the beuys2021 team and the Goethe-Institut is the podcast "The Earth is Speaking". In a critical analysis, different perspectives from Germany and abroad shed light on the relevance of Beuys today, his work and his impact on artists worldwide. 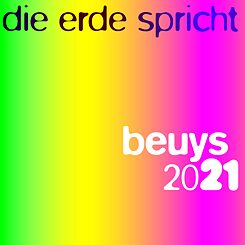 © Beuys2021 Ten episodes from Germany and fourteen episodes from abroad are available as from May 12 onwards at alternating intervals via the online platform beuys2021.de and all common podcast platforms.

How is Joseph Beuys being evaluated in the year 2021? How is his artistic and political legacy received in different cultural contexts? Does he play a role at all for today's generation of artists? These questions are addressed and answered in the various episodes of the podcast "The Earth is Speaking"; from a German and international perspective. 10 voices of well-known artists from Germany as well as activists, DJs, artists from 14 different countries worldwide address the person Beuys and especially his work and his artistic legacy.

The international episodes, for which the Goethe-Institut is responsible, are featuring amongst others experimental electro artist DJ Sniff from Tokyo, radio artist Juanita Fernandez from Montevideo, musicologist Andrew Stock from Chicago, artist collective Orta from Almaty, artist Luchezar Boyadjiev from Sofia and multimedia activist Sau Bin Yap from Kuala Lumpur. Thus resulting in a worldwide collection of personal stories, artistic audio performances and original sounds that form a polyphonic kaleidoscope, which tries to approach the person and the work of Joseph Beuys.

The production of the podcast is a cooperation between the team of beuys2021 under the curatorial direction of Catherine Nichols (for the German episodes) and the Goethe-Institut (for the international episodes). Further partner is the WDR.

From April to September 2021 the Goethe-Institut in Cyprus invited various Cypriot artists to a series of lectures, film screenings and gatherings. The title: Social Sculptures. With Joseph Beuys’s artistic practice as a starting point, the focus was on social and political problems that exist locally in Cyprus – and on the artistic practices of the participants in dealing with them. In this episode by the curator of the workshop Marina Christodoulidou and the musician Emiddio Vasquez you will experience moments, discussions and performative snapshots from the workshop series.

Start of podcast: Wednesday, May 12, 2021.
The international episodes will start on May 26, 2021.
Available on beuys2021.de, as well as on all common podcast platforms. A new episode will be released every week.

Back to "Social Sculptures: Beuys 100"