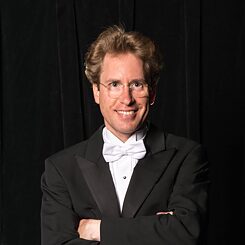 Jens Georg Bachmann’s career began at the Munich Philharmonic as assistant to James Levine, who soon commissioned him to set up the Verbier Festival Orchestra, conduct rehearsals and supervise it from 2002 to 2004. In addition to rehearsals for James Levine and guest conductors such as Zubin Mehta, Kurt Masur, Valery Gergiev, Esa-Pekka Salonen, Neeme and Paavo Järvi, Bachmann led the orchestra in concerts in Verbier and at EXPO 02.
From 2001 to 2003 Bachmann was also Principal Associate Conductor of the Fort Worth Symphony Orchestra. After that he took over the direction of the Texas Chamber Orchestra, a professional chamber orchestra in Dallas, for one year.
From 2004 to 2007 he was Assistant Conductor of the Boston Symphony Orchestra, which he repeatedly conducted in subscription concerts and at the Tanglewood Festival. At the Metropolitan Opera New York, Bachmann made his debut with “The Magic Flute” in the 2006/2007 season, followed by “Lucia di Lammermoor” and “Der Rosenkavalier”.
From 2007 to 2009 Bachmann was chief assistant to Christoph von Dohnányi with the NDR Symphony Orchestra (now NDR Elbphilharmonie Orchester), which he conducted in various public concert series and radio recordings.
From summer 2009 to 2012 Jens Georg Bachmann was the Music Director of the Crested Butte Music Festival in Colorado. In this capacity, he was responsible for planning and conducting the symphony concerts and master classes for the festival’s Singers Academy.
Bachmann is equally at home in opera and concert. In addition to conducting the Boston Symphony Orchestra, the NDR Elbphilarmonie Orchester Hamburg and the Metropolitan Opera New York, he has conducted, among others, the NDR Radiophilharmonie Hannover, the Royal Stockholm Philharmonic Orchestra, the Royal Swedish Opera (Le Nozze di Figaro”), the Gävle Symfoniorkester in Sweden, the ERT Radio-Symphony Orchestra of Athens, and has repeatedly conducted concerts with the Berliner Symphoniker, the Hamburger Symphoniker (whose first USA tour he led), the Konzerthausorchester Berlin, guest performances with the Düsseldorfer Symphoniker, the New Haven Symphony Orchestra and the Princeton Symphony Orchestra. He conducted “Swan Lake” at the Deutsche Oper am Rhein, “Werther” and “L’Elisir d’Amore” at the Nuremberg State Opera and “The Magic Flute” and “Der Freischütz” at the Stuttgart State Opera. At the age of 24 he made his debut at the Komische Oper in Berlin with a production of “La Vie Parisienne/Zwei Berliner in Paris”. At the Berlin State Opera Unter den Linden he conducted Richard Strauss’ late work, “Des Esels Schatten” in the Apollo Hall.
From 2011 to 2015 Bachmann was also a lecturer for orchestra and ensemble conducting at New York University (NYU) and at the Manhattan School of Music. In April 2012 he conducted the opening concerts of the annual Brahms Festival and seminars at the University of Music Lübeck. Since the 2015/2016 season, Bachman has held a teaching position for orchestral conducting at New York State University in Stony Brook, USA.

In addition to radio recordings, Jens Georg Bachmann has recorded for the DaCapo Records label and for Naxos.
Born in Berlin, he first studied conducting and violin at the local “Hans Eisler” Academy of Music before going on to study at the Juilliard School in New York.

Back to the interview