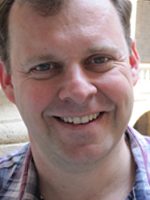 © Peter James Bowman Peter James Bowman was born in 1971 and studied both at Oxford and Cambridge, where he wrote his doctoral thesis about the German 19th Century writer, Theodor Fontane. In addition to teaching duties at Cambridge University, he wrote and had published a large number of journal articles on Fontane. Since 2002 Bowman has worked on his own research projects such as his recently published work The Fortune Hunter, about the Prussian landscape architect Hermann von Pückler-Muskau. His first published translation from German into English was On Tangled Paths, a translation of Fontane’s Irrungen, Wirrungen. P J Bowman lives in Ely, Cambridgeshire.

I completed a PhD on Theodor Fontane in 2000, and so when Antony Wood of Angel Books was looking to commission translations of two of Fontane's novels I was introduced to him as a potential translator of one of them. We eventually decided that I should tackle 'Irrungen, Wirrungen'.

My favourite German novel is Fontane's 'Der Stechlin'. It is his last novel and in a way a literary testament, with the author's philosophy expressed and exemplified by various characters. It is also, I think, the most perfect specimen of the famous 'Fontane tone'.
Translation Wish
Is there a particular book you would like to translate?

'Der Stechlin'! There is already an English translation of it, but to my mind it doesn't quite do justice to the original.