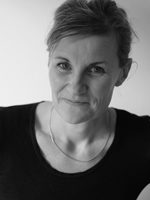 © Lucy Jones Lucy Jones is from Britain and has lived in Berlin since 1998. She studied German and Film with W. G. Sebald at UEA, and later did an MA in Applied Linguistics with the University of Surrey. She did several jobs before becoming a translator, including being a freelance fashion photographer. Returning to her roots in literature, in 2008 she founded Transfiction, a collective of translators in Berlin Wedding. She also writes book reviews (CULTurMAG ,Words Without Borders) and hosts a reading event series called The Fiction Canteen for writers and translators in Berlin.

Many moons ago, I studied German literature and translation and felt that I could work in that direction. I knew I wanted to do something vaguely connected to the arts – theatre, dance, literature, that kind of thing. I thought being a barwoman in Islington where Harold Pinter was a regular was a step in the right direction. But after studying, I had an urge to do something completely unconnected to books. My parents would have both liked to have been visual artists. They were both very talented. My dad had a darkroom at home and spent years doing his own developing and printing. This made me decide to try it out too and so I set up a darkroom in my flat in Hamburg and set out to be a fashion and reportage photographer. I liked going out of the house and being sociable as a photographer. That changed when I had my daughter. Suddenly I was spending more time at home and reading. So literary translation was a kind of homecoming. I haven’t followed any of the usual paths. And I still love photography.
Favourite Book
Which German book do you like the best and why?

I am very interested in authentic voices, ones that capture you from the first page on and then you just devour the story. It’s the best form of escapism. Unfortunately, we didn’t read many of those kinds of books when I was studying German. Some of the literature we were given to read was very cerebral and hard to access. That changed when we got to Kafka. He was exciting and remains one of my favourite German-language authors. I love the physical discomfort he conveys in words: discomfort with being in your own skin, with your own family, with your own home. I can relate to all of that. Amerika is still one of my favourite novels.
Translation Wish
Is there a particular book you would like to translate?

Talking of authentic voices, I recently translated a sample of Ellbogen by Fatma Aydemir, which is very immediate. The novel is about an 18-year-old Turkish-German girl in Wedding who feels stifled by her family’s traditional values. Via a dating platform, she ends up getting involved in a shady character in Istanbul and life suddenly gets interesting. It would be so much fun to translate.
Selection of translated titles

Back to "Translators D-L"