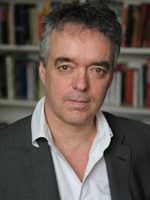 © Shaun Whiteside Originally from Northern Ireland, Shaun Whiteside graduated with a First in Modern Languages from King's College, Cambridge, and translates from German, French, Italian and Dutch, having previously worked as a business journalist and television producer.

His translations from German include works by Freud, Schnitzler, Musil and Nietzsche, and, most recently, My Father's Country by Wibke Bruhns (2009), The Weekend by Bernhard Schlink (2011) and Sorry by Zoran Drvenkar (2011). His translation of Magdalena the Sinner by Lilian Faschinger won the 1996 Schlegel-Tieck Award.

He is a former Chair of the Translators Association, and lives in London with his wife and son.

Did I always want to be a translator? I certainly wanted to do something that involved travel and languages, but even when my work in television took me to far-off places, I kept coming back to translation, first for fun, and eventually as a way of earning a living.
Favourite Book
Which German book do you like the best and why?

If we mean books in the German language, then I think it would be something by Thomas Bernhard, perhaps Holzfaellen or Wittgensteins Neffe. If you mean German German I'd probably go back to Kleist's collected works, dark, and funny, and strange, or to Rilke's poems.
Translation Wish
Is there a particular book you would like to translate?

As a matter of fact there is a book I'd like to translate - I'd really like to have a go at Uwe Tellkamp's Der Turm, a massive great project but a worthwhile one.
Selection of translated titles