Mandy Wight was the winner of the Goethe-Institut Award for New Translation 2018. In this interview she tells us what sets apart a good translation.

Congratulations on winning the Goethe-Institut Award for New Translation!  What, in your view, are the most important elements of a good translation?

The most important thing is to convey as far as possible the writer’s voice in another language - that will include the narrator’s voice as well as the voice of the characters. Through the voice comes the emotion of the text and the reader of the translated text should be engaged, moved or made to laugh in the same way as the reader of the original. At the same time the translation should try to reflect the style of the original text in its use of imagery or sentence rhythm for example, to pay attention to the author’s use of language in the original. Of course a translator must often strike a balance between rendering the original faithfully and producing a translation which is accessible and enjoyable for readers of the translation.

The passage chosen for the translation competition was from Juli Zeh’s Unterleuten (2016).  Was there anything you found particularly challenging or remarkable about this text?

The passage chosen was from the point of view of a 60-year-old businessman called Meiler and one challenge was to convey his voice in English, to find the words that a 60-year-old man might use to express the range of emotions he feels in this passage: embarrassment, surprise, shame, anger and the unfamiliar feeling of finding himself upstaged.

Which German authors would you regard as being your current favourites?

My favourite authors are Jenny Erpenbeck, who has been translated into English, and Judith Hermann - especially her short stories. I greatly admire the work of Ursula Krechel, especially her novels Landgericht and Shanghai fern von wo. I have fairly recently discovered Ralf Rothmann and loved both his novel Junges Licht and his most recent book Im Frühling Sterben.

You publish a blog called Peak Reads.  Could you tell us about the blog and who it’s for?

I started writing the blog as a way of reviewing books to share with friends and family: books written in English, German and Spanish but also in translation. The idea at the time was to persuade more people to read translated fiction and I can say that some friends who read my blog have suggested books in translation to their book groups who have gone on to read them. I also occasionally receive comments on blog posts which start a conversation about an author, perhaps with more recommendations which I find very helpful. I review recently-published books in German and publicise the reviews via Twitter with the intention of spreading the word to readers of German. But more generally the blog is my way of telling people about great and important books which I have enjoyed! 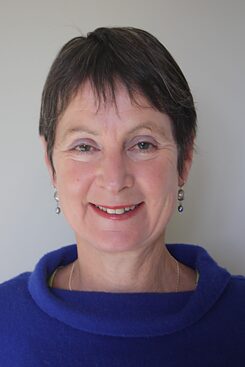 Mandy Wight was born in Bangor, Wales and brought up in Reading and then York. After living and working as a solicitor in London for ten years, she moved back to Sheffield in 1986 where she re-trained as a teacher and brought up her family. She now lives in the Hope Valley, Derbyshire.

She came to translation through being a linguist and a reader in German and French, as well as English. She had put translation on hold until she left her last teaching post in 2014 and went to seminars at the Literary Translation Centre at the London Book Fair and attended a City of London Translate in the City course where she won the German translation competition organised by the publisher And Other Stories. She is a reader for the magazine New Books in German and for a German reading group in Sheffield and participates in 2 English book groups. Her blog on books, including German books, is called Peak Reads and she is particularly interested in women's writing.