What does Europe mean to us, and what should it mean? In the project “Tell Me about Europe” people from different generations discuss these questions. Project manager Katrin Sohns from the Goethe-Institut London talks about the search for common ground and music's unifying power.

Ms Sohns, since the beginning of September the European branches of the Goethe-Institut have been inviting people from different generations to discuss the idea of Europe. Why do we need this intergenerational dialogue?

We’re seeing divisions or small fractures emerging in many places across Europe. It seems as if Europeans are drifting apart from each other once again. For many people, this makes it all the more important to look for what connects us. What is Europe? What binds us together? How do people of different ages see Europe, and how can we bring these perspectives together? Here particularly in the UK since the referendum, many young people feel that their generation has a responsibility to do something for Europe. And their peers elsewhere have similar concerns. Two years ago, we came across a network of young people from all over Europe called Arbeit an Europa, which translates as “Work on Europe”. We thought their idea was wonderful – young Europeans interview people who were born between 1920 and 1945 about their lives and experiences.


The group has now interviewed fifty people, many of whom are well known.

People such as the French screenwriter Jean-Claude Carrière (born in 1931), who talks about hostile attitudes towards the Germans after the war. Or the Slovak philosopher Egon Gál (born in 1940), who narrates Slovakia’s unsteady path to EU membership, torn between euphoria and misgivings. Even the former Icelandic President Vigdís Finnbogadóttir (born in 1930) took part. She was the first woman to be elected head of state anywhere in the world.

Fifteen interviews with people who lived through the 1900s are now available online in the European Archive of Voices ...

... and visitors to the site will discover just how wonderfully diverse and colourful Europe is, but also what a complicated and chequered history it has, shaped by wars, conflicts and the redrawing of borders. These events have marked people in ways that are clear even now in the interviewers’ conversations with them. The archive constitutes a sort of collective memory for Europe, which is what compelled us to create a project out of it during Germany’s Presidency of the Council of the EU. Our project is called “Tell Me about Europe”. It brings together young people to discuss Europe with artists, writers and journalists at 13 different locations. The archive material is used to spark conversation, and some of the interviewees attend the events themselves. Unfortunately that hasn’t been possible in every case due to the pandemic.


The discussions revolve around seven broad topics. How did you choose these?

When our curators Edouard Barthen and Leona Lynen were looking through the material, they noticed that certain topics came up in all of the interviews: the search for identity, living between different cultures, the Europe of nations, Europe between East and West, and multigenerational Europe. Other subjects that stood out were migration, the struggle to establish a European public area, and the question of what Europe actually means in people’s daily lives.


Events are being held in 13 countries, including some outside of the EU. Moscow and the Georgian capital Tbilisi are both on the list.

That’s right – we interpreted Europe primarily as a cultural community rather than just a political entity. We wanted our perspective to be as diverse as possible. We reached out to all of the European branches of the Goethe-Institut to ask who was interested in taking part and who felt that the topic chosen was relevant for their location. The result was an exciting mix: Places such as Zagreb, Sarajevo and Tirana joined capitals many times their size including London and Rome. And each one chose their own unique approach.

An evening discussion beneath trees: Tell Me about Europe in Tirana, Albania | © Goethe-Institut
For example?

In Tirana, Tell Me about Europe focused on Maks Velo, who sadly passed away shortly after giving his interview for the Archive of Voices. He was a great Albanian painter. Honouring his life by engaging with his perspective on Europe was incredibly important to the people there. In Sarajevo there was an international café where young people and women from different generations held heated debates on belonging, religion, feminism and the EU. They went from table to table and wrote down their thoughts on paper tablecloths for other people to read and discuss. In Prague, the writer Alena Wagnerová, who lived through the Second World War and the tumultuous decades that followed, talked with young people about her life and her experiences in Europe.


If you look back on the events that have taken place so far, what is it that connects the people of Europe?

Definitely their curiosity about one another and, in fact, their very desire to constantly explore and discuss what they have in common. The search for common ground between the different regions and generations played a major role in all of the discussions, even if there were no easy answers to be found. In Oslo, the event was held as a concert and debate in a jazz club. A firsthand witness of the 20th century’s upheavals was present there, too. The great Norwegian jazz singer Karen Krog talked about her life during the war and the years that followed. She focused on Norway’s mixed feelings about the EU, which of course the country doesn’t belong to – it keeps its distance and yet the two are intertwined. Even the music played that evening showed just how transnational and connected this Europe is. 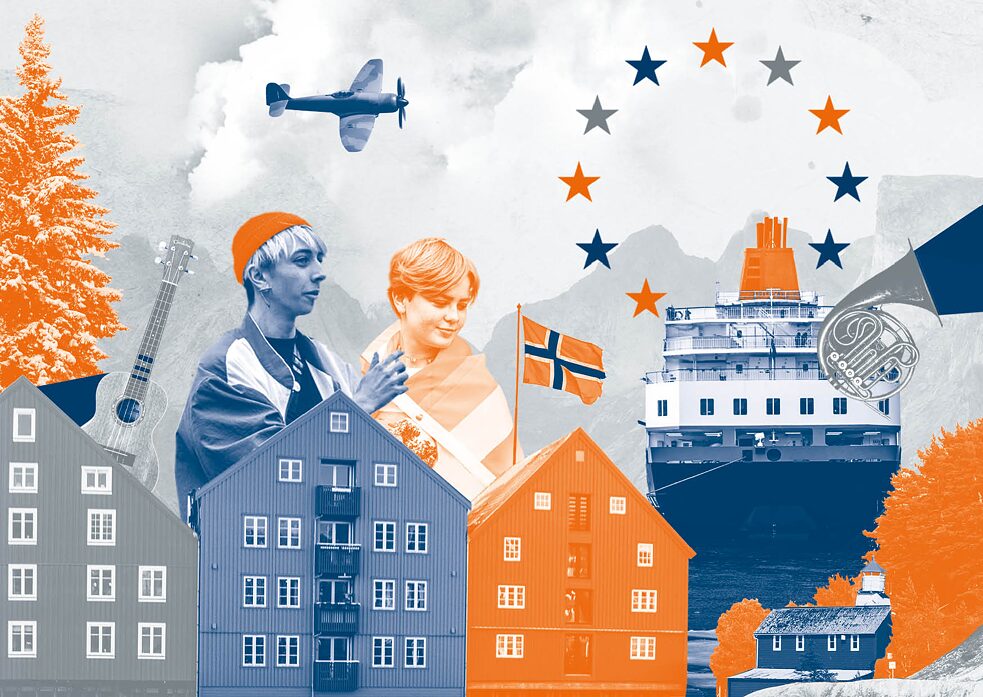 Postcard for Tell me about Europe in Oslo | © Goethe-Institut Are there significant differences between the generations?

What stood out to me was their deep respect for one another and their fascination with the other side’s stories. Of course, there are differences. In Helsinki, for example, older people’s image of Europe was shaped by war and deprivation, and many of them have not yet absorbed the idea of Finland joining the EU – which happened in 1995. For the younger generation, on the other hand, that’s a non-issue. They simply take it for granted. And the same goes for our freedom of movement within Europe. Young people are more concerned with fighting for equal opportunities and against racism. They want to see inclusive societies which are able to absorb migration. The old and new generations have a remarkably unanimous view of what’s needed in the future – an inclusive Europe that offers equal opportunities for all.


Tell Me about Europe also draws on sound collages. How did that come about?

The Archive of Voices is an audio and text archive. The authors chose not to use video so as not to take away from the impact of the voices. We were fascinated by that approach. It’s a very intense experience to concentrate on listening alone. So we wanted to take that as the basis for an artwork. The sound artist Marc Matter used the interviews to create a sound installation that was adapted to each individual event location. He took snippets of text and wove them into a tapestry of voices and sound. It’s colourful, multilingual, almost Dadaist. The sound collage can be heard at the events. It’s a wonderful display of the wealth of different voices within Europe. 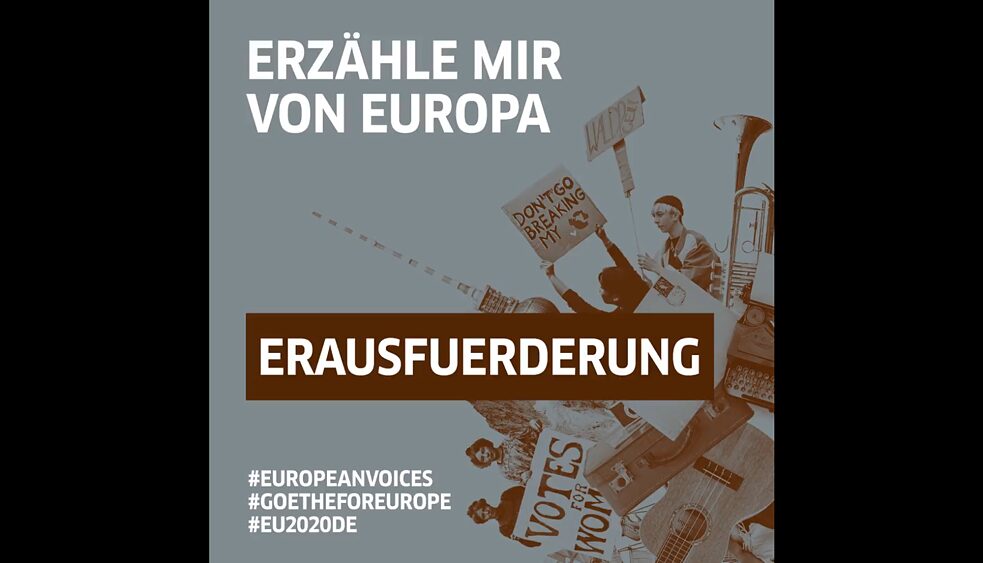 © Goethe-Institut
The composer Michael Langemann is now weaving the voices of Europe into a vocal composition.

It’s called Stimmen: Europa, or “Voices: Europe”. He’s concentrating on passages from the interviews which talk about the future of Europe. What he’s creating is a sort of oratorio. It will be sung at the different locations by amateur choirs. Of course, it’s difficult to work with choirs now because of COVID‑19. So Mr Langemann has broken his composition down into modular blocks. The different voices can sing alone or together, indoors or outdoors. A film team will record the performances and digitally combine them into a complete version which will be available to watch and listen to next year. The pandemic has unleashed a great deal of creativity. It’s exciting to see what emerges when artists have to find new approaches to their work.


The next Tell Me about Europe series will have to be held entirely online.

They’re sure to be exciting nonetheless. One event will be held via the radio station Echo of Moscow, and in Strasbourg there will be a Zoom conference with recordings of Marc Matter’s sound collage. In Tbilisi, Tell Me about Europe will combine digital debate with film clips of the city in 2020. In early December, we will bring Tell Me about Europe back to London. That will be an exciting time – just before the UK leaves the European Union for good.