This page offers examples of best practice with the aim to inspire. These are schools that, without outside financial support or without being part of a wider initiative, have taken on the struggle to keep up, reintroduce or, in some cases, to even introduce German for the first time. It is the active commitment of the German teachers, sometimes also their language departments and even their head teachers, we would like to bring to the attention of the wider world of education and beyond.These examples of best practice will be featured here on a regular basis and we would hope that many schools will apply to us to be represented on this webpage. So, we are looking forward to highlight as much of the good work done for German teaching and learning around the UK as possible.

Do you want to share your school’s project or achievement with us? Please email us:
teacher-services-london@goethe.de

Get inspired and take a look what other schools organised to get their pupils enthusiastic about German and make a case for the language at their schools:

German Board Game Challenge, Warwick School
On 30 April Warwick School for boys held a German board game competition. In order to raise interest in German at their school, Lindsay Slack, Head of Modern Foreign Languages, and her colleague Sarah Brennan set all Year 9 classes the challenge of creating a board game which would test their knowledge of the German perfect tense. Before the competition the boys had learnt the perfect tense as part of the usual curriculum. At the beginning of March they were given a brief which explained the task. In groups of three to four they were to design a game - either completely new or based on a game they were familiar with. They had to produce the board, counters, questions on the perfect tense, an explanation of how to form the perfect tense, and a set of rules in English on how to play the game. The board game brief provided a definitive list of verbs that could be used. This list comprised verbs the teachers felt that the boys ought to know and be able to use by the end of the year. Help was given from subject teachers as to types of game that could work. Questions were posed on a range of areas - from questions in English on elements of the grammar behind the perfect tense, to simple translation tasks and multiple-choice answers or ‘spot the mistake’. The boys also had to provide answers to all their questions.
Following approximately 4 lessons plus homework, and the Easter holiday, the games were submitted and tested in one lesson to check they worked. The play-off was held a week later, and representatives of the Goethe-Institut were invited to attend as judges. A fantastic range of creative board games including a Berlin Wall construction, a space rocket and even electrically lit circuits were presented in an excellent way by the students to the impressed jury. The boys played their own games for 10 minutes and staff and judges circulated amongst them, asking questions. Then the boys played a different game so that the playability of the game could be established. In the end the proud winners with the most innovative final product were announced and awarded with the Modern Language Cup, medals, certificates and media vouchers.
The challenge was a resounding success not just in terms of encouraging the students’ creativity but also in relation to raising the popularity of German. Next year, the MFL Department of Warwick School hopes to take the initiative to a wider audience of schools and have a regional or even a national playoff.
German Magazine, Solihull School
Pupils of the Solihull School had a great idea and created their very own German magazine Das Alles ist Deutschland. The first issue was an end of term project for year twelve. The magazine features a variety of topics like Why Learn German, geography, politics, sports, arts, music, food and fun homework. In the meantime a second issue came out that featured contributions from students from year eight to year thirteen.The contributors are very proud of their magazine which is not only showcased on the school’s website but is also available in their library as well as being exhibited at parents’ evenings. The aim was to provide younger pupils with information on German culture and show them what can be achieved when putting effort into your German classes. And this worked out really well: a positive effect on the younger pupils could already been observed – they now want their own German magazine!

Please click here to view the German Magazine by Solihull School.
A German Murder, King's High Warwick
In the summer term 2013, 12 year 10 students of King’s High Warwick took part in a creative writing project. They received the brief three weeks before the end of term and then worked in pairs in order to find a credible solution to a murder mystery. The brief consisted of a synopsis on a murder somewhere in Germany and outlined the number of suspects. Initially, every member of the class had to describe a particular person in order to engage in the process. They were then paired off and advised how to proceed. The pupils enjoyed the task a lot and had very creative ideas how to solve the murder case.

If you want to give this project a go with your own class, please find inspiration and materials below:

Instructions - A Case for Inspector Stutzig

German speakers at King’s Girls’ Division staged Goldlöckchen, a German version of the medieval parable of Goldilocks, but with a singular difference, there were four bears not three. The vital addition meant all those girls wanting to participate had a challenging role to test their German speaking skills with the play also including references to ‘dee Wolperdinger’ a mythical monster in German folklore.

The girls had been preparing their play since September but as King’s Head of German Jessica Houghton said: “The maxim of ‘having fun while learning’ is paramount. Our pupils really enjoy the opportunities available to them in the German Department, such as the Märchentheater Club, as this allows them a meaningful context to use their language skills, while having a hoot.”

Mrs Houghton added: “German ‘es ist lustig!’ or to translate ‘it is fun.’ It combines well with all subjects at GCSE and A Level. At university level there are a vast array of degree courses combining German with other disciplines, such as Science and Medicine, Engineering, Law, Business, History and, of course, other languages. German is highly regarded by universities; it is a facilitating subject and having German skills makes you a very employable graduate, particularly in areas such as scientific research, electronics, aerospace, computing, law, export/import and tourism.”

She added: “German is thriving at King’s, even if since the Government announced its decision to stop the compulsory learning of languages in state schools, many German departments nationwide have closed."

She continued: “This means in ten years’ time, young people with qualifications in German will have become very rare indeed. The British Council noted in their ‘Languages for the Future’ report that 45% of UK businesses rate German as the most sought-after language in employees, yet only 6% of the UK adult population possesses a working level of the language. This will surely give our pupils with German a distinct advantage in the future.”

King’s Girls Division German student Helen Nixon, 16, from Tytherington said: “It’s been an exciting process and has taught so much about communicating the language and not just reciting it.”

Watch a video of the performance here.

In his opinion the following points argue for fairy tale plays in German lessons: Among pupils it promotes team work, enthusiasm, confidence, public success and the joy of performing. Advantages for teachers are that the whole class gets involved. Learning new vocabulary becomes so easy that pupils only experience it as a positive side effect. Theatre performances can spark a passion for the foreign language and will be remembered. Even when A-Level (in Scotland Highers and Advanced Highers) and GCSE results are long forgotten, most pupils will still treasure their theatre performances at school.

What an important role chanting, singing and dancing can play in German lessons is illustrated in this short version of Goldlöckchen at the High School of Dundee.
Intertextuality and German Poetry, Hillingdon Primary School 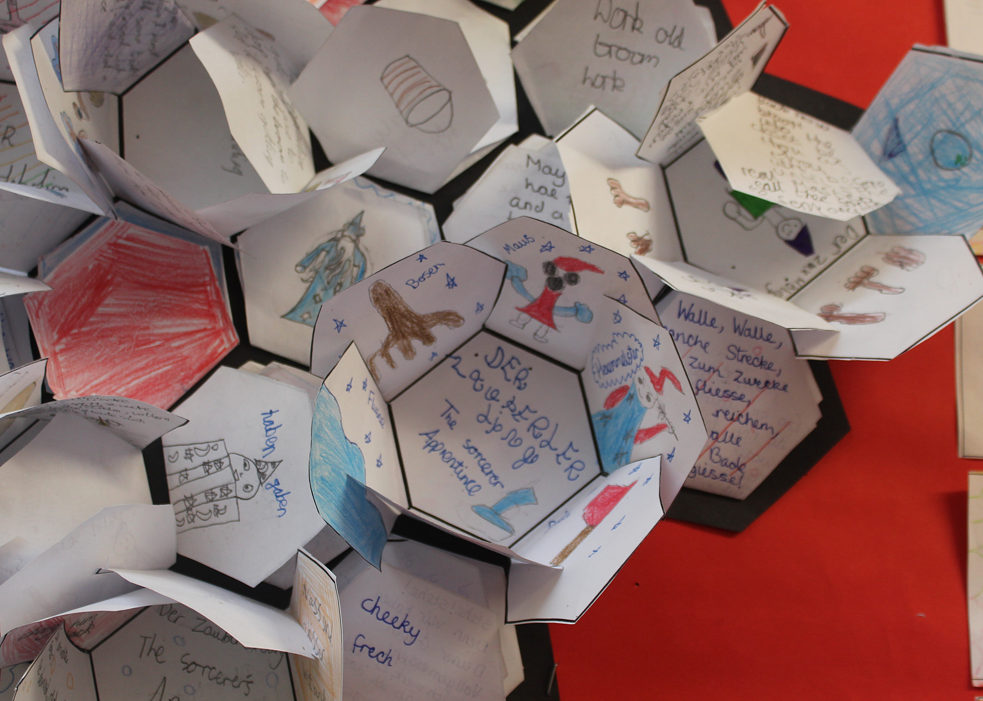 © Marian Devons
A famous proverb says: „Pride comes before a fall“. That is what happens in Goethe’s poem “Der Zauberlehrling” which formed the basis for a lot of creative and interactive German lessons of years 3-6 at Hillingdon Primary School. The classes used a variety of creative methods to engage with the content of the poem. Year 3 listened to a German rap version of the poem and wrote down their thoughts and ideas about it. Afterwards the poem was read to them and the film “Fantasia” with the score of Paul Dukas was shown to them. The film’s story is similar to “Der Zauberlehrling”. In the end the pupils looked up the nouns of the poem in a dictionary. Year 4 watched “Fantasia”, listened to the rap and wrote down simple sentences in speech bubbles describing the content of the film. Year 5 watched the film, listened to the rap and to the poem which was read out to them. In 3x45 minutes the pupils looked for rhyme patterns, looked up nouns in dictionaries, copied sentences in German and English and illustrated their favourite scenes of the poem. Year 6 worked with the poem and changed it into a rap song which was performed by the pupils. The pupils enthusiastically performed the song and others joined singing at the chorus.

Back to German for Young People