Women’s movement in Germany
Between equality and special character 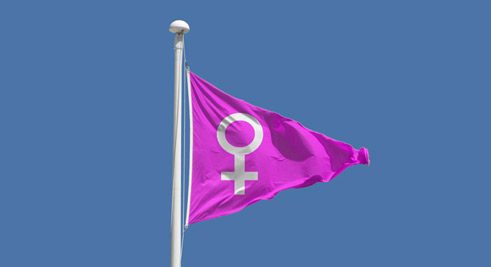 German feminists have been divided into two camps for a long time. Can a new generation bridge the gap?

A few years ago you might still have called after German feminism: “Rest in peace!” The women’s movement of the 1900s and the 2000s was a good as dead and feminism a “non-word”. Universities seminars in gender history were cancelled for lack of demand. Women students declared they would never call themselves feminists; the word had an “embarrassing aftertaste”. Now the auditoriums are again full, and with men as well as women. They are driven not only by the thirst for knowledge; you feel in them above all the desire to take a stand for gender equality. There they are, it seems, a new generation at the start, waiting for answers.

But how do the feminist answers to fundamental questions in Germany look today? The biggest role in public discourse is still played by “sexual politics”, questions of sexual identity and self-determination. And this not only since New Year’s Eve 2015, when in Cologne and other cities women were subjected to mass molestation. The subsequently initiated Twitter campaign #ausnahmslos (i.e. #no excuses) was a re-issue of the campaign #aufschrei (i.e. #outcry) of 2013. The initiators called for better protection of sexual self-determination and for more preventive measures.

Violence and sexual morality as the dominant issues

The demands, including those for a tighter law governing sexual offences, repeat almost word for word concerns of the so-called “second women’s movement” of the 1970s. Then as now German women protest apparently above all when it is a matter of sexual morality and violence. Issues beyond pornography, prostitution and rape, with opportunities for realization in politics, business, science and art leading the way, have comparatively little potential to create a commotion. And this even though Germany regularly lands in one of the last places in comparisons of gender equality in Western countries.

To explain this peculiarity of German feminism a look back at the history of the movement is helpful. It is rooted in the Enlightenment and human rights debates of the late eighteenth century. Back then women proponents of the Enlightenment applied the general demands for equality to the situation of women. At the same time, bourgeois industrial society was caught up in a development that made demands on the performance and capacity for integration of each individual, bringing with it the expansion of general education and the call for the participation of women.

The question of the appropriate strategy

In this historical constellation emerged a problem that is still today part of Western modernity: the division of life into two spheres, into private and public, feeling and reason, difference and equality. These complementary spheres became specific within the gender system: women were responsible for the inner, the private, for feeling; men for the outer, the public, for reason. For feminists the question arose as to which strategy was more appropriate: emphasis on the promise of equality or on the polar gender characters.

The “first women’s movement” of the nineteenth and early twentieth century stressed the female character and sought access to the public realm through “typically feminine” professions in care and support. The “second women’s movement” after 1968, the year of upheaval and protest, was more successful championing the universalist principle. With Alice Schwarzer, still today the dominant figure of the movement in Germany, the faction which focused on equality and the Enlightenment prevailed.

One possible explanation of the emphasis on sexual identity as the intersection between “difference feminists” and “equality feminists” is that it is the issue that still mediates between the unreconciled camps. The fight against sexual violence has become a sort of lowest common denominator. A further reason for the stress on “sexual politics” is that in Germany there exists a tremendous fear of sexual violence. This may be a legacy of the mass rape that occurred at the end of the Second World War, which still has not been adequately come to terms with down to the present day. With the immigration of hundreds of thousands of men from other cultures, the repressed has reported back. The sexual threat even works as a link connecting nationalist, xenophobic and feminist positions.

Programmatic diversity is called for

Because of the development of the debate and personal continuities, the pioneer spirit of feminism has lived outside Germany since 1945. The United States had Betty Friedan, France Simone de Beauvoir. While the German 68ers imported the concept of sexism and the theory of patriarchy, they lost touch with the theoretical development.

The new scene, which is networked and manifests itself not least through the internet, currently has no formative figure. Needed are women and men who not only shine in the media but also represent a programmatic diversity – so that young people can communicate on the basis of more than the minimum consensus of “sexual politics”. The German women’s movement will really get started again only once it discusses its image of humanity and its historical heritage.

Als die Soldaten kamen. Die Vergewaltigung deutscher Frauen am Ende des Zweiten Weltkriegs (i.e. When the Soldiers Came. The Rape of German Women at the End of the World War II) is the title of a book by Miriam Gebhardt. Based on many new sources, she substantiates for the first time the magnitude of violence at the end of the war and during the occupation.

Miriam Gebhardt is a historian, journalist and professor at the University of Constance.