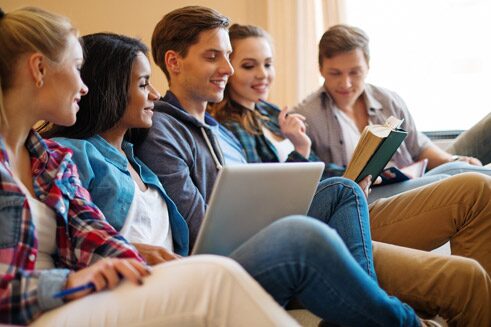 Only six of ten foreign students leave Germany universities with a degree. For many, dealing with different learning cultures is difficult. How can they prepare themselves for studying in Germany?

What distinguishes a seminar from a tutorial? What makes for good academic argumentation? What rules must be heeded in quoting and compiling a bibliography? Those who come to study at a German university must first learn the basic skills of scientific and scholarly work. This applies to foreign and German students alike. But the former often bring with them from their home countries an idea of good academic work that fails to coincide with that of German university teachers.

What is good science?

“The term ‘science’”, explains Jürgen Bolten, Professor of Intercultural Business Communication at the University of Jena, “derives from the Indo-European root word ‘skei-‘, which means ‘cut, separate’. To our minds, modern science seeks to differentiate and identify details. For many foreign students, this approach is hard to understand. In other parts of the world, the focus of schools and universities is on holistic thinking rather than analysis”. Yvonne A. Henze conducts inter-cultural competence training for students at the University of Göttingen. She provides an illustration: “Chinese students often assume that, once they have learned something by rote, these ideas are their intellectual property and may therefore be used without citing a source. This approach is based on a different learning culture, in which reproducing learning plays a more important role”.

Then too, says Henze, German high-school graduates are familiar with interactive forms of teaching like group work and role-playing from school. They know that critical inquiry and active participation in classes is expected of them. “Many foreign students, on the other hand, find it disrespectful when students disagree with their professors or fellow students.”

As part of their strategy of internationalization, German universities are striving to develop a more enlightened approach to different learning cultures: for example, prior to enrolment, during the introductory phase of study or as an accompaniment to study, they offer appropriate training or organize learning support and counselling by peer tutors. As part of its Teaching Quality Pact, the Federal Ministry of Education and Research (BMBF) funds projects at universities, some of which focus on international students. And the Nexus programme of the German Rectors’ Conference focuses on designing the introductory phase of study.

Foreign students who have come in touch early on in their home countries with German learning cultures have advantages: these students include the graduates of the so-called PASCH schools. Here work teachers who have been trained in Germany or taken part in advanced training at Goethe-Instituts or the Central Agency for German Schools Abroad.

There are already efforts afoot to introduce a wider group of foreign students in their home countries to dealing with different learning cultures. For instance, the Goethe-Institut’s nascent programme “Study Bridges” prepares ninth grade Eastern European and Central Asian schoolchildren linguistically and inter-culturally for study in Germany, with awareness of different learning and academic cultures playing an important role.

Finally, in 2014 the worldwide university network for intercultural learning, Intercultural Campus, developed a series of lectures on “academic styles”, which was held at eight universities in five countries and made available online to all students. “The teachers represent different national and disciplinary cultures. Their different methods of approaching a subject already show the differences in academic cultures”, explains Bolten, who developed Intercultural Campus to carry out cross-border projects with students.

The goal of the various projects is to make schoolchildren and students aware that there are various learning cultures and that their diversity can be an enrichment. “To this end, you have to know why things are done and how they’re done. The ability to skim, for example, is important at German universities because the reading workload is very heavy. And you have to be able to hold presentations at university because in many professional fields you’ll also often have to speak freely to larger groups of people”, explains Henze. Ideally, German university teachers should also try to understand the learning cultures of their students and so question their own principles. They may then see that, when inter-cultural teams work well together, they can develop better solutions.

Janna Degener works as a freelance journalist based in Königs Wusterhausen near Berlin.