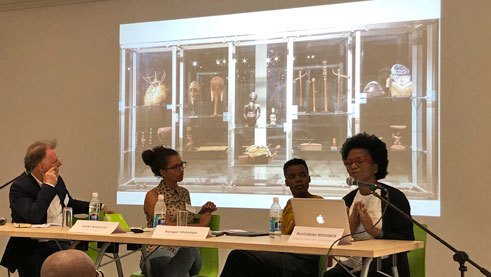 The symposium Patrimoine matériel, immatériel et altérité took place on 30 and 31 March in the Musée des Civilisations Noires. It was organised by Felwine Sarr, Bénédicte Samson and Massamba Lba Guèye in collaboration with the Goethe-Institut Senegal. The event in Windhoek was organised by the Goethe-Institut Namibia, the European Center for Constitutional and Human Rights (ECCHR) and the Akademie der Künste Berlin. It was also the prelude to a Week of Justice, which continued with the International Law in Postcolonial Contexts conference and other public events in Swakopmund.