Gigantic and bursting with vivid colour: artist Katharina Gross inside her “It Wasn’t Us” piece. | Photo (detail): © picture alliance/dpa/Jörg Carstensen

Katharina Grosse is fascinated by how colour can transform places and materials: her gigantic spray gun artworks have taken her to the world’s largest exhibition halls.

In the summer of 2020, visitors to Berlin’s Hamburger Bahnhof were astounded by a huge rush of colour. Katharina Grosse’s sprawling sculptural painting It Wasn’t Us burst out of the confines of the historic exhibition hall, expanding out onto the museum grounds and over the façade of the adjoining Rieckhallen. “I am painting my way out of the building,” were the Berlin-based artist’s words.

“It Wasn’t Us” moves out well beyond the exhibition hall in Berlin in 2020. | Photo (detail): © picture alliance/Bildagentur-online/Joko Over the course of weeks, Grosse had created this expansive, kaleidoscopic piece that was not contained inside the building and sought ways to expand out into the open. “Grosse’s painting uses colour to transcend borders,” Julia Eckert, Professor of Political Anthropology at the University of Bern, explains. “She overwrites border zones with new contexts. What was there before does not disappear; it remains visible as a trace of something past that has lost its meaning. Fantastic entities emerge as part of the process.”

Using the pressure of a spray gun

This was not Grosse’s first foray into painting on a massive scale. In 2016, she exhibited several large-format and colourful panel paintings at the Frieder Burda Museum in Baden-Baden. She primarily relied on a compressor-powered spray gun to create the pieces, some of which were more than 30 square meters in size. “The questions I focus intensely on are: What can a painting look like today, what can the dimensions be, what contexts can it be embedded in?” she told Deutschlandfunk at the time. Turning entire rooms or outdoor spaces into works of art is also nothing new for Grosse. She has painted private homes, cafeterias and stairwells, as well as rubble or large mounds of earth. “The large painting or the ability of the painting to define an entire space and also to move toward architecture is totally fascinating to me.” 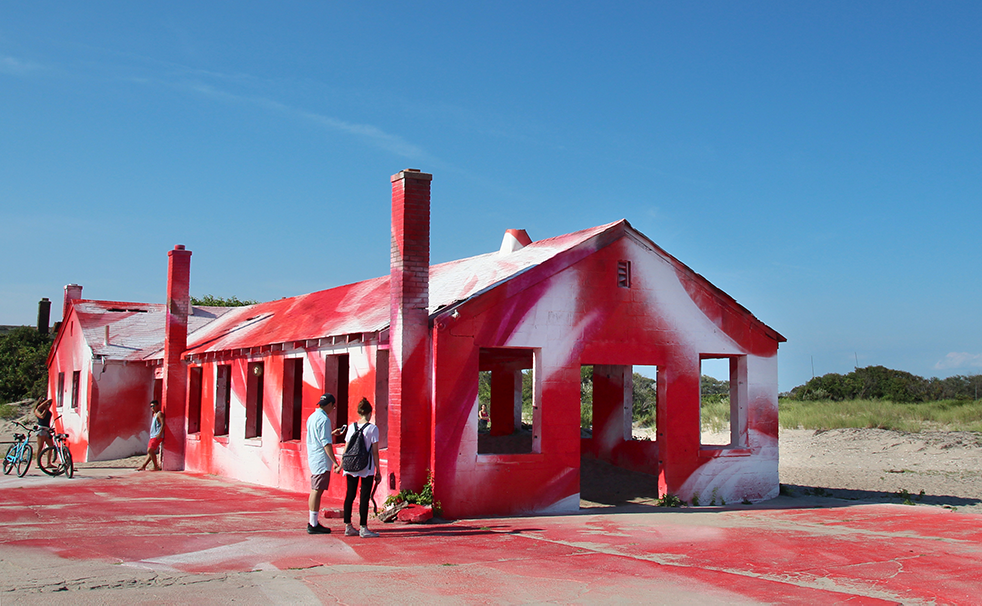 One of Katharina Grosse’s installations on a military barracks destroyed by hurricane Sandy on a New York beach in the USA. The image of the house sprayed in pink and red became a viral hit on Instagram, where it racked up thousands of downloads in just a few months. | Photo: © picture alliance / Christina Horsten / dpa

Born in Freiburg in Breisgau, the artist studied at the art academies in Münster and Düsseldorf. Today, she exhibits her works in international exhibition halls and museums, including the Museum of Fine Arts in Boston, the Baltimore Museum of Art, the Biennale di Venezia and MoMA’s PS1 Rockaway! program at Fort Tilden in New York.

Grosse has been honoured with awards such as the Villa Romana Prize, the Karl Schmidt-Rottluff Fellowship, the Fred Thieler Prize, and the Oskar Schlemmer Prize. She was selected by the German government as a jury member for the fellowships (2020-2023) at Villa Massimo in Rome, Casa Baldi in Olevano, and Cité Internationale des Arts in Paris. From 2000 to 2009 she held a professorship at the Weißensee Art Academy Berlin, and from 2010 to 2018 she was a professor at the Art Academy Düsseldorf.