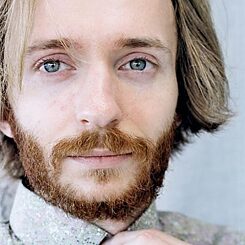 © Yana Iozeva Stefan Ivanov (1986, Sofia) is a Bulgarian poet, playwright, writer, dramaturg and journalist. He studied Philosophy, he has а Masters degree in Cultural Studies, and а PhD in Philosophy – at Sofia University St. Kliment Ohridski. Author of the collections of poems 4 sekundi lilavo (2003), Ginsberg sreshtu Bukowski v publikata (2004), Spisyci (2009) and Navytre (2013). His third book was nominated for the National Poetry Award “Ivan Nikolov”. His fourth book was nominated for the First Literary Awards of the “National Palace of Culture”. He has won the “Sofia: Poetiki” (2011). Co-author of “Medea – My Mother” (2013), which won The Union of Bulgarian Artists Award “Ikar” for best production. His play “Between the Holidays” was nominated for the “Ikar” in 2014 for dramaturgy. In 2017 his play “The Same Day” was staged at LPAC, New York. In 2018 he was a playwright in residence in the National Theatre of Luxembourg. In 2019 the animated short film “Tasks of the day” based on his poem of the same name qualified for the “Oscar” awards. Since 2003 he has published numerous articles, essays and other texts in dozens of different magazines, newspapers and sites. He has a blog – http://siv.sofiascape.com/.