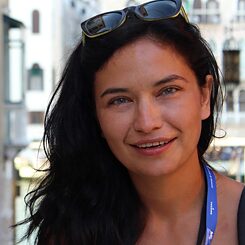 © Galina Georgieva Galina D. Georgieva is a film director, screenwriter and playwright.
She participated in several workshops for writing and script development such as: Sarajevo Talent Campus (2015), In the Palace Project Market (2015, 2019), CinemadaMare (2016), Clermont-Ferrand Short Film Market (2018, 2020), Transilvania Pitch Stop (2020), Elizabeth Kostova Foundation (2020).
Her first screenplay "Rehearsals" won the First Prize of the international competition of NISI MASA (2007). She has several shorts selected around the world. Her last short “French Cinema” was part of the official of 23th Shanghai International Film Festival (A category). She is the author of two feature-length documentaries: “Street Prose”, supported by the Sofia Municipality and selected at the Sofia International Film Festival (2013) and a film about the Bulgarian Academy of Sciences. Both were broadcast on the Bulgarian National Television.
Galina is the author of the absurdist play "Asteroid 35 111", based on the life of the Russian poet Marina Tsvetaeva, which was performed at the Municipal Theater "Vazrazhdane", broadcast on the Bulgarian National Radio and was nominated for First Prize in the national competition at the New Bulgarian University in 2018.
She is part-time lecturer at Sofia University "St. Kliment Ohridski" and author of the book Avant-Garde and Social Realism.