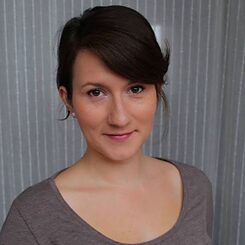 © private Ana Konstantinović (1987) is a theatre director, founder and artistic director of the theatre organisation Eho animato in Belgrade. She graduated in theatre and radio directing from the Faculty of Performing Arts in Belgrade, where she is currently in the final phase of her artistic doctoral studies. She works at the National Theatre in Belgrade as an editor of "Platforma", a programme whose aim is to educate theatre professionals and audiences in the field of performing arts.
She has taken part in numerous workshops and international projects, including Terre Promesse / Bussole rotte (Milan, Italy), Europe Unlimited (Hanover, Germany), Augenblick mal! (Berlin, Germany). She was the coordinator of the IFTR (International Federation for Theatre Research) World Congress in Belgrade in 2018. She has given a number of workshops for teenagers as well as some workshops aimed at young theatre professionals.
She has directed theatre performances, radio plays, public readings and performances, including the digital performances "Mirror Glaze" and "Venoms in the Kitchen" (La MaMa e.t.c & CultureHub, New York), "In der Glaskugel" (Kulturzentrum Pavillon, Hannover), "Der Sturm" (Regional Theatre Novi Pazar), "I at tempi" and "Home" (Paolo Grassi, Milan, Italy). As part of the theatre collective Eho animato, she directed the following performances: "Fragmente der Unruhe", "Die besten Absichten", "Rosmersholm", "Nach dem Spiel", "Biografische Skizzen", "Die Glasmenagerie".