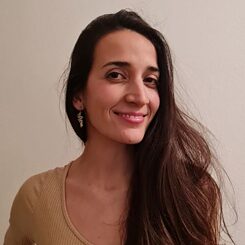 © Anita Čeko Anita Čeko was born in 1987 in Zadar, grew up in Split and lives and works in Zagreb. She studied Film Dramaturgy at the Academy of Dramatic Arts (2017) and psychology at the Faculty of Humanities and Social Sciences at the University in Zagreb (2013). She works as a dramaturge and screenwriter and is interested in working on drama texts. For her screenplays, she independently received supports from the Croatian Audiovisual Center (HAVC) for the development of scripts for feature films: The screenplay Viktorija (2020), which was also honored in the Ars Septima competition, the screenplay Čudna jada (Strange Sufferings, 2014), which was developed as part of the screenplay production program "Branko Bauer" by the Croatian Film Directors Guild (DHFR), and for the screenplay I bili smo pingvini (And We Were Penguins, 2013), which was later developed into a television drama series. As a co-screenwriter, she is collaborating on the development of the television drama series Sjene u mraku (Shadows in the Dark) at the production company Castor Multimedia (2019 and 2020). She is the screenwriter of the award-winning short film Stepska lisica (Steppe Fox, 2018) and the short film Lara (2011). At the film club Kinoklub Zagreb, she makes auteur films, including the multi-award-winning documentary-experimental Jabuka, tri dvopeka, jogurt, (An apple, Three Toasts, a Yoghurt, 2019) and the documentary Blizina (Closeness, 2019). Among her dramatic texts, Nenad X (2017) and Nasukani (Stranded, 2018) stand out. She is currently writing a drama text, preparing a documentary and developing a new drama text for the New Stages South-East program with the working title Što ćemo ostaviti u kadru (What Do we Leave in the Frame). She is an active member of the Croatian Screenwriters and Playwrights Guild (SPID) and the film association Kinoklub Zagreb.