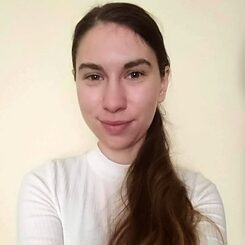 ​ © Lucija Klarić Lucija Klarić (1994) graduated from the Master's Program in Dramaturgy at the Academy of Dramatic Arts in Zagreb. Her plays have been performed at the Days of the Youth Branch of the Croatian Association of Drama Artists (HDDU) and the initiative “6 glumica traži autora” (6 actresses seeking an author) at ADU. For the text Put u zaborav (The Road to Oblivion, 2015) she received a special recognition from the jury of the “Marin Držić” Award. She writes scripts for children's series: Misi Mesi, which she developed with support from the Croatian Audiovisual Centre for television scripts (2017), and Slonko (2020), which was produced by Croatian Radiotelevision (HRT). Since her student days, she has been writing film reviews and publishing her texts on the portals Ziher.hr, Kulturpunkt and in the journal Hrvatski filmski ljetopis. In 2015, she received the Best Young Critic Award. In addition to her studies, she has completed two Erasmus internships in the UK, where she worked at the Royal Exchange in Manchester and the Bush Theatre in London. As a dramaturge, she has worked as an assistant at the Zagreb Youth Theatre (ZKM), on independent projects and on the play Vježbanje života - drugi put (Exercising life - Second Time) at the Croatian National Theatre “Ivan pl. Zajc” for European Capital of Culture Rijeka 2020. Her interest and passion are (video) games, on which she has worked as a narrative designer in her own production (the game Me&Superboy). She also deals with games in the field of theory, for which she received support from the Kultura Nova Foundation for art research under the title Pravila igre - alati za participativni teatar (Rules of the Game - Tools for a Participatory Theater) for 2021.