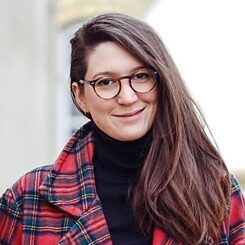 © Ivana Vuković Ivana Vuković, Master of Dramaturgy and graduate of Comparative Literature, was born in Split in 1992. She writes for theater, film and television and works as a writer and dramaturge on film and theater projects. She works on productions by the Zagreb Youth Theater (ZKM), artist collective Montažstroj, the Marin Držić Theatre in Dubrovnik, the Split City Puppet Theatre, PlayDrama Theatre, Theater &TD, Kufer Theatre and KunstTeatar. In 2019, she received the third prize at the "Marin Držić" competition for her text 55 kvadrata (55 Square Meters). In 2020, she received the Mali Marulić Prize for the dramatization of the novel Lažeš Melita (You Are Lying, Melita). The plays she worked on as a playwright or author have been shown at festivals such as MOT, BITEF and the Dubrovnik Summer Festival, as well as awarded prizes at the Days of Satire, the Naj, naj festival, the Mali Marulić competition and the TAKT Theater Fest, in addition to having been distinguished with the Croatian Theater Award. Her plays have also been performed as radio plays on the drama program of Croatian Radio. She is co-author of the documentary Nun of Your Business directed and produced by Ivana Marinić Kragić and Marinis Media, which won the audience award at ZagrebDox 2020, and is dramaturge of the multi-award winning documentary O jednoj mladosti (Once Upon a Youth) by Ivan Ramljak (Academy of Dramatic Arts, 2020).