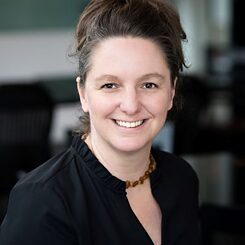 © Bo Lahola Photography & Design Ulrike Syha was born in Wiesbaden, Germany. She studied Dramaturgy at the University for Music and Theatre in Leipzig and worked for several years as an assistant to the director at Schauspiel Leipzig.  Since 2003 she lives as a freelance writer and translator of plays in Hamburg, Germany.

As a writer, Ulrike Syha won several awards and stipends - the "Kleistförderpreis für junge Dramatiker" (2002), a fellowship at Akademie Schloss Solitude (2006/2007), the "Hamburger Förderpreis für Literatur" (2010 / 2019), "Robert-Gernhardt-Preis" (2014), "Walter-Serner-Preis" (2015), "Autorenpreis des Heidelberger Stückemarkts" (2018), among others.  She has been writer in residence at Nationaltheater Mannheim (2009/2010), and she has been invited to the renowned "Mülheimer Dramatikertage" twice.  As a translator, she translates plays from British and American English, for example plays written by Martin Crimp, Caryl Churcill, Tariq Ali and Alan Ayckbourn, among others.