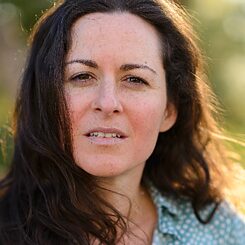 © Anestis Rovakis Anna was born in Athens in 1982. She grows up in Panama, Crete and Athens. She graduates with a BA in Political Sciences in Athens and Bergen in 2006 and a MA in Sociology and Media at the University of Fribourg. She studies at the Serge Martin Theater School (Geneva), graduating in  2013. She is attending workshops with Susan Batson at Interkunst (Berlin, 2014 and 2017). ), Andreas Manolikakis (Chair of Actors Studio New York) in Athens and Damian De Schrijver (TgStan-Belgium) in Geneva in 2018. She follows the CAS in Performance and Dramaturgy of Text at the HETSR and the University of Lausanne (2018-2020).
Anna is a performer for Lena Kitsopoulou in Vive la mariée (2013), in Little Red Riding Hood: The first Blood (2015) and in Cry (2018-2021) at Théâtre Saint-Gervais, Geneva. She collaborates among others with Philippe Quesne, Nikos Karathanos, Adina Secretan, the Cie Daniel Blake for the Opa project (2nd prize- PREMIO 2017). In the cinema, she plays the leading role in the film The night is still young, directed by Sri Lankan Indika Udugampola (Prize: Most Promising Director at the International Festival of Colombo, 2015). She founds the experimental theatre music company Cie Bleu in Haut Bleu en Bas with the musician Samuel Schmidiger (2015) and presentes the two first parts of her tetralogy BLEU and FUCHSIA SAIGNANT ( at La Bâtie festival 2019), and the third part, BLANC (Price of the SSA, 2020), at Le Grütli (2021). She presents the performance P.E.T.U.L.A. bye bye (2017) at Théâtre Saint-Gervais and KET in Athens. The epilogue of her trilogy, G.O.L.D. will premiere in 2022 at La Bâtie festival. She is invited by the theatre Le Poche to stage the play SAPPHOx written by Sarah-Jane Moloney (2020). She works as an author and dramaturgue for the dance piece Bis N.S (as usual) by the choregrapher Ioannis Mandafounis at the Opéra de Lyon (2021).