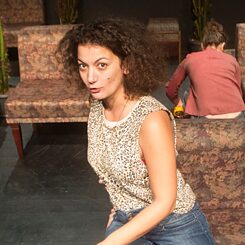 © Eva Vlassopoulos Eva Vlassopoulos was born in Athens in 1983. She studied acting at LAMDA (One Year Foundation Acting Course) and ALRA (Three Year Acting Course) in London, United Kingdom. She has directed Bumper Cars (2015), written by her, as well as Antigone‘s Matchmaking(2018) by surrealist writer Vasilis Ziogas.  Since 2013 she is a permanent collaborator of director Ektoras Lygizos and has worked as an assistant director with Katerina Giannopoulou, Christina Christofi, Aris Mpalis and Fiona Morrell. She has written a second play In Reference to(2020) which hasn't been performed yet as well as a TV pilot. In 2019 she founded Annee Zero Theatre Company. In March 2020, Bumper Cars was honoured by Eurodram, the European network for drama in translation.