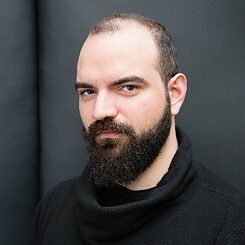 © Greg Liakopoulos Greg Liakopoulos was born 1986 in Athens, Greece and works as a director, dramaturg, actor and translator in Greece and in Germany. He studied Mathematics at the University of Athens, Acting at the Athens  Conservatoire and  Theater Direction at the Theaterakademie Hamburg. During his direction studies he worked on the development of new plays as well as on the direction of plays by Heiner Müller, Thomas Köck and Friedrich Schiller. His play about the Greek Civil War The Plague (directed by Katerina Giannopoulou) was staged during the 2016 Festival of the Experimental Stage of the National Theater of Greece. In January 2017 he presented his graduate project Blutmond about the 1923 uprisings in Hamburg. Then he worked at the Experimental Stage of the National Theater of Greece as translator and dramaturg of The Ridiculous Darkness by Wolfram Lotz (directed by Katerina Giannopoulou).

In 2018-19 he worked as dramaturg and performer at Schauspielhaus Hamburg (Blindness, directed by Kay Voges and about:blank, directed by Dor Aloni). In 2020 he wrote Danke, Deutschland! (directed by Dor Aloni, Kampnagel Hamburg) and directed A Spring Awakening (based on Frank Wedekind’s play, Sfendoni Theater, Athens). He has translated numerous German-speaking plays into Greek, including plays by Sibylle Berg, René Pollesch, Wolfram Lotz, Rainer Werner Fassbinder, Frank Wedekind. Invited by the German center of the International Theater Institute (ITI) to the 19th International Translators Workshop in Mülheim and received translation scholarships from the Goethe Institute and  the Federal Chancellery of Austria. Since 2020 he is a member of the German Committee of the Eurodram Network and a member of the teaching staff of the Athens Conservatoire Acting School. In the summer of 2021 he will work as dramaturg and translator of In A Year With 13 Moons by R. W. Fassbinder (directed by Katerina Giannopoulou, Athens Festival).