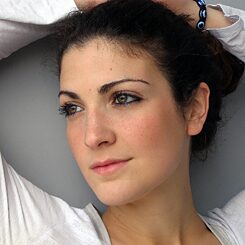 © Nefeli Maistrali Nefeli Maistrali was born in 1988. She grew up in Athens and as a teenager she was very fond of Greek literature, letters and art. After finishing High school, she was accepted in the Law school of Athens. A year later, at the age of 19, she decided to follow her true passion, Theatre. She was accepted by the Drama School of Athens Conservatoire, where she got her basic drama education and the best time of her life, until now. She graduated in 2011 and ever since, she has been working an actress in various productions of National Theatre of Greece, Athens and Epidaurus Festival, Onassis Stegi, Neos Kosmos Theatre and others. She has cooperated with several directors such as St. Livathinos, L. Koniordou, O. Papaspiliopoulos, L. Kitsopoulou, Th. Abazis, L. Meleme, P. Dentakis, Th. Zeritis, S. Spyratou, K. Papakontantinou and others. That same year-2011, she cofounded with some of her fellow students the “4 Frontal” theatre company, which still thriving. After a couple of years, she obtained her Law degree-just in case. In 2018, she started working as a dramaturge for her company by adapting literature for theatre (“Myrtos” by P. Matesis). That gave her the right push to start writing and in 2019, she completed her first play “Forty-seven”. In 2020, she participated in a five-month course on modern playwriting, organized by the Municipal Theatre of Piraeus (supervised by play writer Leonidas Prousalidis) following a competitive procedure. During that course, she had completed her second full-length play “Left-handers”, which stood out among the best three of the competition. She can play the piano and the cello. She can speak English and French fluently and last, she begun learning Russian.